How will the historic Trump-Kim Jong-un meeting change things?

Nothing untoward even happened.

What happens when two mercurial heads of state like United States President Donald Trump and North Korean leader Kim Jong-un meet in a third country for a first-ever summit meeting between the two countries? The two leaders holding a dialogue of the deaf and agreeing to disagree on everything? But nothing of the sort happened and the Trump-Kim summit at Singapore's Sentosa Island went off smoothly and the details that emerged indicate that the most anticipated event in international diplomacy in years had a fairytale finish.

Trump had two back-to-back major international assignments: G7 summit in Canada and then his now-on-now-off meeting with Kim in Singapore. Trump arrived in Singapore on his 72nd birthday after botching up the G7 summit.

He pulled the US out of the G7 joint statement after bitterly feuding with host Canadian Prime Minister Justin Trudeau and calling him "dishonest" and "weak", batted for Russia and stressed that G7 once again be made G8 with the re-inclusion of Russia.

It was an unsavoury moment unprecedented in the history of Washington's relations with the rest of the G7 powers. Thus, just before arriving in Singapore, Trump had alienated his traditional allies and cheered up American rivals such as Russia and China.

Trump's outlandish conduct at G7 summit and his "bull in China shop" kind of diplomacy had raised a question mark over his historic summit with Kim in Singapore. And that when not too long ago Trump and Kim had engaged in an imbecile spat. The year 2018 dawned with Kim cautioning America to remember that he had a nuclear button and Trump promptly giving it back, saying that his nuclear button was "bigger"!

This is what Trump tweeted then:

North Korean Leader Kim Jong Un just stated that the “Nuclear Button is on his desk at all times.” Will someone from his depleted and food starved regime please inform him that I too have a Nuclear Button, but it is a much bigger & more powerful one than his, and my Button works!

(The Trump-Kim spat over the size of their respective nuclear buttons became the butt of jokes on the social media, one of them at the expense of Delhi chief minister Arvind Kejriwal, jocularly quoting Kejriwal as saying, "No matter whichever button is pressed the vote will go to the BJP only!")

It was against this backdrop that Trump and Kim held their 41-minute-long summit in Singapore on Tuesday (June 12) over the future of North Korea's nuclear arsenal and the two sides pulled it off well. This was the first ever talk between a US and a North Korean leader.

The two countries have been enemies since the 1950-53 Korean War and leaders of North Korea and the US have never met previously, or even spoken on the phone.

The two leaders signed a joint statement that Trump described as "important" and "comprehensive". Trump said the summit went "better than anybody could have expected" and he "absolutely" will invite Kim to the White House. "Our relationship with North Korea changed today," Trump remarked.

After the summit, while Kim left for Pyongyang, Trump stayed back and addressed a press conference. At his presser, Trump made the following significant points:

1) The sanctions on North Korea will remain until Pyongyang destroys all its nukes. 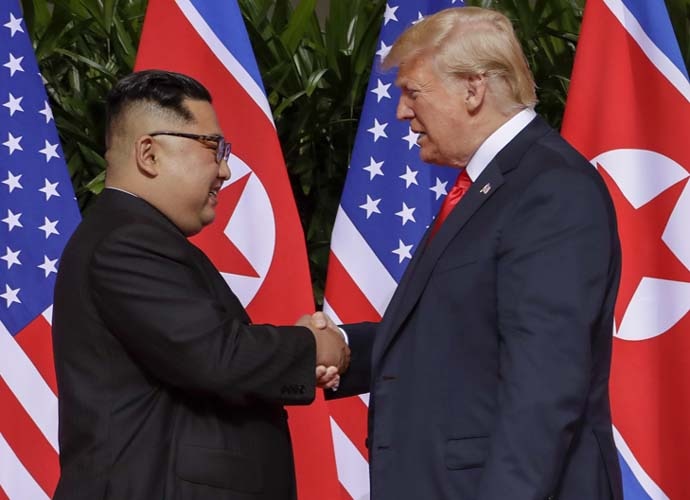 2) Trump said Kim told him that North Korea is already destroying a "major" missile testing site and remarked: "The past does not have to define the future," implying that the Washington-Pyongyang bilateral relations will no longer be inimical.

3) There are 32,000 US soldiers in South Korea who will now be brought back home, saving lot of money for the US.

4) Human rights violations in North Korea, a red rag for Pyongyang, were discussed at the summit.

Trump and Kim signed a joint statement after the summit.

Two important points stand out in this joint statement. One, Trump committed to provide security guarantees to North Korea but the document didn't specify those guarantees. Two, there was no mention of the demands made by the US previously for "complete, verifiable and irreversible denuclearisation" indicating that the Trump administration may not be as tough and hard-nosed with North Korea as it is with Iran on the nuclear issue.

Indian reaction: A googly to Pakistan

The Indian reaction to the Singapore summit was prompt and interesting. The ministry of external affairs statement, while welcoming the Trump-Kim summit, bowled a googly at Pakistan.

However, here is the portion where India took potshots at Pakistan without mentioning the country's name: "We hope that the outcomes of the US -DPRK Summit will be implemented, thus paving the way for lasting peace and stability in the Korean Peninsula. We also hope that the resolution of the Korean Peninsula issue will take into account and address our concerns about proliferation linkages extending to India's neighbourhood."

The proof of the pudding is in the eating! It's too early to say which way the wind will blow.

North Korean leader Kim is in with a whale of a chance for getting the coveted Nobel Peace prize, jointly with Trump. North Korea is at the cusp of milking a never-before opportunity to integrate his reclusive country with the rest of the world, like Myanmar has successfully done, and stop its overdependence on one country: China.

For China too there are good reasons that Kim walks his talk and denuclearises North Korea. A rogue North Korea repeatedly threatening several world powers with a nuclear attack is the biggest impediment for China in its bid to become a superpower. Therefore, China too is expected to play a positive role.

Also read: Why does Kim Jong-Un have a personal toilet? The world wants to know

#Us-north korea, #Kim Jong-un, #Donald Trump, #Trump-kim summit
The views and opinions expressed in this article are those of the authors and do not necessarily reflect the official policy or position of DailyO.in or the India Today Group. The writers are solely responsible for any claims arising out of the contents of this article.