Modi-Trump meet was not really a success for India. This is why

It was a get-to-know-one-another kind of meeting between the current leaders of the two biggest democracies.

The just-concluded first formal summit between Prime Minister Narendra Modi and US President Donald Trump must be seen as a "work in progress" by and large.

It was a get-to-know-one-another kind of meeting between the current leaders of the two biggest democracies and one should not try to look for concrete deliverables as none can be expected at such an early stage of Trump's presidency.

Perhaps the biggest point of interest over the Trump-Modi summit was what kind of signals Trump would give on Pakistan, and even more importantly, on Pakistan-related terrorism. We are none the wiser on that score after the summit.

For example, consider Trump's remark: "The security partnership between the US and India is incredibly important. Both our nations have been struck by the evils of terrorism and we are both determined to destroy terrorist organisations and the radical ideology that drives them. We will destroy radical Islamic terrorism.”

But here Trump is talking in general terms and talking about “radical Islamic terrorism”, a phrase he consciously shunned during his recent trip to Saudi Arabia. He is simply being pragmatic and definitely not targeting Pakistan and surely not taking a stand on the issue of Pakistan's alleged sins of omission and commission on terrorism. 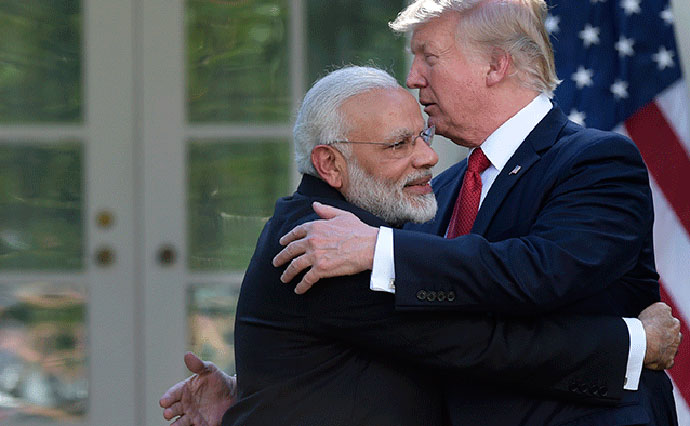 It was a get-to-know-one-another kind of meeting between the current leaders of the two biggest democracies.

In the same vein his characterisation of Modi as a “true friend” must be understood. He was just being polite. After all, hadn’t he described Pakistan as a “fantastic” country and Pakistani prime minister Nawaz Sharif a “terrific” person a few months ago?

Yes, India can derive considerable satisfaction on a so-called concrete deliverable as hours before the Trump-Modi summit, the US designated Kashmiri militant leader Syed Salahuddin, based in Pakistan-occupied Kashmir, as a global terrorist. But haven’t we seen similar steps announced by the US about Dawood Ibrahim and Lashkar-e-Taiba founder Hafiz Saeed years ago didn't change the equation for India one bit? The two terrorists are carrying on with their murky business as usual and Hafiz Saeed, though under house arrest, continues to choreograph terror attacks in India.

Therefore, designating Salahuddin as a global terrorist may be good optics, but it won’t help the Indian cause unless the US walks its talk. One should not look at the American optics with stars in one's eyes.

The ground realities are far different. The Americans have no interest whatsoever in siding with India on India-Pakistan rivalries or even on the issue of terrorism. The Americans are more bothered about only terrorism which affects them directly – like the Islamic State (IS) and those factions of Taliban, which are attacking American interests in Afghanistan. The Americans would have cooperated with India in a big way if India were to contribute troops to fight “radical Islamic terrorism” in Afghanistan and other theatres. But India hasn’t done that and will never do that. So, the Americans are not too sanguine in helping India vis-a-vis Pakistan.

The crucial question is whether India can genuinely claim that a substantive shift, forget about a paradigm shift, has come about in American views on Pakistan after the Trump-Modi summit? Or on China? The answer is firmly in the negative.

On China, the Indian challenge is far more complicated because there are two countries that Trump has openly wooed and praised: China and Saudi Arabia. Trump looks at the North Korean crisis as his biggest challenge and a very serious security threat to the US and he seriously believes that China is helping him big time in resolving the North Korean tangle.

This is despite the fact that Trump was all fire and brimstone over China during his election campaign. Trump is a kind of leader who believes in transactional diplomacy. There is hardly any strategic content about his diplomacy.

In other words, he will go to a higher bidder rather than bothering about the strategic calculus. Obviously, when China enjoys vastly improved relations with the US, as is the case currently, Pakistan too will feel emboldened.

Indians will do well to keep in mind this quote of Mark Twain (which is so true about the American diplomacy and even more so in the Trump era): “The principle of give and take is the principle of diplomacy – give one and take ten.”

#Pakistan, #Terrorism, #India-US Ties, #Trump-Modi summit
The views and opinions expressed in this article are those of the authors and do not necessarily reflect the official policy or position of DailyO.in or the India Today Group. The writers are solely responsible for any claims arising out of the contents of this article.