Trump's Sikh flier is no issue, but everything about the man is

The US presidential hopeful's thoughts clash with Guru Nanak's revolution based on the idea of equality, generosity and inclusiveness.

Is it a pan-Sikh issue if an Indiana Sikh featured on a Trump mailer is misidentified as a Muslim?

I don't think so, at least.

The snapshot did hurt the gentleman, Gurinder Singh Khalsa, personally though.

Quite rightly, the undecided voter with a flowing beard voiced his unhappiness publically, telling US media he isn't a Trump supporter and that the Republican presidential candidate espoused ideas that are at odds with his faith.

I am not an American, but I fully support and share Khalsa's views and so do many other diasporic Sikhs.

But it's unfair to single out the Trump campaign for misidentifying Sikhs. 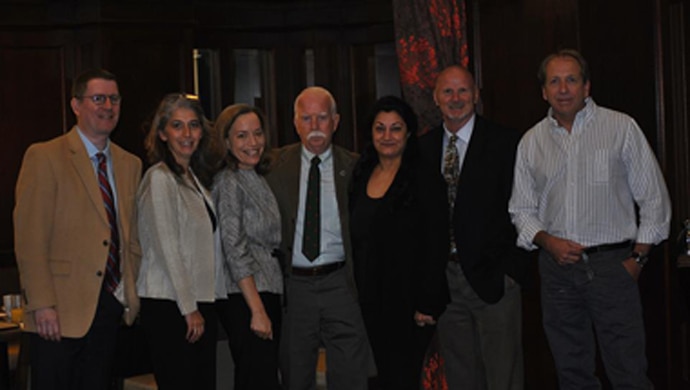 Ajit Kaur Maan (third from right), CEO of a US-based think tank, rejects Trump forthright: both as a Sikh and as a professional.

Even in India, many northerners are equally uninformed about diversities of the south.

For them, anyone with a dark complexion is a native of what they still call Madras.

Telling apart people of different ethnicities is challenging, and, sometimes, impossible, more so in a country like America that houses nationalities from across the globe.

Examples are also abound in India, where physical features and languages vary distinctly from one topography to another.

Even in Punjab, is it really possible to distinguish between the faiths of a pair of turbaned men? How can one tell who believes in whom? You never know one of them may be a follower of a sect forbidden by the mainstream Sikh faith.

Communities don't really have to launch a commercial PR blitz in order to make themselves known to the bigger world outside.

Some Sikh groups are investing a lot in the US on such public-relations exercises. Still, they haven't achieved much of a success as became evident from the Trump ad depicting Khalsa with a wrong religious stamp.

But across countries on both sides of the planet, if someone is hungry and has no money in her pocket, she would walk into any gurdwara around for free meals. Isn't it?

Guru Nanak started the first langar, or the community kitchen, when he spent Rs 20 to provide food to wandering holy men.

A revolution based on the idea of equality, generosity and inclusiveness that began with Rs 20 became a phenomenon that gave Sikhs and gurdwaras an international recognition over and above the community's history of hard work, military skills and valour. And that's where the Sikh and Trump thoughts clash.

Harinder Singh, co-founder of America's non-profit Sikh Research Institute and Panjab Digital Library, suggests Sikh voters in the United States take what he calls a wider view of the common good when they mark the ballot on November 8.

"Few South Asians, Indians, and Sikhs as Trumpeters or Clintonites are oversimplified modalities for stereo-typical model minorities while the world is witnessing racism, bigotry, and xenophobia in America," he warns. "Bollywood-style shows can’t change the polls showing 10-1 margins among India-Americans."

Singh recommends a deeper and overwhelming study of what Democrats and Republicans are offering at a bigger level.

"All voters, especially Sikhs, must examine all of the party programs on offer when voting this November. Parties make commitments across a range of public policies, and the voters need to assess a party’s overall balance of policies and not simply focus on a single issue– be it immigration, aid, security, education, ethics, India, liberty, marriage, environment, or human rights," he suggests. Dr Ajit Kaur Maan is president and CEO of Narrative Strategies, a US-based think tank.

She rejects Trump forthright, both as a Sikh and as a professional.

"Trump's rhetoric endangers US national security and national identity. It feeds into the Russian propaganda machine, it emboldens the extreme-Right White separatist movement, and it reinforces jihadi narratives," Maan warns. "Those interests may seem diverse but they all share a strategic interest in dividing the American people."

#Donald Trump, #US Presidential Elections
The views and opinions expressed in this article are those of the authors and do not necessarily reflect the official policy or position of DailyO.in or the India Today Group. The writers are solely responsible for any claims arising out of the contents of this article.