The heinous killing of this young army officer has been condemned by everyone across the board.

India has lost another brave soldier.

This time it is 23-year-old Lieutenant Ummer Fayaz. A resident of Kulgam, Fayaz had come to Shopian for a wedding. It was there, at a relative’s place, where terrorists abducted him, 10 pm Tuesday, and killed him. The young officer’s bullet-riddled body was found early Wednesday at Herman Chowk in the heart of Shopian.

The son of an apple farmer, Fayaz was commissioned in the services just six months ago. He was posted with a RAJRIF unit in Akhnoor. Fayaz, was a National Defence Academy (NDA) cadet and was scheduled to go for a "Young Officers Course" in September. 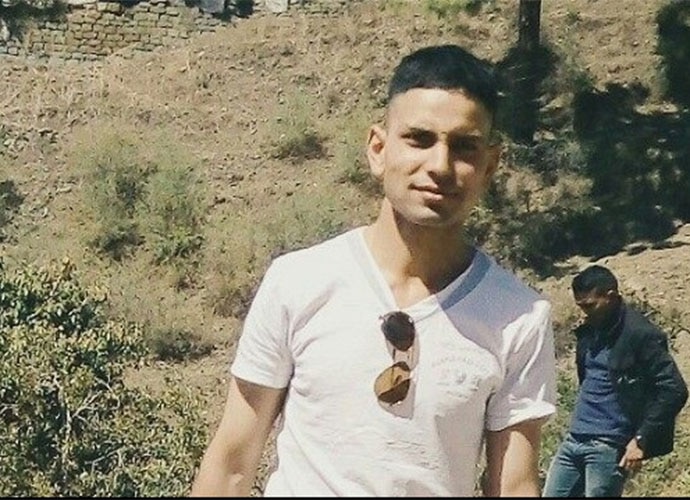 The heinous murder of this young army officer has been condemned by leaders and journalists across the board.

BJP leader Ram Madhav said, "People understand that these militants are loyal to no one and they kill their own people in the most dastardly and brutal ways. This is an act of absolute cowardice and I condemn it. The perpetrators will be brought to the books."

Minister of state (home) Hansraj Ahir said, “Let’s see what comes out in the investigation. They will get a befitting reply.”

Defence minister Arun Jaitley said, “Abduction and murder of Lieutenant Ummer Fayaz by terrorists is dastardly act of cowardice. This young officer from J&K was a role model... Fayaz was an exceptional sportsman, his sacrifice reiterates nation’s commitment to eliminate terrorism from the Valley”, he said.

Lt. Ummer Fayaz of 2RAJRIF was an exceptional sportsman, his sacrifice reiterates nation's commitment to eliminate terrorism from the Valley

In happier times. Lt Umar Fayaz in Kashmir, sporting the typical fauji haircut. Joined the Army after school, was on his first posting. pic.twitter.com/EzsK8hTzd9

A comparison no one wants to make. pic.twitter.com/BtXnZZYJHd

The killing of Lt Ummar Fayaz is yet another blot on J and K's bloody landscape. With every act of terror, space for any 'normalcy' shrinks!

Killing an off-duty unarmed Army Officer visiting his family in his home State, by terrorists, is the greatest act of cowardice.

But grief over a slain soldier is not enough. In India, it suddenly turns into a political issue and a test for patriotism. Amidst reports of stone-pelting at the officer’s funeral, came the whataboutery of politicians.

Baijayant Jay Panda, a Lok Sabha MP, accused a journalist of not condemning stone-pelters and the militants who murdered the officer.

That's why I vented my frustration & shared my temptation, not actually advoced pellet guns. OTOH, i see no condemnation of killers on yr TL https://t.co/1KCJdqjtPP

He wasn’t the only one. But this hardly a new phenomenon. Expressing one’s grief in not nearly enough in cases like these. One has to condemn killers, Pakistan and everyone wrong in the eyes of the Right wing to prove the fact that they care about India’s soldiers and sovereignty.

Just last month, retired IPS officer and BJP leader Kiran Bedi displayed her annoyance over the fact that actor Vinod Khanna - who at the age of 70 succumbed  to bladder cancer - was mourned more than the 25-year-old Captain Ayush Yadav who lost his life in a terrorist attack on an Army camp in Kupwara, Jammu and Kashmir.

It is almost eerily similar to the present situation in central India, where the tribal folk live at the mercy of the men in uniform, and CRPF jawans regularly die at the hands of Naxalites. In April, a deadly Maoist ambush of a Central Reserve Police Force or CRPF team that was helping build a road in Chhattisgarh's Sukma, took the lives of 25 jawans and injured six.

Instead of indulging in mindless I-am-more-patriotic-than-you contests, one should realise that ultimately, it is a grave loss for the nation. No one supports the deplorable militants who attack our officers, especially in such a cowardly fashion. But sympathising with the civilians in such highly militarised areas is hardly any reason to believe that one does not mourn the loss of the brave men in uniform.

It is time to move away from such pettiness and question the government on why neither situation, despite years of active efforts, is under control, and what they plan to do to fix this. Enough lives have been lost already. No more.