What rulers of India, Pakistan and Kashmir can do to prevent a Holocaust in the Valley

It must cease to be a battleground for competing hegemonic discourses in the region.

Psychologists often say that humans have a tendency to flee from various fears in life, and psychiatrists want them to triumph over the very same fears.

In Kashmir's context, the need to conquer fear has assumed new meaning in the last 27 years.

Top police and army officials have stated, on record, that the young boys who have joined the ranks of the armed rebels, following mass protests of 2008, 2010 and Burhan Wani’s killing in 2016, are “highly motivated” and “do not fear death”.

But this is not true about the militants alone.

Many youth in Kashmir belonging to new generation, especially those born after 1989, do not fear death. That is perhaps why Kashmir witnessed three summer uprisings of unprecedented nature from 2008 to 2016. The latest one that began in July this year and has lasted for more than four months.

This summer, the people, especially the teens, assembled in various grounds, parks, and Eidgahs to stage pro-Aazadi protests on a regular basis, knowing fully well that this overt expression of a political sentiment would prove costly. It certainly did.

In the state government’s brutal response, more than 1,000 youth were hit in their one eye or both eyes by the deadly pellets, ironically described as “non-lethal” by the government. 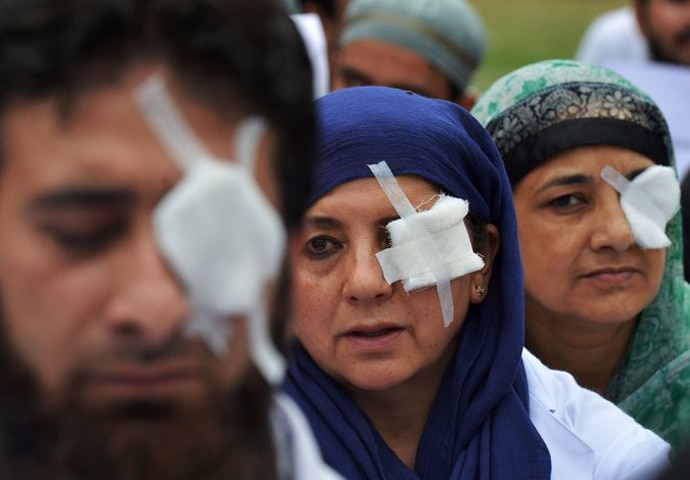 Can politicians in India and Pakistan afford to maintain status quo on Kashmir? Credit: Reuters

More than 10,000 youth received injuries as government forces foiled various pro-freedom demonstrations and public rallies by resorting to unprecedented use of force.

Tear gas shells, bullets, pellets and other types of ammunition were disproportionately used to quell the Azadi protests. According to Indian ministry of home affairs, nearly 7,500 persons were arrested in Kashmir since July 8, 2016.

In such a situation, what options do you leave for the youth to choose from? What do you expect when you deliberately choke all democratic space for dissent and treat participants of a public rally as combatants - and believe there can be a military solution to a political issue?

Kashmir has remained on the boil since July 8. The PDP-BJP government had to resort to the unjustified use of force to restore a semblance of normalcy and bring the situation under control in Kashmir.

Khurram Parvez, a prominent human rights' defender, was arrested under draconian Public Safety Act (PSA) and eventually released after 176 days. A government ban on Kashmir Reader, a Srinagar based English daily, continues unabated. Ironically, both Parvez and Reader are accused of “instigating violence” in the Kashmir Valley.

Why is Kashmir where it is today? Why are Kashmir’s youth losing the fear of death? Why has Kashmir stopped mourning the death of pro-India Kashmiri politicians after the Sheikh’s demise? After massive public participation in Sheikh Mohammad Abdullah’s funeral in September 1982, no pro-India politician including the late Mufti Mohammad Sayeed has enjoyed popular support or a grand funeral.

Why are the wrong policies of New Delhi and Islamabad forcing Kashmir’s fifth generation to adopt a new vocabulary where A is for Atrocities, B for Bullet and C for Curfew?

Can politicians in India and Pakistan afford to maintain status quo on Kashmir?

The Kashmir dispute is a big fat elephant in the room, which New Delhi neither wants to see nor acknowledge. This crisis of acknowledgment from New Delhi is the primary reason why Kashmir is burning today. Precisely!

Key Kashmir watchers are warning that if no meaningful efforts are made to move towards conflict resolution, what might follow would be too terrible to imagine. A peaceful resolution to this 69-year old conflict is a must. Fire-fighting exercises will not do. Strategy of attrition is a tried-and-tested failure. Cosmetic band-aid approach will bring no dividends either. Remember, Kashmir can erupt again.

Therefore, it is incumbent on all stakeholders to work towards conflict resolution at a time when Kashmir is relatively peaceful. Various stakeholders involved in this conflict must make the most of the islands of peace to avoid repeats of 2008, 2010 and 2016. 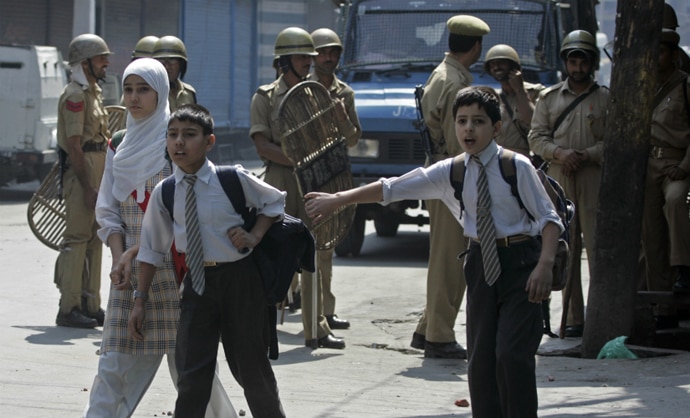 Kashmir is crying for a peaceful resolution. Credit: Reuters

Delhi must understand that Kashmir’s youth are no puppets of Pakistan. When large sections of India’s corporate media and chest-thumping politicians of the BJP constantly accused Kashmiris of being “Pakistani mercenaries”, “Pakistan sympathisers”, “paid agents”, “miscreants” or “trouble makers,” they feel insulted and humiliated.

In the absence of a peaceful political resolution to the dispute, Kashmiris are frustrated. Neither Delhi nor Islamabad can infuse a sense of defeat in them. They won’t forget. Memories do not vanish.

The people of Kashmir have their legitimate political aspirations which are being deliberately criminalised by New Delhi. There is an urgent need to see Kashmiris as who they are, not what they are feared to be.

Delhi’s endeavour to assert control in Kashmir through instrument of violence and military means is proving counterproductive on many counts. The pro-resolution sentiment is fast turning into anti-India sentiment. Experts are saying that India’s belligerence is completely washing away the middle ground in Kashmir. This is an alarming situation.

The political elite in India needs to face truths about Kashmir and tell them to its people.

In his meticulously researched book The Idea of India, well-known historian Sunil Khilnani argues: “In the cases of Kashmir and Nagaland, India enforced its claim to sovereign control of its territory by military means. Immediately after Partition, the first of several wars with Pakistan over disputed territory of Kashmir erupted.”

Khilnani further writes that “the capacity of the Indian state to contain armed insurgency — either through outright suppression or attrition” — remains huge. He makes a case that people in border territories and landlocked regions like Kashmir, Punjab and Nagaland are “witness to the tragedy of misjudging this capacity”.

However, the author also concedes that “the prospect of a government led by Hindu nationalists, were profoundly disturbing for a Muslim in Kashmir, a Sikh in Punjab, a tribal in Assam or a Christian in Nagaland. There is strength to such arguments, and it is hard not to feel that that the claims of separatists in Kashmir or Nagaland have the force of justice behind them.”

Similarly, India’s eminent historian Ramachandra Guha in one of his recent articles published by Hindustan Times argued: “While elsewhere in the country, Virat Kohli scores double hundreds, and R Ashwin claims his 200th wicket, records of another sort are being broken in Kashmir. Here the curfew has reached its century of days, the death toll is close to a century too, while bullet injuries and blindings now number in the thousands rather than hundreds. The records set by Kohli, Ashwin and company bring credit to Indian cricket. The records being set in Kashmir bring shame to India and Indian democracy.”

Unfortunately, New Delhi has fallen in love with its denials over Kashmir. In obsession, it prefers denial over rationality. When it comes to Kashmir, there are denials at three levels: one, the Indian government; two, its corporate-owned media; and three, the rabid forces in mainstream politics.

The Sharif government in Islamabad also needs to understand that Pakistan’s rhetoric will not resolve Kashmir. India’s rhetoric will not solve it either. Pakistan needs to respect Kashmir’s indigenous political struggle. Kashmir should not be used as a battleground for competing hegemonic discourses in the region.

Kashmir is crying for a peaceful resolution. Most Kashmiris favour friendlier relations between Pakistan and India. They want Kashmir to become a bridge of friendship between the two nuclear states.

That’s why there is an urgent need for statesmanship. But is there a leadership in India, Pakistan and Kashmir which is ready to make persistent efforts to prevent a Holocaust in Kashmir?

Watch: This young Kashmiri girl fights the odds to become a kickboxing champion

#Pakistan, #Kashmiris, #Jammu and Kashmir
The views and opinions expressed in this article are those of the authors and do not necessarily reflect the official policy or position of DailyO.in or the India Today Group. The writers are solely responsible for any claims arising out of the contents of this article.