Why India has to bite the Universal Basic Income bullet

A direct cash transfer to the poor is a powerful idea, and whichever political party comes to power at the Centre will feel compelled to move towards it in order to repair India's broken fiscal engine.

If crisis drives the reform, whoever comes to power on May 23 will have their task cut out.

The economy is in bad shape with a major fiscal crisis looming large — demanding urgent reforms.

If one looks for an opportunity, competitive politics has brought the Indian economy to the precipice of inevitable reform in the government’s budget and expenditure.

There are assumptions in certain quarters that these schemes will be implemented without cutting down on existing subsidy regime and thus, these will add a tremendous burden to an already precarious fiscal situation. The fact remains, this is more likely to nudge the government towards meaningful expenditure reform, as an idea of Universal Basic Income (UBI) is fundamentally based on realigning social and poverty alleviation programmes. 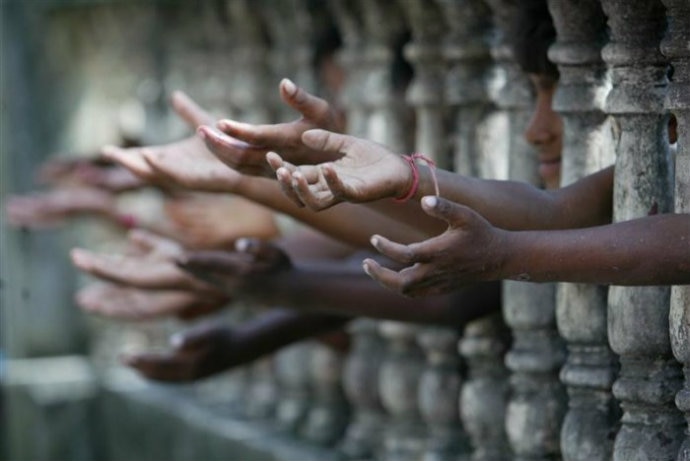 They need more: A large bunch of government schemes have definitely not benefited the poor sufficiently. (Source: Reuters)

Witnessing the experience of a farm loan waiver of around Rs 1 lakh crore across the country, two major states had finally resorted to specific cash transfer schemes for farmers (Ryuthu Bandhu in Telangana and KALIA in Odisha) — which, in turn, inspired the Centre to launch the PM Kisan Samman Nidhi Yojana of around Rs 72,000 crore. NYAY is a follow-up to the UBI discourse gaining momentum after the NDA government claimed savings of over Rs 90,000 crore (as on 31 March 2018) through better targeting of social programmes via Direct Benefit Transfer (DBT).

A direct cash transfer to the poor is a powerful idea — whichever political party comes to power at the Centre will feel compelled to move towards it to repair India's broken fiscal engine.

India’s fiscal situation may face additional pressure as the Centre and state governments may have to cut down on expenses amid falling revenues. Fiscal distress has forced RBI to pump more than Rs 2.8 lakh crore into the system by buying government bonds — this is as much as 70% of the net bond issuance by the government in fiscal 2018-19.

The Budget 2016-17 indicated that there were about 950 central sectors and centrally sponsored sub-schemes in India accounting for about 5% of the GDP by budget allocation. Watching. And Waiting: While a direct cash transfer is a powerful idea, India's broken fiscal engine must be repaired first. (Source: Reuters)

Had the states' schemes been counted, the magnitude of total schemes would have been even larger. Moreover, these schemes still persist. Economic Survey 2017-18 documented that most central sector schemes have been running for at least 15 years — 50% of them are over 25 years old. Economic Survey 2016-17 noted, “Clearly, there is a rationale for many of them, but there may be intrinsic limitations in terms of the effectiveness of targeting.”

The government has enough data to ascertain that the poorest areas of the country often obtain a lower share of government resources compared to their richer counterparts. The gross misallocation results in the exclusion of genuine beneficiaries. An exclusion error from 2011-12 suggests that 40% of the bottom 40% of the population is excluded from the PDS. The corresponding figure for 2011-12 for MGNREGS was 65%, points out the Economic Survey of 2016-17.

It is quite apparent that due to lack of capacity, bureaucratic inefficiency and corruption, benefits of these schemes or developmental expenditure as a whole have failed to reach the intended beneficiaries.

The second-biggest challenge of India's social programmes is their tokenism.

Burdened by a plethora of programmes, government schemes offer only a pittance to beneficiaries, thus leaving them uninterested in initiatives. India needs only a couple of mega social programmes with sizeable assistance to the needy. After the fiercely contested and promise-loaded Lok Sabha election under the shadow of massive rural distress and unemployment, here is what the coming government has to demonstrate:

It is inevitable that some form of UBI will be adopted for a nationwide rollout soon — and the new government will be forced to go for a radical overhaul of the expenditure regime simultaneously.

For the last few years, there have been consistent attempts to rationalise target subsidies (overall subsidies came down to 9% in the Union Budget 2019 from around 15% a few years back). Though it is difficult to abolish subsidies as they are aimed at specific political constituencies, the time has definitely come to radically rethink some of them. Even pruning in five major schemes, and petrol and food grains subsidies (1.48% of GDP) can yield necessary resources to fund UBIs and the like. If fund transfers by the Centre to states are included, this reform will curtail profligacy and bring the state's budget under desired discipline.

“No power on earth can stop an idea whose time has come,” recalling the famous Victor Hugo quote that Dr Manmohan Singh used in 1991, while introducing the famous economic reforms on the back of a disaster, is apt in this regard.

Going by the burgeoning debt of the Centre, states and private institutions, and the breakdown of social spending, India’s fiscal situation is inching closer to a 1991-type of emergency.

UBI or no UBI, India has to bite the bullet of a shocking fiscal reboot. As political discourse is in favour of populism, it could be an opportunity for the new government to significantly cut government expenditure by bringing in direct income transfers for the poor — the mega target of India's social spending.

#Economic Survey for 2018-19, #Kisan samman nidhi yojana, #Narendra Modi, #Rahul Gandhi
The views and opinions expressed in this article are those of the authors and do not necessarily reflect the official policy or position of DailyO.in or the India Today Group. The writers are solely responsible for any claims arising out of the contents of this article.