For Unnao rape victim, what good governance? If a CBI probe overseen by Supreme Court is her only hope, that says a lot

Kuldeep Sengar is finally expelled from the BJP and the UP authorities give the Unnao rape case sudden attention after the SC takes cognisance. The contrast with earlier is striking.

Much has been said on the Unnao gangrape case.

The Uttar Pradesh police has apparently gone overboard trying to show that the key accused, former BJP MLA Kuldeep Singh Sengar, is not the culprit. BJP spokespersons also did not tire of holding a brief for the MLA by repeatedly trying to impress on those hearing them that the victim’s two aunts had died in an “accident” last Sunday (July 28, 2019). It was only later, after nation-wide outrage, that the BJP top brass reportedly advised the UP leaders to play down their “defence” for the MLA.

In latest developments, MLA Kuldeep Singh Sengar has been expelled from the party.

Earlier on though, in a classic U-turn, within minutes of the BJP leaders in the capital reportedly asking the state cadre to tone down support for Sengar, the newly-appointed UP BJP chief, Swatantra Dev Singh, who assumed charge a few days ago, reportedly declared that Sengar “was suspended from the party a year ago.” However, he had no record to substantiate his claim. Even the disciplinary committee of the UP BJP feigned ignorance about Singh's declaration. Shortly thereafter, the Yogi Adityanath government recommended a CBI probe into the case.

The Centre on Tuesday handed over to the CBI the probe into the truck-car collision that left the Unnao rape victim critically injured(@abhishek6164/@ShivendraAajTak) https://t.co/9eh8d4a9c6

“How can you call it a conspiracy when the investigation is still on?” was BJP spokesperson Sudhanshu Mittal’s purported defence even until a day ago.

He also sought to argue on TV channels that there was nothing wrong about the security personnel not accompanying the victim when she was travelling.

The victim was allegedly gang-raped by the MLA and his henchmen in 2017. Knowledge of this came into the public domain only after the helpless victim attempted to immolate herself in front of the chief minister’s residence at Lucknow in 2018. Within days, her father — who tried to protest against the MLA in Unnao — was initially framed in a criminal case and then allegedly beaten to death in police custody.

On Sunday, the victim was travelling from Unnao to Rae Bareli in a car with her aunts and lawyer, when an empty truck rammed into the car, killing both her aunts and leaving her and her lawyer battling for survival at Lucknow’s King George Medical University (KGMU). 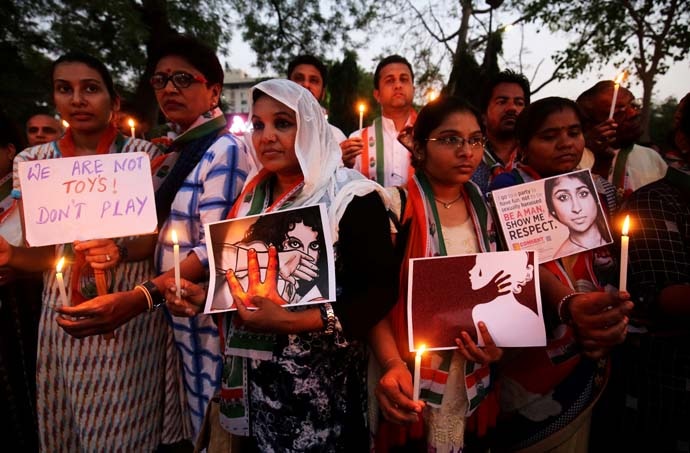 Citizens Protest Rape: But apart from the Supreme Court, has anyone noted their anger? (Representational image: Reuters)

Prima facie, the “accident” looked straight out of a grim Bollywood film. The only difference was that unlike a movie, there was no hero here to help the poor victim.

The only ray of hope for the victim and her traumatised family now is from the Supreme Court.

Ever since she was allegedly warned by Sengar and his cohorts to stop pursuing the case, the victim and her family have been appealing for help. However, all their appeals fell on the deaf ears of the state government and its authorities. The Chief Justice of India, Ranjan Gogoi, has taken cognisance of a complaint sent to him by the victim’s sister and aunt, and sought a detailed report of the case.

CJI Ranjan Gogoi said the court will try to do something constructive "amid this highly destructive environment".https://t.co/XrwUaNb7h7

As soon as the state authorities got a whiff of the apex court’s reaction to the complaint, they suddenly rose to the occasion. They are now reviewing the 33 written complaints by the victim and her family over the past year. These complaints were sent to authorities at various levels, including the chief minister — however, none of the applications got any positive response from anywhere. In fact, the local police superintendent in Unnao had gone to the extent of allegedly calling the complaint “baseless” even until a day before the CJI sought a detailed report.

Hours after the accident, UP Director General of Police OP Singh was apparently busy giving statements to the media like, 'Prima facie, it appears to be an accident which occurred on account of the heavy rain.'

Barely 24 hours later, the forensic team had dutifully substantiated the DGP’s claim, by reporting that the accident occurred because of skidding of the truck in the rain. Holding a brief for the cops, who, despite being detailed for the victim’s security, did not accompany her on the fateful day, Singh had gone to the extent of reportedly stating that “the victim and her family themselves told the security team that their car would not be able to accommodate them — hence, they would go unescorted.”

Evidently, the Supreme Court’s intervention has put Sengar’s defenders in a fix now.

They are busy trying to wash their hands of the matter by coming up with all kinds of alibis. How can he explain the mess over the horrific Unnao case? (File photo: Reuters)

“The state government had already recommended a CBI probe”, “MLA Sengar was sacked long back”, “necessary action will be taken against the security personnel if they are found guilty of willfully not accompanying the victim on their trip to Rae Bareli”, “the state police has lodged a fresh case of criminal conspiracy and attempted murder against the accused”, are all now the statements being issued by those in power.

These obviously reflect a change in stand since the Supreme Court’s intervention.

The ruling dispensation, however, still has no explanation on chief minister Yogi Adityanath apparently sharing a dais with Sengar’s wife during a political rally sometime back. Worse, BJP rabble-rouser and Unnao Lok Sabha MP Sakshi Maharaj had openly visited Sengar in jail, it is said, to thank him for all his (Sengar’s) support during the last Lok Sabha election. Significantly, Sengar commands large following of the powerful Thakur community in the constituency.

The opposition has sharpened its attack on the ruling dispensation for shielding the accused MLA. Yet, there is a growing feeling that the victim — who is battling for her life — may get justice only if the CBI probe is carried out under the close watch of the apex court, and the case is transferred to a fast-track court — outside the state.

#Unnao victim critical, #Supreme Court, #Yogi Adityanath, #Kuldeep Singh Sengar
The views and opinions expressed in this article are those of the authors and do not necessarily reflect the official policy or position of DailyO.in or the India Today Group. The writers are solely responsible for any claims arising out of the contents of this article.