Why the Naxal is the proverbial Beast

The Beast, or the Naxal, faces a strange trap. Love from Beauty, the liberal, who wishes to appropriate him. Hatred from others who wish to destroy him.

Apropos the recent media fever around the “Urban Naxal”, I am implausibly drawn towards an unlikely story: Beauty and the Beast.

Beauty, the girl in the story, as well as her father, the merchant, were not initially aware that the Beast was not really beastly but had a beautiful heart and was a kind and generous soul. The Beast had to endure being misunderstood, being portrayed as a dangerous, bloodthirsty being. It is only much later that the Beast gained acceptance and the truth came out.

Does this story not remind us of the ongoing spectacle around the 'Urban Naxal'? The beastlier the BJP tries to present the Naxal, the more beautiful it appears to the liberals, particularly with the #MeTooUrbanNaxal now trending among the liberal twitterati.

Recall that the Beast was living under a curse. Under the term “Urban Naxal”, it is as though the beastly Naxal has got a new lease of life — if not a full appreciation of its beauty! (Photo: Disney)

If not for the curse, it was actually full of beauty. It had to win the heart and love of a girl in order to shed itself free of its beastly trappings. The Naxals started to get this love when Arundhati Roy went and "walked with the comrades". Like Beauty's father who was worried about her fate in the hands of the Beast, liberals expressed their disapproval and anguish at this “walk”. Those like Ramchandra Guha would attack Roy for romancing the Maoist ideal.

But Beauty, once inside the palace — in the den of the Beast — already found everything full of enchantment.

In this enchanted world, words and things overflow with meaning. I hope readers have not forgotten how “biscuits” are actually “jungle post”, a coded message, or a letter full of poems. She is overpowered by the fleeting image of a beautiful young man, who appears everywhere but is not to be found anywhere.

In the midst of the violent Naxals, Roy finds a saintly and pious Gandhi, the “Gandhian with the gun”. Beauty is possessed by this thought: is the Beast holding this “handsome young man” captive inside his palace? Is the beautiful Gandhi (which, I insist, need not be the historical Gandhi) really trapped inside the bosom of the beastly Naxal?

Alongside these accounts of this enchanted world, we were witness to the UPA government's attempts to destroy it. Chidambaram wanted to destroy it, not since he did not know that there is a Gandhi in the bosom of the Beast, but precisely since he sensed this Gandhi, he seemingly wanted him gone. We had a replay here of the scene in Dostoevsky's Brothers Karamazov where the supposed protector of Jesus, the Grand Inquisitor, himself threatens to kill God.

Not even the unsuspecting Maoist leader, Azad — who was, in all sincerity, preparing for talks in 2010 with the government — was spared. So much so that Swami Agnivesh who was mediating for the talks had to personally apologise for having convinced the Maoists to agree for talks, and the latter then effectively walked into a murderous trap. 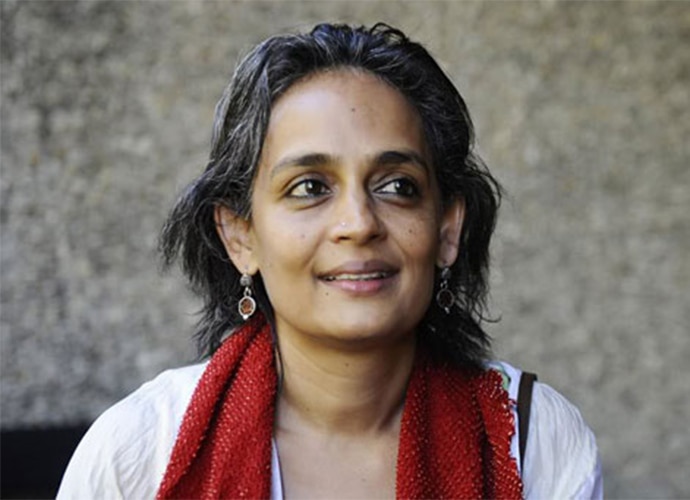 When Beauty Visited: The Naxals started to get love when Arundhati Roy went and "walked with the comrades". (Photo: Indiatoday.in)

It is as though the moment Beauty discovered that the Beast is not really a Beast, but a beautiful soul, she decided to deny him her love and keep him trapped as the Beast. And then the fake Beauty moves around town as the real Beauty. Hence, you have liberals like Guha, who present Naxals as similar to the right-wing extremists. Speaking after the recent arrests of “Urban Naxals", he wants us to avoid both, the Maoists and the Bajrangis, and, instead, defend the middle space of democracy!

He forgets that this “democratic space” is held in place by the radical imaginary opened up by the Naxals, as I tried to show earlier.

Liberals today are dreading the prospect of having to declare themselves Naxals. They secretly resent the new voices like #MeTooUrbanNaxal. They will be forced to soon realise that human rights and democracy is not “a middle space” of the fence-sitters, but of those who take sides.

The power of the Naxal enchantment remains. The Beast retains its charm.

Post your comment
#Revolution, #Beauty and the beast, #Liberals, #Urban naxal
The views and opinions expressed in this article are those of the authors and do not necessarily reflect the official policy or position of DailyO.in or the India Today Group. The writers are solely responsible for any claims arising out of the contents of this article.