Uri attack: Martyred soldiers were our children, and the mothers have a question

The secular media’s 'shut up-don’t-tell-us-anything-we-know-what-to-do' attitude is not going to help anyone.

We can continue counting our dead and paying rich, highly patriotically worded homages to our soldiers.

But the fact remains that like Pathankot, the Uri attack occurred inside an army camp and we lost our boys on Indian soil, not fighting a battle with the enemy across the border.

The mothers of the soldiers, like our mothers, are asking, how long do we have to continue the oft-repeated homages and tributes and see no revenge being taken.

Do we have none among us who would courageously declare that yes, the soldiers are us and we WILL take revenge on the perpetrators of this cowardly attack even if we have to have Abbottabad repeated - on our strength?

We can try to look very nice to all, including the US who spares no opportunity to sermonise us on human rights and never speaks a word against (Hurriyat leader Syed Ali Shah) Geelani or his supporters.

The stark truth remains that we have to fight our battle on the strength of our own sinews and formulate a policy on J&K terrorism - what we want to do there in the next 10 and 20 years.

Show that we mean business. Unless we are able to save the honour and lives of our people, patriotic people, and give soldiers a clear line of action, setting a target and architecting a mission, the secular media’s  "know-all" and "shut up-don’t-tell-us-anything-we-know-what-to-do" attitude is not going to help anyone.

The enemy is within. They operate from the chambers of news channels, they operate from literary festivals, they give arsenal and support to the enemies of the nation, forming Amnesty International, civil liberty associations, Left-of-Centre groups demanding to be "considerate and lenient" to those who kill our soldiers.

These are the news media that show, in a sympathetic light and with a nursing attitude, the hospitalised traitors who were stoning and abusing our men in uniform.

These are the self-styled journalists, editors, civil liberty sirens who get all the space in the columns of a media that's run by a traders’ guild, who practice the worst kind of ideological apartheid on their news desks and op-ed policies denying a different opinion and a view from the other side.

You take up any newspaper - specially the English ones - their bias against those who have a different opinion is continuing since the days of Syama Prasad Mookerjee, may be even before that.

There are a set of writers, editors, bureau chiefs whose names would tell us they are against a particular ideological section of the society since they were inducted into the profession as a journalist.

Under their regime, columns are closed to the other option unless you speak their "language", have an accent show they can criticise the Ayodhyawallas too.

All the doors to fellowships, awards, invites to thinktanks and banquets are closed and protectively guarded by this cartel. They still stand happily with the Geelanis, publish their full-page interviews and life stories, and in the name of being "objective" they do not hesitate to print their abusive, strong language against the state apparatus, that means they have no qualms writing against the soldiers too.

We saw a journalist publishing a compassionately warm interview with the son of a traitor who was hanged at the orders of the Supreme Court.

Pardon me, have you ever seen or read an interview with the daughter of a martyred soldier? Have you ever seen a prime-time discussion with the parents and wife and sister of the soldiers who gave the supreme sacrifice in Kashmir, defending the motherland? 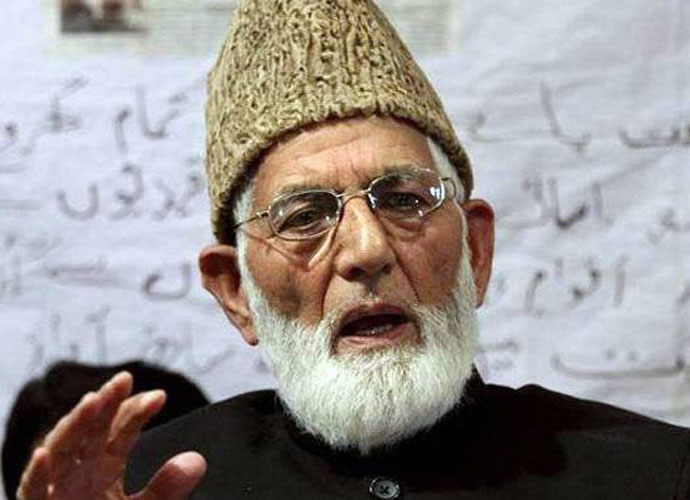 There are a set of writers, editors and bureau chiefs who stand happily with the Geelanis. (Photo credit: India Today)

Because these journalists, with a Pakistani mentality, treat our armed forces like mercenaries and agents of the state apparatus. For them, romanticising a (Burhan) Wani is much more paying and satisfying than writing a story on the life of a soldier and his village and his parents.

If terrorists have to be blamed for their cowardly act, these writers with an Indian passport too are to be blamed for creating a facilitating atmosphere for terrorists, through their coloured discussions  and editorials that influence judgements, make the state apparatus act softly and disunite society for pushing the government towards decisive action.

These are the editors and writers with sympathy for the terrorists, who form groups and societies to pressure the judiciary to free attackers of Parliament and award sympathisers of Naxalites and Maoists with a berth on the (erstwhile) Planning Commission.

They write regularly in Pakistani newspapers like Dawn and The News and many others. Their columns also appear in Kashmir Valley’s poisonous and anti-India newspapers. Just have some of them analysed and try to find out if they ever wrote a single line condemning the terrorists and praising the soldiers. Never.

Instead they started using the word "militant" for these cowardly terrorists as if they are part of a highly motivated revolutionary force.

It's time for the nation, across party lines, to pay homage to our brave soldiers; they were our children, they were Mother India’s sons.

And join in solidarity against the weak, spineless, de-Indianised tribe of editors and media moguls who have been treating their fellow Indians with a disdain and contempt that they do not deserve.

#Kashmir, #Pathankot Attack, #Uri attack
The views and opinions expressed in this article are those of the authors and do not necessarily reflect the official policy or position of DailyO.in or the India Today Group. The writers are solely responsible for any claims arising out of the contents of this article.