It's all about the money: Why America and Donald Trump let Americans with guns kill innocent people

Americans need to be protected from other arms-wielding Americans. But will President Trump listen?

In his first public remarks on Monday after the pair of shootings in El Paso, Texas, and Dayton, Ohio, over the weekend, US President Donald Trump blamed the "glorification of violence", white supremacy (incidentally, to many, that represents his own standpoint), the internet, video games, "troubled youth culture that celebrates violence”, and mental illness for the carnage that left at least 31 dead and 53 injured in less than 24 hours.

We assume that President Trump believes every action to be violent and worth condemning, except the act of pulling the gun's trigger. Because the blame was placed on the world and beyond, except the obvious — the gun laws in the United States of America.

Here, President Trump did the usual dodge that he does on all issues of concern, and where he does not want to take a stand or has a stand conflicting with the welfare of the masses — from global warming to guns. What will it take to wake up? An activist outside the US embassy in Mexico City after the back-to-back mass shootings. (Photo: Reuters)

In the most recent session of the US Congress that ended on August 2, 2019, the Senate could not pass substantial gun violence legislation — yet again.

Ironically, the session ended just a day before the Walmart shooting. The US Congress has repeatedly failed to address the issue despite the frequency of mass shootings and violence. The law could not be passed in the Republican-controlled Senate because of resistance from those who hold the majority — the Republicans. Clearly, this is a political dynamic that is not likely to change any time soon. Even when the US House of Representatives approved two bills in February 2019, to toughen background checks for gun purchases, the White House threatened a presidential veto if those measures passed Congress.

If you are new to the American stand on guns and gun violence, the above sequence of events in the Senate might have surprised you. However, for those who have dabbled even remotely in America's history on the right to keep and bear arms, the debate around gun laws and the history of mass shootings in the country, this was obvious.

After all, every shoot-out in the country follows a predictable pattern when it comes to reactions.

The American left makes outrageous calls for amending the laws and checking the possession of guns, the American right click their tongues in a show of sympathy — and the President delivers a passive statement from a text that is almost a template.

The American media (and spectators) cover all the actions (or the lack of it) and reactions, and in a day or two, it all goes back to the everyday humdrum of other affairs.

President Trump, on Monday, did call for stricter background checks and other possible steps — including a "red-flag" law that would make it easier for law enforcement to identify mentally ill people who should be banned from purchasing guns.

Not a word more. But why? President Donald Trump announces that USA will drop out of the Arms Trade Treaty in April 2019. (Photo: Reuters)

Trump has admitted in the past that he is a big supporter of the Second Amendment to the United States Constitution — that protects the right to keep and bear arms.

@LCBeaudoin Big Second Amendment believer but background checks to weed out the sicko's are fine.

In fact, he is a Life Member of the very powerful US-based gun rights advocacy group, National Rifle Association (NRA), and has said that he is "proud of their service in protecting our right to keep and bear arms."

In an interview with gun magazine AmmoLand in 2015, he said, “I certainly stand by my opposition to Gun Control when it comes to taking guns from law-abiding citizens. To the Left, every gun is an assault weapon. Gun control does not reduce crime. It has consistently failed to stop the violence. Americans are entitled to protect their families, their property and themselves.”

In fact, the United States under President Trump dropped out of the Arms Trade Treaty signed during the Obama administration. The Arms Trade Treaty (ATT) is an agreement that regulates the international trade in conventional arms and seeks to prevent and eradicate illicit trade and diversion of conventional arms by establishing international standards governing arms transfers.

In a strong counter to President Trump's statement on Monday, and his views in general, former President Barack Obama issued a statement that wonderfully elucidated how the gun violence debate was giving way to extremism in America.

In his statement, Obama argues that despite claims that tougher gun laws won’t stop all murders, there is evidence to show that stricter legislation could save lives.

“They can save some families from heartbreak. We are not helpless here. And until all of us stand up and insist on holding public officials accountable for changing our gun laws, these tragedies will keep happening.” 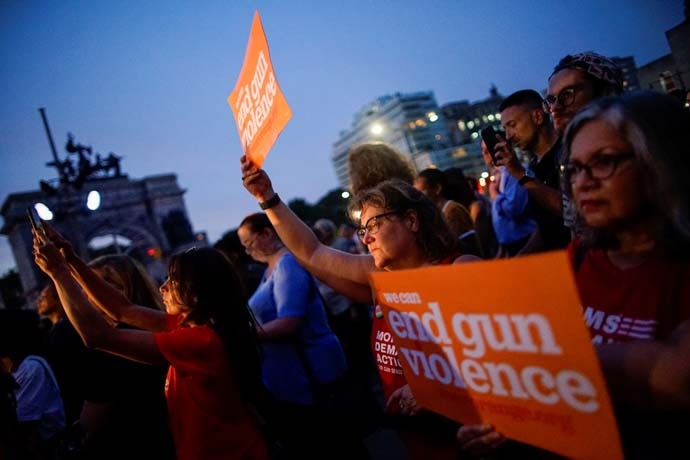 Such grief: Americans gather to remember victims of the mass shootings at Dayton and El Paso. (Photo: Reuters)

We wonder what President Trump is talking about when he says that Americans are entitled to protect their families, their property and themselves.

Protection from what, President Trump?

Because the strongest protection that Americans clearly need is from other Americans. History stands proof that the right to bear arms has caused more harm than good. If President Trump wakes up to this reality, moves to amend gun laws and makes them stricter, he will perhaps salvage some damage he has inflicted over his tenure.

However, as he has assured us from the very start, that is as good as expecting him to accept that climate change is real.