How Uttarakhand made a mess of dealing with forest fire

Environmentalists suggest that the pine needles need to be removed on a regular basis.

Irrespective of what political fires burn in Dehradun, the capital of Uttarakhand, every year raging forest fires destroy thousands of hectares of the state's forest land. This year has been particularly worse. There is much controversy about what causes these fires and why nothing is done to avoid them or control them.

Usually the monsoon arrives and douses the fires but not before tremendous damage has been done to the ecology. It does not matter which political party is in power in Dehradun, the forests of Uttarakhand demand attention. They demand a crucial and critical look at why they burn, year after year.

For more than a few weeks, the inferno in the jungles of Uttarakhand has begged our attention. Now finally, the National Disaster Response Force (NDRF), the Indian Air Force (IAF) and the Army have been called in to help gain control over the out of control forest fire.

Ask experts and they will tell you that there are many reasons for these fires. From the parched land and low seasonal rains to burning of pine needles by the local population, climate change and the government’s inability to formulate a sustainable forest policy, all these reasons are responsible.

However, it is human greed that tops it all. It is plain and simple, we are cutting too many trees and not bothering with the way land is used in the country. We are disturbing the ecological balance so dramatically that forest fires that were controlled naturally are a thing of the past.

Thirteen districts have been affected by the forest fires that have already claimed several lives. Of these districts Pauri, Nanital and Tehri are the worse-affected. Ecologists say that this is because of the large presence of pine trees in the forests of this area. Pine is considered highly inflammable. The fact that the dried pine needles that carpet forest floors kindle fires does not help the issue. 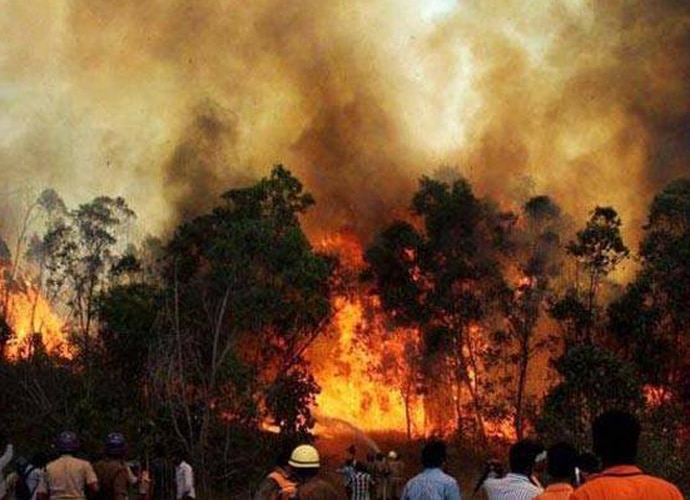 Oak has always been prominently found in the forests of Uttarakhand. Slowly, over time, pine has begun to spread faster and wider than anyone could have estimated. While some may wonder why there is a controversy over pine or oak - a tree is a tree – but what is glaring is the impact the tree species have on the forest and on the local ecosystem.

When oak trees are in majority in a forest they support it in many ways. Not only do many other species of plants flourish in the area that surrounds oak trees, but they are actually better for the soil in many other ways. The leaves of the oak trees fall to the ground and quickly turn to humus and add to the top soil. This means that the soil around an oak tree continues to become fertile. The roots of the tree hold the soil in a secure manner.

In contrast, the pine is a sturdier and tougher species that spreads quickly and virtually overtakes the area in which it grows. The needle-like leaves do not substantially add to the moisture in the jungles. They are acidic and when they dry up and fall to the ground, they don’t allow any other plant life to grow on the soil. In other words, a pine tree does not support the local ecology in the forest.

The State of Forests Report 2015 names Uttarakhand as one of the few states where forest cover has reduced substantially. In contrast, in states such as Madhya Pradesh, Chhattisgarh and Arunachal Pradesh the forest cover has increased.

Is it not ironical that the state that takes pride in being the "Abode for the Gods" is unable to care for its forests? Every year, the forest fires cause damage worth crores of rupees. And yet, the state does not have a comprehensive plan to deal with the situation. Environmentalists suggest that the pine needles need to be removed on a regular basis and can be used to produce resin. Adequate attention and pre-emptive action have not been taken up by the forest department and the state to control and monitor forest fires.

It is strange that when hectares of jungle have been incinerated there has been no mention of the impact on wildlife. While the state department has called and received help from the Centre, it has made no mention of what the animal husbandry department is doing to care for injured animals and birds. This is also a time of crisis that poachers can exploit and the wildlife in the forests of Uttarakhand requires to be protected. It is time to take the forest department to task and question its inaction.

India has promised itself and the world that in a bid to fight climate change it will increase its forest cover and improve the quality of its forests. However, forest fires such as those in Uttarakhand are worsening the situation and need to be dealt with efficiently. The forests of Uttarakhand must be protected and enriched so that they continue to be the lungs of the nation and the richest treasure of the state.

#Environment, #Ecology, #Dehradun, #Uttarakhand forest fire
The views and opinions expressed in this article are those of the authors and do not necessarily reflect the official policy or position of DailyO.in or the India Today Group. The writers are solely responsible for any claims arising out of the contents of this article.