Who will answer what led to Varanasi stampede. Modi?

Why is it that we are always fed with lies?

What exactly happened on October 15 on the Malaviya Bridge? The before and after images coming out of the stampede ground near Varanasi raise more questions than answers.

One set of photographs show masses of people (anything between 30,000 to three lakhs) on the bridge, white flags in hand, caught between the railings and rows of SUVs and buses, some crawling along the iron guardrails to escape the crowd crush. Another set of images show piles of footwear and torn clothing on the ground.

What happened in between? There was the stampede, the third pilgrim stampede this year that snuffed out 24 lives, injured 50. Over 12 women and children could not be traced.

Why is it that we are always fed with lies on stampedes?

An investigation has started, police officials have been suspended, and compensations have been announced. And the dead have, as always, been blamed: for believing in false rumours, for panicking and running berserk, and for doing all those things that lead to disastrous outcomes.

We are told that the stampede was, apparently, triggered by a rumour that the bridge was caving in. People "ran berserk," fell, got trampled and died of injuries. The autopsy reports, however, indicate asphyxia, or suffocation.

Rumour and running amok have been the official explanation for almost every stampede in India. But the truth is, in a stampede, people don't run berserk. Surrounded on all sides by the pressure of hundreds of other bodies, it is physically not possible to run or even to walk. 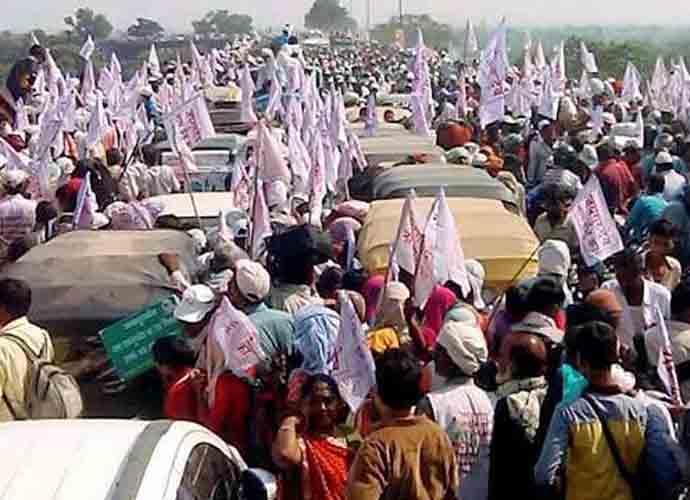 What happened on October 15 on Malaviya Bridge? (Photo credit: PTI)

A stampede occurs when the density of a crowd is more than five to six people per square meter of space. People get jammed together, shoulder-to-shoulder, front-to-back, arms pinned to the sides, caged between chests and backs, being carried forward with the pack or standing motionless with it.

But more than six people per square meter of space can create tremendous pressure on each - engineers say, it would be about 1,000 pounds of force or more. That is, pressure enough to create cracks on brickwork or bend metal. It's also the bite strength of a tiger.

During a stampede, that sort of pressure on the chest cavity can break ribs, making it impossible to breath. Within five minutes, one could die of asphyxia.

And because one is standing, the blood doesn't reach the brain. So, one often dies of a heart attack, too. People can fall and get trampled and die of injuries to the head or chest, but most commonly, one dies standing, literally chocked to death.

I have been on that bridge several times. Except for a few pedestrians enjoying the scenery or taking photographs, I don't recall too many people up on that bridge.

Clearly, it's not a common thoroughfare. So how did 30,000 (or was it three lakh?) people suddenly decide to take out a procession down that bridge? Whose bright idea was it? Who gave the permission? Why weren't they stopped?

Second, that bridge is ancient. Built on 15 pillars across the Ganga in 1887 (under Rudyard Kipling's father) the double-decker bridge was an engineering feat once upon a time. Not anymore. It has completed its "life cycle" in 1997, a civil engineering term meaning vulnerability.

Letters have been going back and forth for some years now, seeking urgent attention and repair. With trains thundering down its one kilometre stretch on the lower deck and constant plying of motor cycles, tempos, cars, buses and heavy vehicles above, it's a ticking time-bomb. Yes, trucks have been banned on the upper deck in 2014, but private buses still ply.

Yet the Indian Railways thinks all is well: the bridge is in perfect condition, as it said in August, when another appeal went up for its repair. Oh, yes, train speed has been brought down drastically on it.

The victims were clearly aware of the dire state of the bridge. The rumour of the bridge caving in had triggered the stampede, according to UP Police. It's not just the stampede, so long that ancient bridge continues to be neglected, the possibility of massive accidents is too real to be dismissed.

Who is at fault?

Five police officials have been suspended for "gross negligence" in crowd management and the "inability to anticipate". A typical knee-jerk reaction that India is well used to.

Meantime, one name has started doing the rounds: Pankaj Maharaj, or Pankaj Yadav, the man who inherited the mantle of the principal guru of the Jai Gurudev cult, after the founder Baba Jai Gurudev died in 2012.

The late baba, a politically influential figure, had amassed huge wealth and reportedly left behind a spiritual empire worth Rs 12,000 crore - that include massive properties, petrol and diesel filling stations. Pankaj Maharaj is believed to be close to the ruling Samajwadi Party.

On October 15, the man behind the massive congregation and leading the procession on the Malaviya Bridge was none other than Pankaj Maharaj. Shouldn't the guru share some responsibility along with the suspended officers?

Need to know the truth

Stampedes are rising, globally. Affordable high-speed transport has made it easier for large crowds to assemble.

Over the past 30 years, stampedes have killed at least 7,000 people and injured another 14,000, report researchers at Johns Hopkins Medicine, US.

Across the world, religious stampedes take the most lives. Data is scanty for India, but in the last 16 years, over 2,000 lives have been lost in at least 21 lethal stampedes around religious places. The number of people injured is likely to be double.

Indians die like flies in and around pilgrim spots. Yet, year after year, we cross dangerous terrains, trudge hundreds of miles, bear hunger, thirst, sickness and injuries, drawn to the promise of salvation, like moth to flame. For many, it becomes the last journey.

We are still left with the impression that a stampede starts when rumours spread and people start running pell-mell, and that the police were negligent. Nor are primers on crowd psychology, how to avoid stampedes or how to save yourself ever handed out to the public

Many more stampedes wait for us, if we continue to put our heads in the sand.

Varanasi is Prime Minister Narendra Modi's constituency. Dare we say we hope for some answers from him?

Also read - Does Modi even know how to make Banaras a smart city?

#Stampede, #Narendra Modi, #Banaras, #Varanasi
The views and opinions expressed in this article are those of the authors and do not necessarily reflect the official policy or position of DailyO.in or the India Today Group. The writers are solely responsible for any claims arising out of the contents of this article.