The Lalgarh story: From siege to succour

Even Mamata Banerjee's harshest critics agree she has taken Junglemahal out of the woods.

There was no grey left.

By the time the harsh and muggy summer of 2009 set in, the siege of Lalgarh and surrounding areas of West Bengal was complete.

The well-entrenched Maoist guerillas, spurred by the local community, had become brazen. Their existence, even if under the cover of the People’s Committee Against Police Atrocities (PCAPA), was becoming a national embarrassment and evicting them, a national cause.

On the "request" of the state government, an unprecedented deployment of central armed police forces along with those from the state followed. 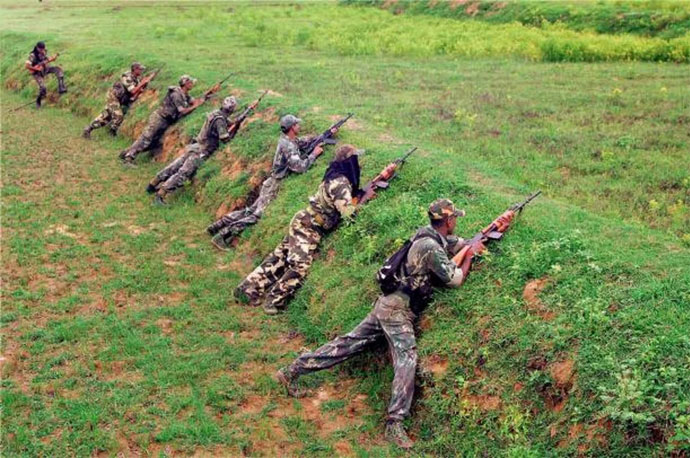 A file picture of joint forces in action action Maoists in West Bengal.

Reporting deaths, displacement, dialogue and development (lack of) became a daily occurrence. The geographical entity called Junglemahal in West Midnapore district would never be the same. The clock kept ticking.

In 2011, the Left Front’s three-decade-old rule in West Bengal ended. Mamata Banerjee’s Trinamool Congress (TMC) emerged victorious. Because Mamata was accused, quite often, of being hand in glove with the Maoists, people wondered what lay in store for Junglemahal.

The answer emerged before 2011 ended. "Kishenji", a dreaded insurgent leader had been gunned down.

The Maoists would never recover from his death.

A side story - Kishenji alias Mallojula Koteswara Rao was one of the founders of the Maoist insurgency. A native of Karimnagar in present day Telangana, he had devised a unique way to speak to journalists. To prevent security forces from identifying him, he stood with his back facing the camera and delivered his sermons!

On polling day, Junglemahal was unusually quiet. A guest house employee told me he had never experienced such an election for as long as he could remember. Rendered jobless by the effective election machinery, I decided to revisit Junglemahal’s past. Local journalist Deven Tiwari, an able guide, accompanied me.

Lalgarh was our first stop. Outside the police station, we met TMC workers who earlier were aides of the convicted PCAPA boss, Chatradhar Mahato, currently serving a life sentence. One of them, Saikat Jena said, "The TMC has looked after the young, the old and the women of Junglemahal. We have nothing to do with Maoists anymore." Later, we landed up at Mahato’s residence to meet his soft-spoken younger brother Anil who bore a striking resemblance to his brother. He had not voted. "The resentment my brother spoke about exists even today but nobody is speaking up."

Ramgarh was our next stop.

As we reached, Tiwari told me, "At the height of that agitation, policemen locked the police station here, handed over the keys to the Maoists and left. Later the place was set ablaze."

Inside the same police station, I met an inspector who briefed me about the police’s functioning and how the youth had been co-opted by them. He then laughed, "Today, neither you nor I have any work."

Located at a driving distance of 30 minutes from Ramgarh was Silda. We reached there crossing new bridges and largely traversing well-laid out roads. Back in 2010, the village hosted a camp of the Eastern Frontier Rifles (EFR), an auxiliary police unit. The Maoists found the camp to be poorly defended and in a single swoop in February 2010, killed 24 EFR men and devastated the camp.

Standing at the bloodied site, I tried to soak in the "normalcy".A slew of government clinics had mushroomed there. The past had been erased, almost.

Even Mamata’s harshest critics agree she has taken Junglemahal out of the woods. Be it in education, health, employment, recreational activities, the region has seen effective affirmative action.

Ministry of home affairs (MHA) data of July 2015 shows West Bengal has increasingly relied less on central support (especially with the MHA shutting off key schemes). Not one incident of Maoist violence has been recorded since 2014.

Perhaps the biggest endorsement of Junglemahal’s break from the past came from the young Dritiprasad Mahato, Chatradhar Mahato’s son. A first division football player in Kolkata, he said, "I don’t want to talk politics. There still are colleges without students, hospitals without doctors. Yet some changes have happened."

I asked him if he voted.

His expressive eyes and inked finger answered my question.

#TMC, #Mamata Banerjee, #Maoists, #West Bengal polls
The views and opinions expressed in this article are those of the authors and do not necessarily reflect the official policy or position of DailyO.in or the India Today Group. The writers are solely responsible for any claims arising out of the contents of this article.