BJP has no chance of winning West Bengal elections

Mamata is too strong a contender to be fazed.

There is no Modi wave in this election season in West Bengal. In 2014 Lok Sabha elections, this wave swept across the banks of Damodar and Mahananda river and the Bharatiya Janata Party (BJP) got 16.6 per cent of the total votes polled, its highest ever in the state.

It got the same number of MPs that of Communist Party of India (Marxist) or CPM, a party which ruled Bengal for 34 years. There was a lot of hope at 11 Ashoka Road (BJP's head office) in Delhi where political experts started predicting a triangle fight between the Trinamool Congress, Left front and BJP in the 2016 Assembly elections.

Then came the major shock in the April 2015 municipal elections in West Bengal, which was considered as semi-final prior to this Assembly election. Trinamool won big time in these civic polls by winning 70 out of 91 municipal bodies and the BJP failed to register even a single win.

Even in its strongest base in the state, Kolkata city, it could only win seven out of 144 wards. Although, the BJP lost almost everywhere, it gained some ground in the 2014 General Elections which left many observers guessing. Party bigwigs like BJP chief Amit Shah and several other cabinet ministers regularly visited the state post Lok Sabha but as The Telegraph noted that the BJP's "failure to build an organisation in the state" left them with no hope.

In the post 2014 phase, the BJP opened its seat in the West Bengal Assembly by winning the by-poll at Basirhat South constituency. To become a significant player in the West Bengal politics, it needs to win at least one-tenth of the total Assembly strength which is 292. But till now, no exit poll shows that the BJP will get more than ten seats in 2016 Assembly elections.

Whereas in the Assam elections, the BJP banking on the illegal immigration issue, in West Bengal it seems they have realised it won't garner them any votes. In the 2014 election campaign, Modi said in a rally at Bankura that "those who are Bangladeshi infiltrators, will have to go back" and "those who are thrown out of Bangladesh, those who observe Durga Ashtami and speak Bengali, they are all our Mother India's children". Modi's rhetoric worked for sometime to bring this less discussed issue in the state's political arena as I have discussed in this previous story.

The BJP tried to raise this issue again after the Burdwan blast by linking transborder crime with illegal immigration. It wanted to corner West Bengal government by sending NSA Ajit Doval at that time, but the West Bengal Police was rewarded later by the NIA for nabbing the main culprit in the case and this matter lost political currency for the day. So when Modi came to campaign in West Bengal this month, the issue of illegal immigration is nowhere in his speeches.

The Rashtriya Swayamsevak Sangh or RSS, the BJP's ideological mentor also seems to have lost their pull in these elections evident from excitement in the CPM-Congress camp. It constantly raised the issues of illegal immigration, Aligarh Muslim University centre at Murshidabad, state allowance for imams and muezzins and other minority community oriented policies by West Bengal CM Mamata Banerjee in the last few years.

And all those factors along with the Modi wave helped not only the BJP to expand its bases in West Bengal in the run-up to 2014 elections, but also the RSS which boasts of more than 1,000 shakhas in the state today. Sensing its bigger role, the RSS convinced the BJP to replace its state unit chief Rahul Sinha in 2015 with Dilip Ghosh, an RSS pracharak for the last three decades. The RSS was particularly worried about lot of Muslims joining the BJP as part of Sinha's new membership drive in the post 2014 scenario where he argued that to dislodge Mamata, the BJP should accommodate more minorities in its fold who are one-third of West Bengal's electorate. 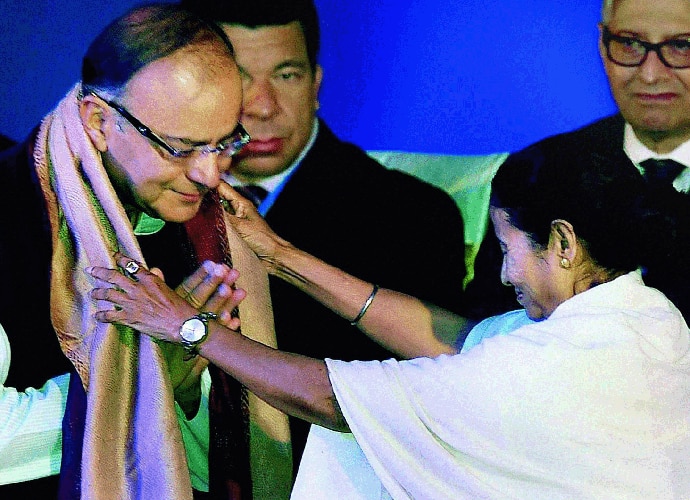 Anindya Paul, a primary school teacher from Siliguri who regularly commutes from his village in Uttar Dinajpur district has been witnessing RSS' rise in the area in the last three years. "Earlier people used to cover their faces if they attended shakhas due to fear of being branded as communal, but after the BJP's win at the Centre in 2014 they have stopped hiding," he says.

But in the light of the new coalition formed by old arch rivals the CPM and Congress, even Paul thinks that "the RSS' initial wins won't convert into votes for the BJP in the upcoming Assembly elections". In the light of new political developments, the BJP can't be seen as a strong candidate to challenge Mamata.

Also read - Saradha or Narada, nothing can sting Mamata in West Bengal polls

With the Saradha and then Narada scam, followed with the recent Vivekananda flyover collapse in Kolkata, there has been uproar against Mamata Banerjee. Even then, the BJP has failed to prove itself as a leading opposition voice in West Bengal.

The CPM continues to attack Mamata by tagging it with the BJP on many issues. The CPM Politburo member Mohammad Salim recently blamed the saffron party for being hand in glove with West Bengal CM by not ordering a central inquiry into the flyover collapse issue, because it was substantially funded by Centre under the JNNURM scheme.

On April 5, at the Kolkata Journalist Club's Meet the Press programme, Salim took a swipe at Union finance minister Arun Jaitley's press meet the previous day, "The BJP just wants to create a wave by holding press conferences. The Centre could legally order an inquiry but it did not. This shows the extent of Modibhai-Didibhai link".

Also read - The Lalgarh story: From siege to succour

Such constant posturing in the public eye by the CPM leaders have helped them gain back the trust of their erstwhile members, who left the party en masse after its dismal performance in the 2014 elections.

At a recent election rally on April 7 by Salim in Birbhum district's Labhpur, 400 BJP workers joined the CPM under the leadership of Surajit Pal, the BJP Yuva Morcha head in Nanur. He said,"There is no chance of the BJP winning the state elections this time. So to stand by the local people and develop our area, we have changed our party".

#Mamata Banerjee, #TMC, #BJP, #West Bengal polls
The views and opinions expressed in this article are those of the authors and do not necessarily reflect the official policy or position of DailyO.in or the India Today Group. The writers are solely responsible for any claims arising out of the contents of this article.

The writer is DPhil researcher at University of Oxford, founder and editor-in-chief of Khurpi.