The Muslim voter is expected to play a key role in determining who wins the West Bengal Assembly elections. The state accounts for the second highest population of Muslims in India (2.47 crore) and third highest, in terms of proportion of the population (27 per cent).

The Muslim vote could determine winners in 102 constituencies (35 per cent of Assembly strength). The Left-Congress alliance has made the elections, which would have otherwise been a walk over for chief minister Mamata Banerjee an interestingly close affair.

The Muslim vote is all the more important this time around because of the saffron surge in the state witnessed in the Lok Sabha polls in 2014 in which the BJP recorded twice the vote share of the Congress (17 per cent versus nine per cent) and got as many seats as the Left Front (two).

The Muslims were the traditional voter base of the Left since the late 1970s. They switched over to the Trinamool Congress (TMC) in the backdrop of the Sachar Committee's revelation of their dismal condition in the state released in late 2006. The Sachar Committee named West Bengal as one of the worst states for Muslims to live in.

Whoever the community supported in the past went on to win the elections.

2. The TMC-Congress alliance had 58 per cent of the Muslims supporting it in the Lok Sabha elections in 2009 and won 26 out of the 42 seats.

3. In the 2011 Assembly elections, the TMC-Congress alliance got 50 per cent of the Muslim votes and managed to uproot the Left, winning 227 of the 294 seats.

4. In the 2014 Lok Sabha elections, the TMC and Congress contested separately. The TMC still emerged as the favourite of the community and bagged 34 of the 42 seats.

*In 2009 and 2011 TMC-Congress were allies, separate vote shares not available. (VS: Vidhan Sabha LS: Lok Sabha)

In the last four elections, the TMC has won/was leading in 39 per cent of the seats which had a perceptible Muslim influence, Left in 31 per cent, Congress in 27 per cent, "Others" in three per cent and BJP in one per cent. In the 2014 Lok Sabha polls, the TMC was leading in 54, Left in 19, Congress in 26 and BJP in three of these 102 seats. If the Congress and Left would have contested together in the Lok Sabha polls, the alliance would have been leading in 63 (+18) of these 102 seats. 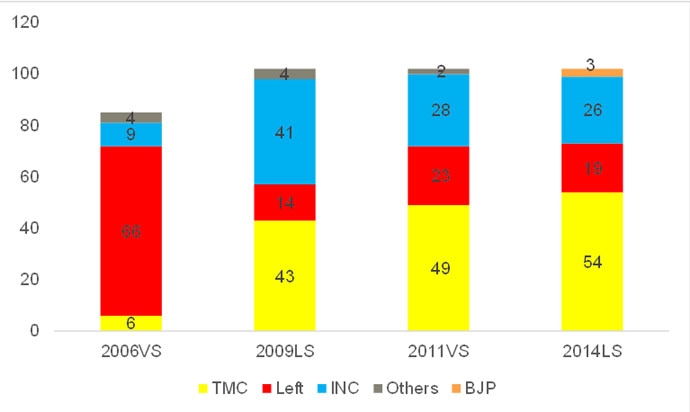 Considering the Left and Congress as a single party, the TMC would lead in 179 out of the 294 constituencies. In constituencies where the proportion of Muslims is greater than 40 per cent, the TMC's lead over the Left-Congress has been a massive 16 per cent.

On the other hand, where the proportion of Muslims is almost negligible (in 36 constituencies), the TMC's lead comes down to 12 per cent. Here the competition will be to win Hindu votes from the BJP.

The second segment where the competition between the TMC and Left-Congress is a little closer is where the proportion of Muslims is between 25 to 40 per cent (in 35 seats). Here the vote share gap is only ten per cent. Here, the Left will have to win votes both from the TMC and BJP to cover its gap. Therefore, winning both past BJP voters and Muslim voters from the TMC at the same time will be a huge task for the Left and Congress.

Therefore, the 2016 Assembly election poses a tricky question for the Muslims of West Bengal: Should they continue to vote for the TMC or go back to their old saviours, the Left and Congress?

The Mamata government has taken a lot of measures for the welfare of Muslims with allowance/stipends for imams, free cycles to girls studying in madrasas, scholarships to Muslims students (class one to ten), reservation for Muslim OBCs (Left had initiated it), ban on the telecast of a drama series by controversial author Taslima Nasrin and making Urdu the second official language in districts where Muslim population is more than ten per cent. Mamata made a strong anti-Modi pitch in the 2014 Lok Sabha elections and secured maximum votes from the Muslims. Mamata has aggressively wooed the Muslims over the last 12-24 months.

A report by Social Network for Assistance to People (SNAP) and Guidance Guild titled "Status of the Muslims in Bengal - 2014" suggests that their plight has not improved under Mamata - 80 per cent of the rural Muslim households still live on Rs 5,000 a month, only one per cent of public sector jobs are with the Muslims and 15 per cent of their children (6-14 years) don't have access to education.

Muslims have voted not just on governance, but also on security. In that context, with the firming up of the Left-Congress alliance, it is seen as more capable of taking on Narendra Modi nationally than Mamata. The Congress bagged 24 per cent vote share in the 2014 Lok Sabha polls, same as its 2006 Assembly polls number, despite no alliance with the TMC. This is testimony of its strength amongst the community. However, support for the Congress is concentrated in and around Malda and Murshidabad districts.

The relatively soft handling of the Saradha chit fund scam by the BJP, given that the Modi government needs the TMC's support in the Rajya Sabha, may appear to many voters as a secret understanding between the two parties. Mamata has been part of the National Democratic Alliance (NDA) earlier and this would be played up by the Left and Congress in the campaign.

Mamata recognises this and has actively tried to impress the community. At one level, she has shared stage with so-called "community" leaders, some of whom having the spottiest of records. On the other hand, she has increased the tickets given to the Muslims by almost 50 per cent from 38 to 57.

Looking at all the above, and the fact that none of the polls have suggested a Left win, it is unlikely that many Muslim voters who voted for the TMC in 2014 will shift towards the Left-Congress alliance at the last minute. Small gains whether from the TMC or "Others" are unlikely to deliver the 2016 election in favour of the Left-Congress.

It might just be possible that Muslims will become the "man of the match" for Mamata in 2016. As a savvy politician, she figured the importance of Muslims much before any other politician in West Bengal and aggressively wooed the community over the last 12-24 months. Morality and risks of the strategy aside, the electoral wisdom behind it is unquestionable.

#Muslims, #TMC, #Mamata Banerjee, #West Bengal polls
The views and opinions expressed in this article are those of the authors and do not necessarily reflect the official policy or position of DailyO.in or the India Today Group. The writers are solely responsible for any claims arising out of the contents of this article.