What our politicians should learn from MS Dhoni

Our leaders should take a cue from Captain Cool in having the sense to know when to hand over the baton of leadership to the next generation.

There has been a gradual transformation in Indian cricket over the last 20 years. One that changed a mediocre side under Mohammad Azharuddin, to a self-believing team under Sourav Ganguly, to world champions under Mahendra Singh Dhoni. It is up to Virat Kohli now, to take the team to even greater heights.

Having the right sense to know when you should hand over the baton of leadership to the next generation is a virtue most people don't have. Everyone knows about Dhoni’s calculated surge at the tail end of thrilling limited-overs matches. He showed the same calculated approach in passing the duty of captaincy to his successor too.

Dhoni first handed the captaincy to Kohli in Test matches when he had to miss a match in Australia in 2014 due to injury. India, set a target in excess of 360, decided to push for the win and Kohli led it from the front. Although the team lost the match by less than 50 runs, Kohli’s approach garnered praise from fans worldwide.

Before the last Test of that series, Dhoni announced his retirement and Kohli was made the captain. While some people criticised the move as it came in the middle of a series, what Dhoni did was only helping Kohli. He got another rare opportunity to lead the side against Australia in alien conditions — an opportunity, as priceless as it sounds. 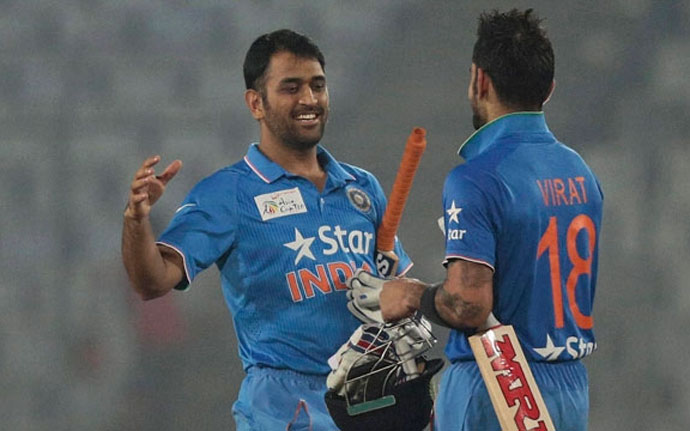 Dhoni showed calculated approach in passing the duty of captaincy to his successor. (Ph oto: PTI)

After two years from then, Dhoni has decided to hand over the limited-overs charge also to Kohli, who he knows holds a definite psychological upper hand over the England side whom his side thrashed 4-0 in the recently concluded Test series. Another calculated decision that will not dent the confidence of the new captain or the team.

Juxtapose that with politics. We just saw how J Jayalalithaa left the stage without revealing any succession plan whatsoever for the AIADMK. The once formidable party is in total mishmash now. She — literally and practically — left a void in the AIADMK politics in the state.

Samajwadi Party is another example. The party is in disarray as the patriarch Mulayam Singh Yadav is unwilling to pass the power to son Akhilesh Yadav, who has the backing of nearly 90 per cent of its elected members. Mulayam, who has played more politics than most leaders in the country, is still unwilling to let go of his ego and control over the party. Clearly, the lack of a succession plan can cause the party dearly in the forthcoming elections.

This is applicable for most family-owned, single-state parties in the country.

Unfortunately, Congress is not to be left behind. They do have a successor for Sonia Gandhi in Rahul Gandhi, but one that is tried and tested several times as vice captain, without much success. The team is failing. Sonia Gandhi is not much active in politics. The party must either promote Rahul to captaincy and let him face the challenge head on, or find someone else and give them a fair run.

Knowing the party tradition, the second option is almost entirely out of the way as the highest position people outside the Nehru family can grow to, is any position under the undisputed captain. Sad, but that's the truth.

Will our political leaders take their cue from Dhoni and do retrospection? Well, if only they did!

#Rahul Gandhi, #Virat Kohli, #Samajwadi Party, #MS Dhoni
The views and opinions expressed in this article are those of the authors and do not necessarily reflect the official policy or position of DailyO.in or the India Today Group. The writers are solely responsible for any claims arising out of the contents of this article.