Why should Hamid Ansari prove his patriotism?

The vice president followed the correct protocol by not saluting the national flag.

It seems that no matter how many times a Muslim swears his allegiance to the Indian nation, no matter how successful he becomes in the country, there will always be doubts over his patriotism. Even if you are the vice-president of India, if you are a Muslim, you still have to prove your love for the country.

This morning when most Indians were watching the Republic Day parade with pride, some self-proclaimed defenders of the nation decided to use their off-day criticising vice president Hamid Ansari. Pictures were posted on Twitter and Facebook showing that Ansari did not salute the national flag during the national anthem. "Jihadi sympathiser", "anti-India", "traitor", these were some of the names that the vice president of India was hurled at on the country's 66th Republic Day. Many tweeted demanding that Ansari be impeached, the more moderate ones wanted him to resign, the more outraged ones advised him to join the ISIS. 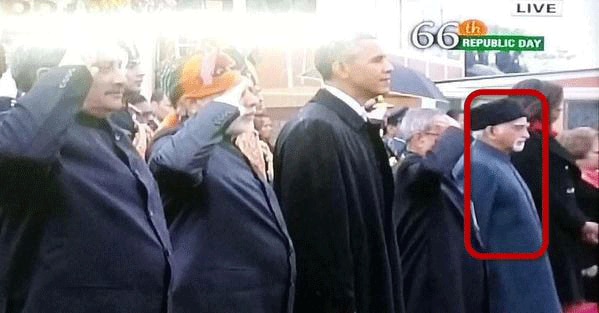 The picture that is being circulated on social media accusing the vice president of "disrespecting" the national flag.

Now, the more immediate question here is what is the protocol? According to Section VI of the Flag Code of India, which deals with the protocols for saluting the flag, "During the ceremony of hoisting or lowering the flag, or when the flag is passing in a parade or in a review, all persons present should face the Flag and stand at attention. Those present in uniform should render the appropriate salute". Prime Minister Narendra Modi, President Pranab Mukherjee, vice president Ansari, US President Barack Obama, defence minister Manohar Parrikar were not in uniform and were therefore not required to salute the flag. President Mukherjee, Modi and Parrikar actually made a mistake by saluting the flag, Ansari did the right thing.

But who cares about protocol when you are performing the great duty of defending the nation? If Ansari didn't salute the flag, it has to be because he is following some subversive anti-national injunction in the Sharia. Of course home minister Rajnath Singh and external affairs minister Sushma Swaraj also didn't salute the flag, but then being non-Muslims, their patriotism is beyond question.

Not just Ansari, other prominent Muslims have been subjected to similar attacks. So when Aamir Khan as PK, criticised Hindu godmen, questions were raised whether the film had Pakistani funding. When Paresh Rawal did the same in OMG! Oh My God, he was upholding the cause of rationality and scientific temper. Sania Mirza might have won 14 medals and 24 WTA titles for India, but she is called a Pakistani by leaders from a mainstream political party like the BJP.

It isn't just the lunatic right wing that subscribes to such views. The belief Muslims just aren't good Indians exists in the subconscious of many, even well-meaning people. Bollywood filmmakers are a good example. For instance, take the recently released Baby, starring Akshay Kumar. In the film, a terrorist tells the hero that in the religion column of government forms, he writes "MUSLIM" in bold and capital letters. Kumar responds by saying that he writes "INDIAN", in bold and capital letters. So just as the pack of internet Hindus want the vice president of India to deviate from protocol to prove his patriotism, the film is giving Indian Muslims a crash course in patriotism which involves providing wrong information in government forms. It seems we are going back to the days when people were asked whether they are Muslims first, or Indians first.

If Indian Muslims have to become chest-thumping caricatures in order to be seen as Indian enough, is there something wrong with these 17 crore people or does the flaw lie in the understanding of patriotism that is widely gaining currency?

#Patriotism, #Muslims, #Hamid Ansari, #Republic Day
The views and opinions expressed in this article are those of the authors and do not necessarily reflect the official policy or position of DailyO.in or the India Today Group. The writers are solely responsible for any claims arising out of the contents of this article.

The writer is a political journalist based in Delhi.