Into the wild, a map every Indian must see

The world of conservation is grim. Very grim, and wildlife news reads not unlike bulletins from hell.

My morning cup of coffee when I catch up with conservation news usually goes like this: "leopard beaten to death"; "cops seize ivory of 40 tuskers", "over two tons of pangolin seized" (pangolin is the world's most "trafficked" animal), "Ken-Betwa river link to submerge Panna tiger"…and so on. And so forth.

Sad, especially so, when you consider how beautiful and peaceable the natural world is. 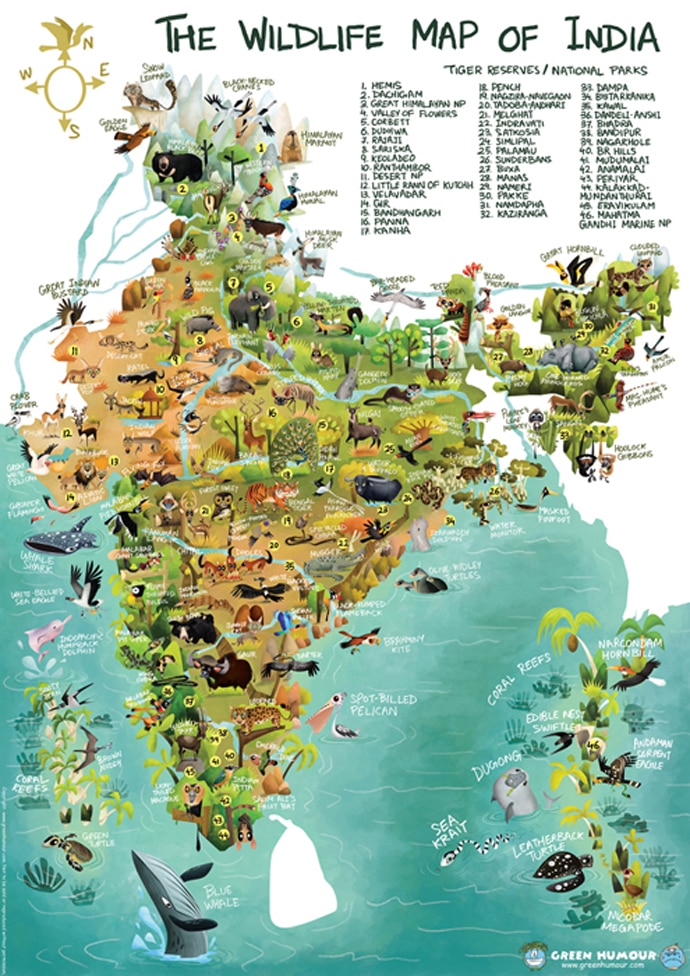 In this bleak milieu, comes the good doctor who lived in a pretty deep, dark world himself - comprising mainly of trapping people in metal chairs and peering down their throats as they yelped in agony. That was Dr Rohan Chakravorty, doing what he was compelled to do - dentistry - as much as his patients were constrained to occupy that chair.

Rohan was born in Nagpur, where "good" boys studied engineering or medicine. It spelt security, a steady income, settling down. Which was all very fine, but this doctor-business left little room for what his real teachers - Natwarprakash and Champak - had taught him. The former instilled in him that very rare trait, in exceptional shortage in India: a sense of humour. The latter was a naturalist par excellence and bird-watcher. A great bird spotter, he helped inculcate the love for the outdoors in the budding young naturalist. He helped Rohan spot a flock of Asian Openbills, and also the increasingly rare sparrows. But Champak lacked patience. No sooner had he seen the birds than he chased them. Huh?

Well, Rohan's teachers were Canis lupus familiaris, known to you and me as dogs.

They had also taught him to be sneaky (like creeping up Rohan's bed, as soon as the lights dimmed, and the parents were asleep); so Rohan pored and slogged (really) over stodgy medical books during the day, and moonlighted at night, with another kind of medicine: humour.

He drew, he doodled, and expressed in his caricatures his fascination for animals, his concern for wildlife, the issues that threatened the natural world. His creations soon got a web address greenhumour.com -  a collection of Rohan's cartoons, comics and illustrations on wild animals; wildlife and nature conservation, environment and all things green. There is a lot I can say about it, but I suggest you look up the site instead.

What I will say is that Rohan has given us the wonderful medicine of laughter, in the most dismal of situations.

The message goes beyond the conventional audience already interested in wildlife; humour reaches out, even to those disconnected with the cause. While one might ignore a lengthy article, cartoons are a great way to create awareness and education about conservation - without thrusting it down your throat (Rohan has moved on from his previous life!). Says he, "Cartooning can be a truly fun way to understand wildlife."

A well-done cartoon takes a moment of your time, but gives you much food for thought. A sample of Rohan's work. Roads kill wildlife. They splinter wild habitats, isolate populations leading to their eventual extinctions. The ongoing expansion of National highway-7, which bulldozed every forest and wildlife authority in the country, and bent rules and laws, will spell doom for the Kanha-Pench corridor which it bisects. Tourism is such a wonderful thing, if it supports local communities and inspires conserving wildlife. But it's a double edged sword, as can be witnessed in many of the more famous tiger reserves like Corbett and Ranthambhore, where (largely) insensitive tourists crowd over and harass tigers, not unlike media converging over a Bollywood star, as news breaks over his having coughed, peed, crapped, whatever in the last hour. Dholes or Indian wild dogs are fascinating creatures - they are social animals living in strong packs, co-operate in hunting and bringing up cubs and communicate through whistles. Rohan communicates animal behaviour and ecology through his illustrations. 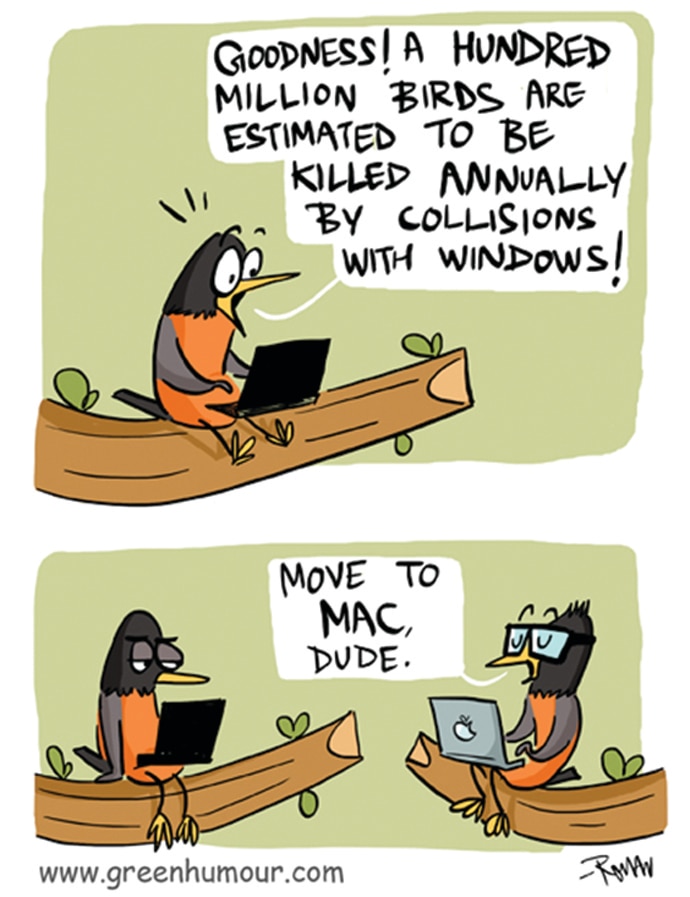 Threats are communicated in a zany way too. I don't need give a long-drawn explanation here. Very clean, gleaming glass windows fool the bird into thinking of it as an actual landscape, and it often crashes into them - especially when faced with a frenetic situation, like escaping predators. No, the lesson here is not that you can skip washing windows (I wish!), but to make them more visible, distinguishable. Block the reflections with stickers or plastic wrap, attach hanging objects in front of the windows - or anything innovative you can think of! 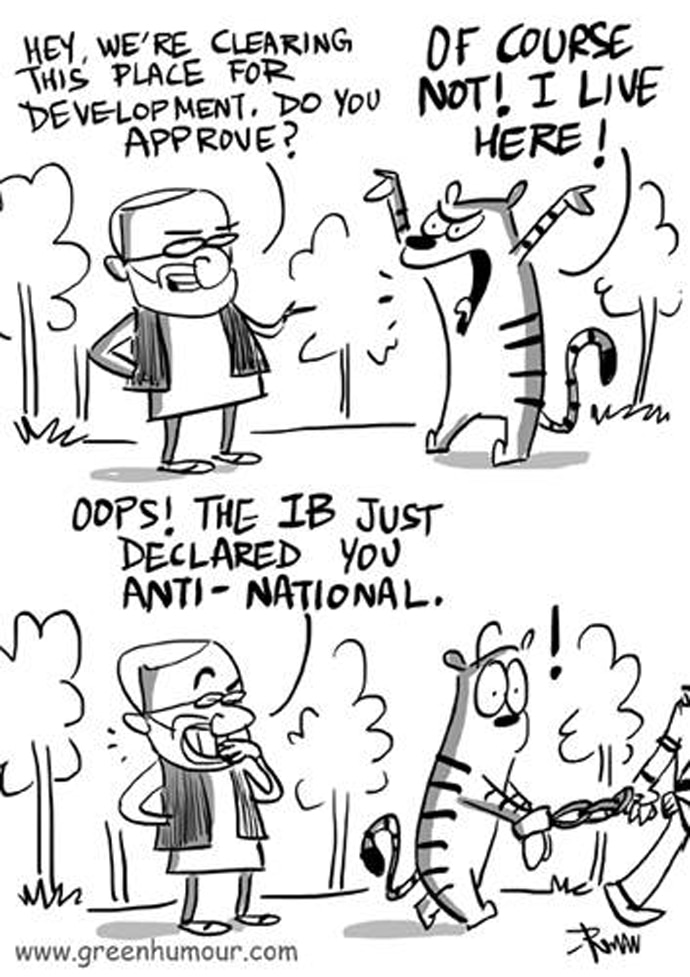 Though Rohan avoids the political, it creeps in occasionally. Wildlife cannot be viewed in isolation. Conservation issues are influenced, if not dictated by political conviction and decisions. Here Rohan makes a derisive comment on the rapid clearing away of prime tiger habitats for "development", and the tiger being "anti-national" for defending its forests.

Rohan's magnum opus, the hook on which this piece rests - the country's wildlife map. India, described and illustrated through its wildlife. A map that takes you through its lush forests, rivers, wetlands, mountains, deserts harbouring rare, endangered wildlife, depicted beautifully, and imaginatively, through caricatures.

India, as you may not know it. The India I love.

#Nature, #Wildlife
The views and opinions expressed in this article are those of the authors and do not necessarily reflect the official policy or position of DailyO.in or the India Today Group. The writers are solely responsible for any claims arising out of the contents of this article.