Why the secret to village empowerment lies with women

We must equip them with information and skills that can build their confidence to be leaders who catalyse development.

The district of Mewat, barely 70 kilometres from New Delhi, has one of India's lowest human development index scores. Overall literacy is low, few children are vaccinated, open defecation is prevalent, and family size is large. Women face the brunt of the district's poor development. Most girls marry by age 18, and the vast majority of births take place at home. Women and girls bear the burden of managing water and fuel shortages resulting from inadequate public services in their communities. In this district where agriculture is the main livelihood, women also perform much of the agricultural work in the fields but their work on the family farm is uncompensated. Since women's major contribution to the local economy is not recognised, they are financially dependent and vulnerable to domestic isolation and violence. These realities continue a vicious cycle of poverty.

Empowerment of women in such a district will not only lead to emergence of women leaders but will also accelerate development of the entire community. Research has shown that bringing women into leadership positions helps the larger community, given that women think about the impact of their decisions on their families and surroundings. Indian law recognises the importance of women's inclusion, offering a minimum of 33 percent of seats for women in panchayati raj institutions. The need of the hour is to equip rural women with information and skills that can build their confidence to be leaders who catalyse rural development. 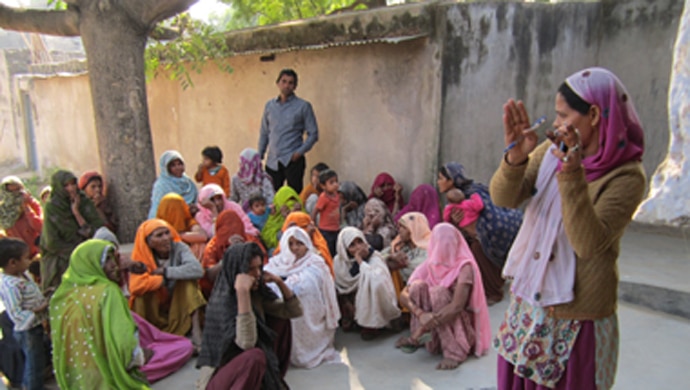 Empowering these rural women is critical to the mission of Sehgal Foundation, where a multifaceted approach is used to strengthen community-led development to achieve positive social, economic, and environmental change. Through our work in Mewat, we have seen first-hand that rural women possess tremendous potential as individuals, as leaders in their communities, and in society at large. Here are five key learnings on how to work with women to build their capacities to lead development in their communities.

Women are citizens too

Millions of rural women are unaware of their equal rights as Indian citizens, or of ways in which they can become involved in their village-level institutions. This means women are kept from participating in the essence of Indian democracy and decentralised governance. Structured, local means of engaging women to learn about their rights goes a long way in helping them become well-informed citizens who will eventually take on leadership roles to improve their lives and their communities. By knowing their rights, these women drive better delivery of public services and take problems with delays or denial of benefits and services directly to government line departments, resulting in improved transparency and accountability. Sushasan Abhi (Good Governance Now!) is a training programme that raises awareness and skills of community members in dealing with public service delivery. Villagers trained in Mewat in 2014 (of which 63 percent were women) went on to make exceptional changes in their villages. In Mundaka and Shakarpuri, women trainees uncovered irregular distribution of rations and siphoning of food grains by the depot holder. After negotiation with the depot holder failed, the women filed a complaint against him. An investigation by the assistant food supply officer found the depot holder guilty of corruption, and canceled his licence. Citizens from both villages nominated an educated local woman to manage the ration depot. Since she received her licence in January 2015, ration distribution in both villages has been proper and timely.

Rural women in village-level institutions, such as panchayats and school management committees, are often reluctant to voice their opinions in mixed gatherings. Patriarchal norms, lack of education, limited access to information, and restricted mobility discourage women from actively contributing to community development. All-women gatherings, such as mahila sangathans (women's collectives) provide a safe space for women to discuss problems and gain confidence before bringing them up in a larger forum. Here, women leaders are more able to raise fundamental - but oft-ignored - development issues that men often do not recognise, such as female literacy, alcoholism, access to clean water, and lack of toilets. 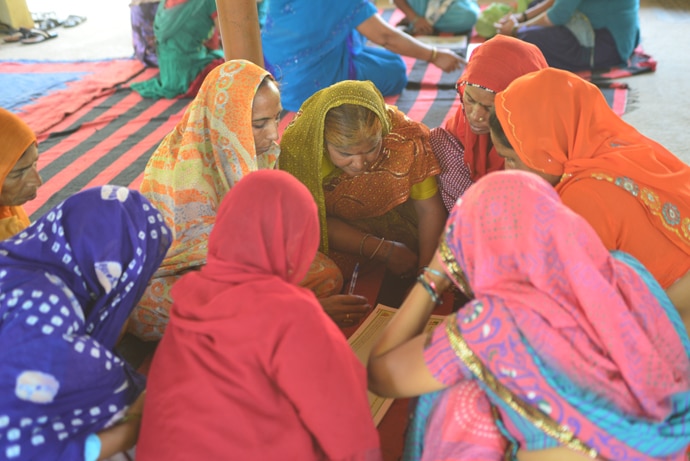 We have worked with mahila sangathans comprising elected women from across 100 villages in Mewat, and seen that these platforms encourage women to open up on more delicate issues understand how to raise these issues in gram sabhas and panchayat meetings, and demand solutions. And these Mewati women leaders have achieved results: they have collected community contributions to build a village water tank, mobilised construction of toilets under Swachh Bharat Abhiyaan, and even secured 12 hours of power for their village after collectively complaining at the electricity board office.

The Beijing Platform for Action, a global blueprint for advancing women's rights adopted by 189 UN members, recognised the importance of women's access to, and participation in, media, because information is critical to empowerment. However, in rural areas, where most women are semi-illiterate or illiterate, important messages in print publications, wall paintings, posters, and other traditional rural media fail in providing them crucial information. In communities where women and girls lack freedom to attend meetings, they have few ways to find answers to their questions, or speak with outsiders, especially males. New technologies overcome the bottlenecks, but they require a steady electricity supply, freedom of access, and some degree of literacy and training. 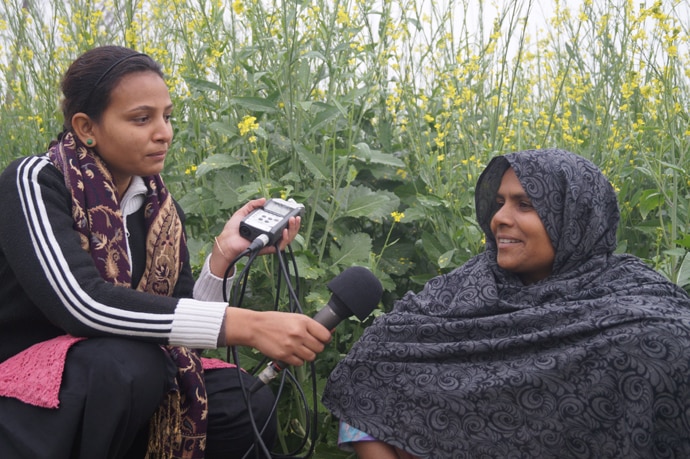 Radio Alfaz-e-Mewat reporter interviewing a farmer in her mustard field in village Ghaghas.

Community radio has proven an effective platform to inform, entertain, and engage rural women. Reaching most rural listeners in their homes, local radio offers a communication lifeline to isolated women. As of May 2015,183 community radio stations are in operation across India, spreading energy and hope at the grassroots. 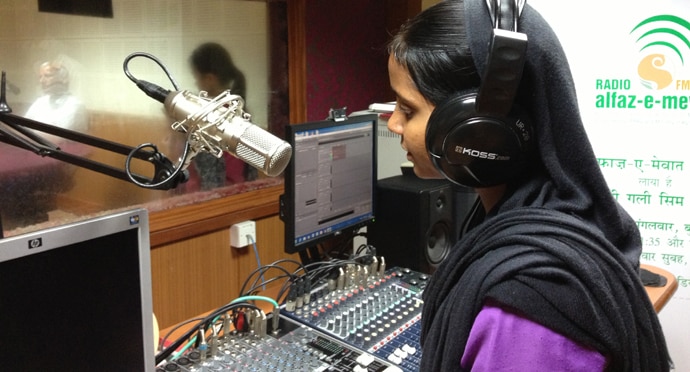 Community radio jockey Saroj at the studio of Alfaz-e-MewatFM 107.8.

In Mewat, Alfaz-e-Mewat FM 107.8, involves women as broadcasters and reporters, and encourages female listeners to ask questions about village issues and receive detailed information. Involving women in discussions of local issues motivates other women to speak up. Women now comprise 20 percent of callers to live call-in portions of programmes. Supplementing traditional radio programming such as local music and call-in requests, the foundation also has a telephone hotline that guides citizens to government departments and village level institutions to address their concerns. When the hotline was launched in Mewat in 2014, there were few women callers. Today, every tenth caller is a woman seeking solutions to a village development issue.

Education is critical, especially for adolescent girls, who begin to feel social pressures acutely, experience hormonal changes, and struggle with low self-esteem. Sustaining their education helps them gain confidence and make better choices about work, family, and community that will have lifelong impact.

With the limited exposure available to women and girls in rural areas, life skills development is even more important than academic education. Life skills education helps girls express themselves, participate as decision makers in their life choices, and take up action-oriented roles in community governance. At the life skills center in Bhajera village, Mewat girls are interactively trained on maternal and child health, government programs, and sewing. Such programs teach life skills through interactive training sessions that provide girls with the opportunity to share their experiences, develop a positive peer culture, and establish comradeship, which is often missing in their lives.

Life skills education is an important complement to their vocational skills training. As village women become skilled to work outside the home and farm, they need the ability to manage new aspects of safety, financial management, social skills, legal rights, as well as family health issues.

Recognising and featuring women in rural India who have crossed barriers to lead their community forward have served to motivate other women - and men - in the community to support female leadership. Honoring women role models is a simple and effective means for getting the word out that women can be a force of positive change that benefits women, men, and children.

Sehgal Foundation's work in Mewat over the last 15 years has demonstrated that society needs women's leadership and their essential involvement brings social and behavioral changes to rural communities. When women have the opportunities to reach their potential, and when they are economically and socially empowered, they can become a potent force for positive, lasting social change.

#Women entrepreneurs, #Mewat, #Rural development, #Women Empowerment
The views and opinions expressed in this article are those of the authors and do not necessarily reflect the official policy or position of DailyO.in or the India Today Group. The writers are solely responsible for any claims arising out of the contents of this article.