Why I'm afraid for young women in India

Our society is at the cusp of change but not fully there.

We are in a cusp. Wait till we turn the corner...

I was reading about a social media post which went viral. It was written by a distraught woman who had caught her Ola cab driver filming her by placing his phone in a strategic way.

Her gut told her something was not right. The driver's body language was defensive. He kept looking at her furtively through the rear view mirror.

And then she saw the phone and asked the driver to pull over.

Also read: Why the Indian woman is either a mother or a whore

She managed to confiscate his phone, after she made him show her the saved videos in it. Sure enough there she was, emailing, tidying her hair and doing whatever she was doing.

She filed a complaint and also informed the cab company about the unnerving incident. She says she felt violated. 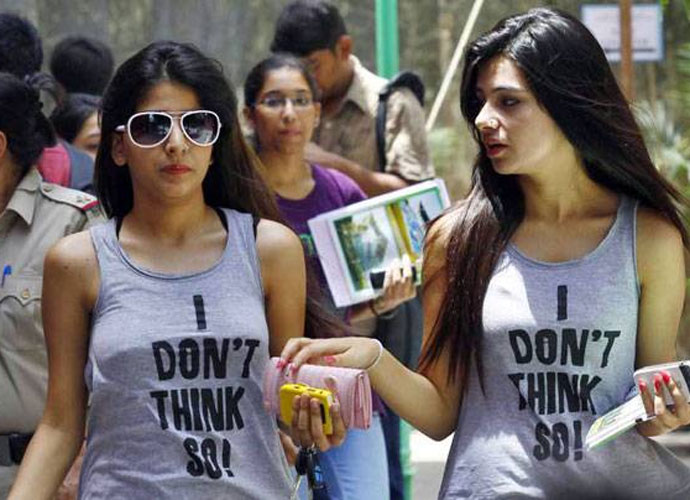 Wherever a villager looks in a city he sees skin. His maths is simple. A woman who shows skin is available and cannot possibly object to sexual overtures. So he makes them.

It's worse because this offence was not big and the driver would get bail, the police officer told her. He must be out free by now, probably filming someone else.

But what is going on? The 21st century has seen perhaps the largest trend of rural to urban migration.

Also read: How Kerala HC helped a college expel a student for falling in love

What this essentially means is that people from the villages are moving to the cities in search of work. The work can be unskilled labour or the sort of work a semi-trained person can do. Drivers, deliverymen, waiters, even guards, fall under this category.

Poor returns from agriculture and financial distress owing to erratic crops as a result of failure in monsoon, untimely rains, flash floods, drive the farmer out of his farms.

In the cities the manufacturing and construction boom easily absorbs the migrant population. The educated youth from the villages are absorbed by the urban services industry.

Sometimes the youth moves to urban areas seeking anonymity to be able to work - something they can't do in their villages. Then there is of course the uber rich, SUV-driving lot of rural youth who have suddenly come into money because they have sold their farm land to builders and industries.

This exodus to the cities is by men who leave behind their wives and sisters in the village.

Their women live behind the proverbial seven curtains and have no freedom of any sort. They don't show their faces, they certainly do not talk to men, they don't study, and they don't work outside home, unless it is in the fields.

This is of course a very broad picture and can have some generalisation - yet by and large this is how it is in the villages.

The villagers come to the cities and are blinded by what they see. Whether a daily wage earner has a roof over his head or not he will have a handset which will serve several functions.

Their cell phones deliver to them at a very low cost entertainment of the most ribald and sexual kind.

Their minds are buzzing with what they see in the cities. They see women of an entirely different nature.

To a villager's limited mind, the women he has left behind are the better women; they don't even show the skin of their wrist.

In the cities, wherever he looks he sees skin. His maths is simple. A woman who shows skin is available and cannot possibly object to sexual overtures. So he makes them. And the sort of mayhem we see nowadays happens.

I am an advocate for the freedom of women in all its possible manifestations, but, I do have this to say. I say it to all the young girls in my home and I am saying it here.

Till the time our nation crosses this cusp in the history of its growth, is it possible at all for us to be prudent? To be mindful about what we wear, where we go and how we behave?

We can make all the noise we like about what the government is doing or not doing for our safety. We can scream ourselves hoarse about our rights - our rights to wear what we like, go where we like and do as we like. Yes, we have those rights.

These rights are to be enjoyed and flaunted only if we live. And, this cusp in our history will pass, slowly but surely.

Post your comment
#Sexual harassment, #Women
The views and opinions expressed in this article are those of the authors and do not necessarily reflect the official policy or position of DailyO.in or the India Today Group. The writers are solely responsible for any claims arising out of the contents of this article.