The more immediate and ongoing tragedy is occurring in Chhattisgarh's Bastar district.

The yearly sarkari tokenism around International Women's Day reached a new low with Prime Minister Narendra Modi's proposal that this year "only women parliamentarians should speak in Parliament on March 8".

The stark emptiness of the proposal was provided by the context across the country, where attacks on women and the suppression of their voices have seen no let up and there have hardly been any real steps to remedy the situation. 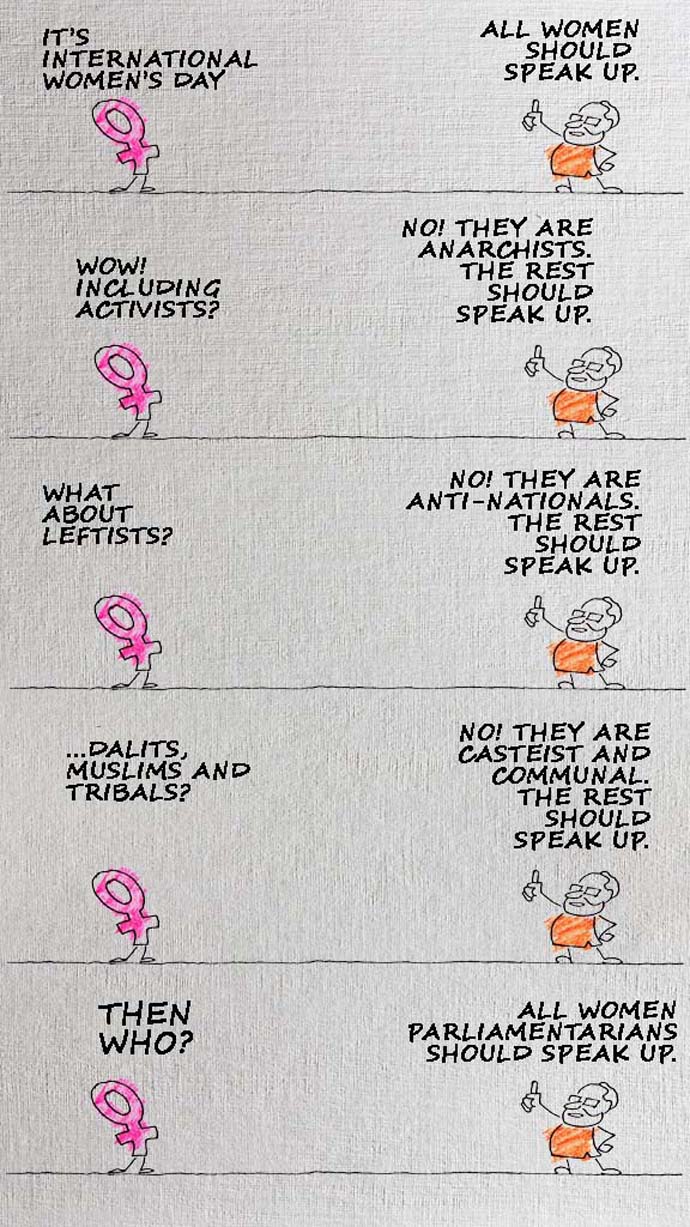 The harsh irony is most sharply evident in the conflict zones of the country, where it is the government's forces themselves which have been accused of the worst type of atrocities against women.

Around the time the prime minister was making his suggestion for Women's Day celebrations, the Kashmir Valley was resounding with protests marking 25 years of awaiting justice for the victims of the Kunan-Poshpora rapes of February 23, 1991. The case against Rajputana Rifles personnel lies pending before the Supreme Court. Manipur's 12-year-old Manorama rape and murder case against Assam Rifles personnel similarly remains pending before the courts.

The more immediate and ongoing tragedy is occurring, however, in Chhattisgarh's Bastar district. There, the paramilitary forces, police and state-sponsored vigilante gangs have over the last few months been on a continuous campaign of loot, sexual molestation and rape.

After a fact-finding visit to the area, Nandini Sundar, professor of Sociology at the Delhi University reports: "Between October 19-24, 2015, 40 women of Peddagelur, Budgicheru and Gundam villages were sexually assaulted, beaten, and stripped by the security forces; two women were gang raped. On January 12, six women from Kunna village in Sukma district were sexually assaulted and between January 11 and 14, 13 women were gangraped in Belam-Nendra village in Bijapur district. In all these cases, the rapes were accompanied by extreme physical and verbal abuse, and the looting of their homes." 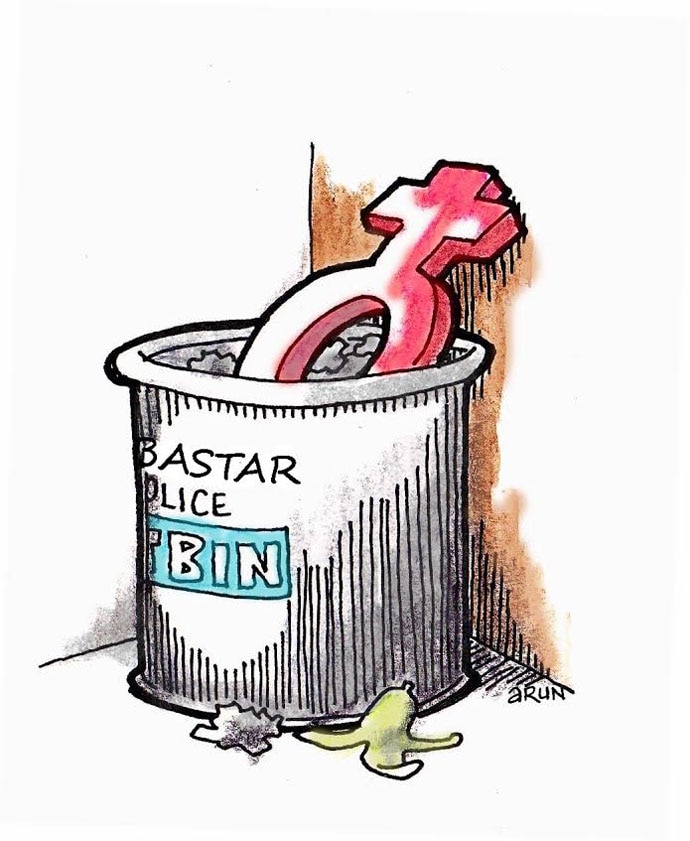 Violence on women and other human rights violations in Bastar by the security forces most often remain unrecorded and unnoticed by the outside world. This time, however, it was somewhat different.

Over the past three years, first with the moving in of three women lawyers of the Jagdalpur Legal Aid Group (JagLAG) in 2013 and later with the release and return of adivasi political prisoner and activist, Soni Sori in 2014, the villagers of Bastar have been better able to organise themselves to try and reclaim their legal rights and even to protest atrocities through mass mobilisation, often directed at forcing the police to register crimes in this regard.

In 2015, the noted scholar Bela Bhatia and Scroll.in journalist Malini Subramaniam also moved to Bastar. They, too, played a significant role in taking the stories of blatant law violations and repression and torture of the local population to the outside world.

A repressive police machinery is always allergic to the truth. Soni Sori's leadership through padayatras and demonstrations, JagLAG reports of false implication and incarcerations of hundreds of innocent tribals, Bela Bhatia's push for registration of FIRs against rapist cops and Malini Subramaniam's posts on forced surrenders and numerous other unlawful practices all posed a threat to the unquestioned criminal acts of the law machinery.

At first, indirect threats to fall in line and not oppose the police were given. When these did not have effect, the next step was to apply the brand of Naxal or Maoist on the local population and launch open campaigns against them. Bar Associations under BJP leadership passed resolutions against the lawyers as outsiders and tried to prevent them from practising in the courts.

Organisations propped up by the police with names like Samajik Ekta Manch, Nagrik Ekta Manch, Vikas Sangharsh Samiti, started demonstrating and issuing threats and even resorted to acts of violence like stone-throwing on Malini's house and car.

The next step was outright eviction. Landlords of the places where the JagLAG lawyers, and where Malini were staying were called to the police station and forced to serve notice on their tenants. They were thus forced to pack up and leave. Soni Sori was told that she did not have proper title to the house she was staying at.

When she did not back down, she was attacked and had some chemical substance applied to her face. With continuing threats to her life, she had to be taken outside Bastar for treatment.

The police under the leadership of Bastar region inspector general, SRP Kalluri, has announced Mission 2016 during which he promises to crush Naxalism in Bastar. This has seen a rapid rise in forced surrenders and false encounters, besides rapes and molestation of women.

Whole villages are being forced out with all young men being detained and tortured in police camps until they agree to fake surrenders. As pointed out earlier in these columns, the stage has already been set for aerial attacks, which could result in even thousands of deaths of Indian citizens.

As Mizoram this week commemorates the 50th anniversary of the bombing of Aizawl - the last time that the Indian Air Force (IAF) was used to attack the people within the country's borders - it seems that similar operations may form part of Kalluri's Mission 2016.

When Sri Lanka had launched a similar assault in Mullaitivu in the last phase of its war on the Tamil Tigers, it had been called a "war without witnesses". Sri Lanka had first ensured that all journalists, human rights activists and observers were thrown out of the area. The similarities in the recent evictions from Bastar carry grim portents.

Bastar's mothers and daughters in danger 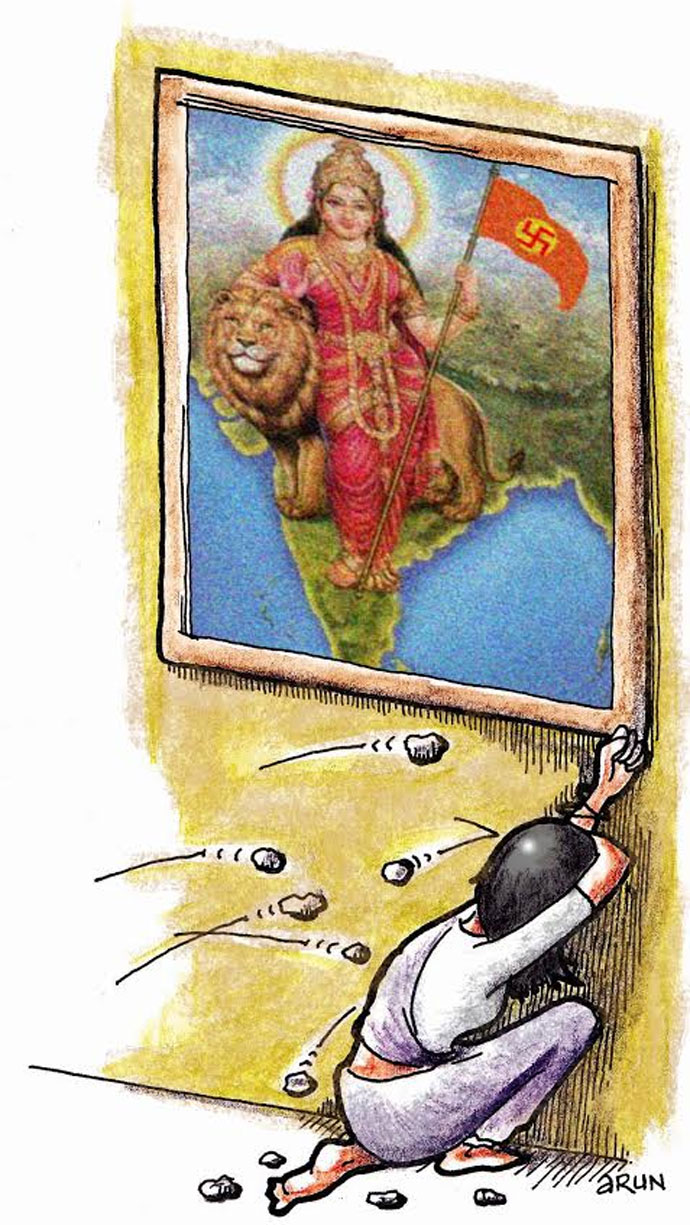 As the dirty war deepens, women will likely face the major brunt. The record of the past few months shows that governments that thrive on slogans of "Bharat Mata ki Jai" have had no compunction in plotting and perpetrating sexual assaults and violations of the matas and daughters of Bastar. As the days grow darker the need to bear witness to the darkness and stand in opposition will be felt all the more. It is in this context that the absence of the activists recently ejected will be felt all the more.

The evicted activists have, however, vowed not to give up. The JagLAG members, in an interview, have said that though they have now been forced out of Bastar, they want to go back. Though severely scarred by the chemical attack, Soni Sori has declared that she will not bow down.

On the eve of International Women's Day, she is even scheduled to address the students of JNU, some of who may well be inspired to rise in her support. The state, by clamping down, may actually be giving birth to new forces in opposition to it.

Post your comment
#Naxalism, #Women's Day, #Bastar, #Narendra Modi
The views and opinions expressed in this article are those of the authors and do not necessarily reflect the official policy or position of DailyO.in or the India Today Group. The writers are solely responsible for any claims arising out of the contents of this article.