Yashwant Sinha’s warning on Indian economy is valid, but it's not just Arun Jaitley's fault

The former NDA finance minister has raised all the right points about post-demonetisation and GST woes, but why has he not 'indicted' PM Modi?

In a scathing article written in The Indian Express today, September 27, Sinha has made the dire prognosis that the post-demonetisation and GST economy is extremely fragile, on a “downward spiral” and is heading for a “hard landing”. Sinha also castigated current finance minister Arun Jaitley in no uncertain terms in his article, which has certainly become the biggest talking point of the day.

Although Sinha, in his tenure from 1999 to 2002 as the finance minister, was criticised for some of his ventures, he’s not holding back in his assessment of what he calls the “mess the finance minister has made of the economy”. Sinha also wrote that many in the BJP are aware of the issues, but “aren’t speaking up out of fear”.

Sinha trained his guns on Arun Jaitley, saying that even before the BJP formed the government, Jaitley’s name had been picked to hold the finance portfolio. “His losing the Lok Sabha polls from Amritsar was not allowed to come in the way of his appointment.”

Sinha contrasted this with the Vajpayee era when two of the former PM’s closest colleagues - Jaswant Singh and Pramod Mahajan - weren’t given cabinet berths in 1998 as they had lost elections. 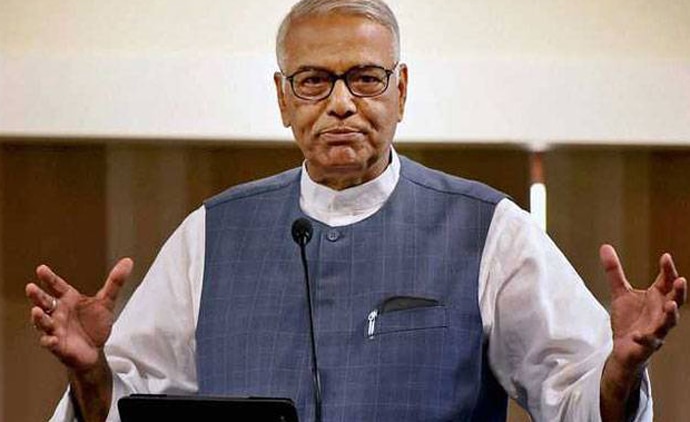 Sinha further said that Jaitley was perceived as “brilliant” and that made him get corporate affairs as well as defence portfolios in the beginning. Sinha sees this as Jaitley taking the staggering responsibilities of the crucial finance ministry rather lightly.

He says: “Finance ministry, in the best of times, calls for the undivided attention of its boss if the job has to be properly done. In challenging times, it becomes more than a 24/7 job. Naturally, even a superman like Jaitley could not do justice to the task.”

Sinha also criticises Jaitley for not utilising the global dip in crude oil prices imaginatively and wasting the “unprecedented bonanza”. He said “legacy problems like stalled projects and bank NPAs” should have been “better managed”, but “they have become worse”.

In fact, Sinha is absolutely right in saying this because bank NPAs have increased sharply under the NDA regime, with corporate bad loans to the tune of lakhs of crores of rupees written off by the present dispensation, inviting the jibe from Congress’ Rahul Gandhi that this one is a “suit boot ki sarkar”.

Shape of the economy

Sinha goes on to paint a very dire picture of the Indian economy, which is exactly what the critics of the establishment have been saying for a while now. He says:

“Private investment has shrunk as never before in two decades, industrial production has all but collapsed, agriculture is in distress, construction industry, a big employer of the work force, is in the doldrums, the rest of the service sector is also in the slow lane, exports have dwindled, sector after sector of the economy is in distress, demonetisation has proved to be an unmitigated economic disaster, a badly conceived and poorly implemented GST has played havoc with businesses and sunk many of them and countless millions have lost their jobs with hardly any new opportunities coming the way of the new entrants to the labour market. For quarter after quarter, the growth rate of the economy has been declining until it reached the low of 5.7 per cent in the first quarter of the current fiscal, the lowest in three years. The spokespersons of the government say that demonetisation is not responsible for this deceleration. They are right. The deceleration had started much earlier. Demonetisation only added fuel to fire.”

While most of this is already well-known, what’s significant is that it’s being said by a veteran leader of the BJP, who is part of the Margdarshak Mandal of the party seniors sidelined by the Narendra Modi-Amit Shah duopoly.

A very significant point raised by Sinha in addition to this grim analysis of the economic predicament is the fact that the Modi regime had changed the methodology to calculate the GDP in 2015, effectively inflating it by two percentage points.

Sinha writes: “[T]he methodology for calculation of the GDP was changed by the present government in 2015, as a result of which the growth rate recorded earlier increased statistically by over 200-basis points on an annual basis. So, according to the old method of calculation, the growth rate of 5.7 per cent is actually 3.7 per cent or less.”

Even as the finance minister and the BJP national president Amit Shah keep harping on “technical” reasons for the “temporary setback” in the GDP, Sinha minces no words when he writes that it’s the State Bank of India, the “largest public sector bank of the country", that has stated with unusual frankness that the slowdown is not transient or “technical”, but is here to stay and the slowdown in demand has only aggravated the situation. It has openly contradicted what the BJP president said just a few days ago -- that the slowdown in the last quarter was on account of “technical” reasons and would be corrected soon. According to the SBI chairman, the telecom sector is the latest entrant to the long list of stressed sectors.

Not only that, Sinha also says that Jaitley cannot be expected to fix the economy because “it was perhaps too much to expect from a person who was carrying the heavy burden of so many extra responsibilities”, essentially underlining that there is a terrifying dearth of talent in the BJP government, which is why Jaitley is so overworked and is unable to do justice to any single portfolio he has shouldered.

On the Economic Advisory Council that has been newly reformulated by PM Modi, Sinha says “like the five Pandavas they are expected to win the new Mahabharat war for us”, essentially saying that the battle is too big for them to do anything about it.

However, he doesn’t say much about the EAC chief Bibek Debroy and member Surjit Bhalla fervently supporting demonetisation even now, hailing it as a “big bang reform”, despite all the indicators to the contrary and the economy nosediving ever so sharply.

Sinha rues that even though the BJP in Opposition had strongly opposed “raid raj”, it’s doing exactly that in power. Sinha writes:

“We protested against raid raj when we were in opposition. Today, it has become the order of the day. Post-demonetisation, the income tax department has been charged with the responsibility of investigating lakhs of cases involving the fate of millions of people. The Enforcement Directorate and the CBI also have their plates full. Instilling fear in the minds of the people is the name of the new game.”

Why does Sinha leave out PM Modi?

While Sinha underlines almost every aspect of an economy in a “downward spiral” and “poised for hard landing”, he shuns naming the greatest architect of this financial mayhem - Prime Minister Narendra Modi. It’s no secret that PM Modi barely consulted anyone before announcing his demonetisation diktat. In fact, Jaitley was taken aback and had to pick up the pieces, as did the SBI, and every Indian worried about the cash crunch that followed. And even though the GST was being prepared for over a period of one year, it was launched in a “hasty” manner, which was a purely political move.

Why does then Yashwant Sinha not implicate PM Modi in any way even as he paints a most dismal and dark picture of the economy? 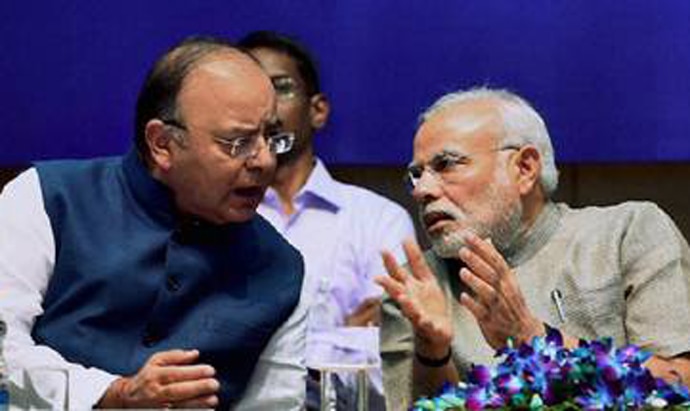 Is he trying to criticise him indirectly, because most know that FM Jaitley hardly had a say in the biggest “reforms” and “surgical strikes on black money” that turned out to be not just complete duds, but also actually near-fatal for the economy?

Sinha writes “economies are destroyed more easily than they are built”, but he simply refuses to share the blame for the economic mess on the prime minister. That’s a tad unfair. And even though Jaitley has brought in ways to legalise uninterrupted and anonymous funding for the big political parties through the electoral bond method, Sinha doesn’t say a word about that move which will make endemic corruption in political parties all the more entrenched.

Sinha signs off saying that even though the PM “claims he has seen poverty from close quarters, his finance minister is working overtime to make sure that all Indians also see it from equally close quarters”.

That’s scathing. However, we wish Sinha’s call of conscience also included an indictment of the prime minister, who has a lion’s share of the blame to shoulder.

Also read: Why PM Modi reconstituting Economic Advisory Council may not be of much help