You cannot take 1947 out of Kashmir

Mehbooba Mufti is projecting PDP as the only regional party in the state which has deep faith in the idea of India.

The story goes like this. A complaint was filed against J&K forest minister Choudhary Lal Singh after he allegedly threatened a deputation of Gujjar farmers in Jammu by reminding them of the 1947 genocide of Muslims in Jammu region.

In their complaint, the farmers said they had gone to the minister’s residence in Jammu on May 18 about some issue relating to their orchard land. They said, the minister, without listening to them, started using abusive language, asking whether "we have forgotten the 1947 massacre of Muslims in the region".

However, the temperature that day in Jammu was 45 degree.

The large scale killing of Muslims in 1947 is buried deep in the psyche of Jammu Muslims. That is why the people become apprehensive when anyone talks about the bifurcation of the state, fearing a repeat of 1947. That is why they appreciate separatist leader Syed Ali Geelani who opposes any move that is aimed at dividing the state. 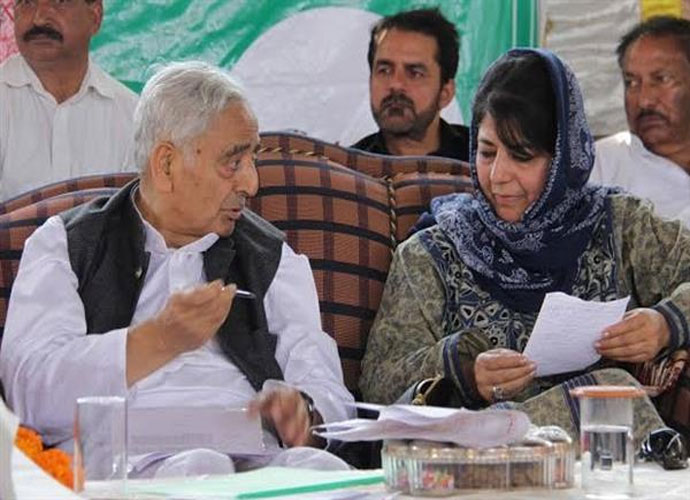 According to Christopher Snedden, around 237,000 Muslims were killed, 500,000 were displaced in Jammu in 1947, changing the demography of Jammu and reducing Muslims to a minority. Snedden in his book, Kashmir The Unwritten History, writes: "237,000 Muslims were systematically exterminated…This happened in October 1947, five days before the first Pathan invasion and nine days before the Maharaja’s accession to India."

Mehbooba Mufti in her first speech as chief minister in the Assembly, on a debate on the Governor’s House, repeatedly mentioned 1947 and the accession, while pointing out her father’s decision to side with the BJP after 2014 elections was a decision which could be equated with Sheikh Abdullah’s decision to support the accession.

Without saying it in as many words that Sheikh Abdullah betrayed the people by raising rebellion in 1953, after supporting the accession in 1947, Mehbooba accused him of betrayal when she said, Abdullah after deciding to side with India, changed his mind in just a few years and plunged the state into chaos from which it has never come out.

"When Sheikh Mohammad Abdullah in 1947 joined hands with India, it was a tough decision. When Mufti saheb [Mufti Mohammad Sayeed] joined politics, there were slogans of Rai Shumari (plebiscite) and even the mention of mainstream politics was seen as blasphemy. But my father was impressed by the composite culture of India and its democratic values during his student days in Aligarh. He could see how the poor and marginalised were empowered to choose or dethrone the Prime Minister which impressed him. He was a farsighted person and his decision to join a democratic party was the right one," Mehbooba said.

Mehbooba went on to describe her father Mufti Mohammad Sayeed a visionary who believed in the idea of India.

Also read: Kunan Poshpura to Handwara: Justice is a half-widow in Kashmir

The chief minister’s repeated assertion that her father never changed his stand since the day he joined politics in 1960s, and believed in the idea of India unlike Sheikh, who led plebiscite movement in 1953, is a move to project her party as the only regional party in the state which has deep faith in India. It is not the first time Mehbooba has stated all this but this time as chief minister of the state she was forceful and confident in her address.

Mehbooba strongly defended her alliance with BJP and RSS, saying if her party would have denied BJP the power, anything could have happened in Jammu. She then drew parallels between 1987, when Muslim United Front (MUF), in spite of winning elections in Kashmir Valley, was declared as losers by the National Conference government, triggering militancy in the state.

Mehbooba argued that if her father Mufti Sayeed would have joined the National Conference or Congress after 2014 elections, it would have been seen as a move to deny the genuine mandate of Jammu people, who overwhelmingly supported BJP, and it could have led to a repeat of 1987. She even alluded to 1947 saying it could have been repeated.

Mehbooba said it was 1987 that made Muhammad Yousuf Shah, a candidate of Muslim United Front from Amirakadal, as Syed Sallahudin, now chief of the United Jihad Council.

Both Lal Singh’s comment, which he later denied, and Mehbooba equating Sheikh’s support of 1947 with 2014 decision of her father to join BJP, is an indication that 1947 continues to be benchmark of Kashmir politics.

In spite of attempts to get over the 1947, it still plays out in the Valley politics and everything is determined by it. Even a debate in Jammu and Kashmir Assembly in 2016!

In Kashmir Valley, history starts with 1947 and it ends at 1947 and the current debate in J&K Assembly is an example of it.

#Kashmir, #Sheikh Abdullah, #PDP, #Mehbooba Mufti
The views and opinions expressed in this article are those of the authors and do not necessarily reflect the official policy or position of DailyO.in or the India Today Group. The writers are solely responsible for any claims arising out of the contents of this article.