I will not join the media cacophony to label him a 'terrorist sympathiser'.

Zakir Naik, the controversial 50-year-old Mumbai-born televangelist, evokes strong reactions depending on whom you speak to.

He is viewed by some as someone who misuses the bully pulpit as a preacher to inspire terrorists and run down other religions. There are others who believe him to be a conservative Islamist pushing the Saudi Arabia inspired Salafist Wahabi brand of Islam.

However, in large parts of the Arab world, particularly in the Gulf, Zakir Naik is viewed as an accomplished Islamic scholar, a pacifist, a man wronged and a victim of the West-inspired media.

The truth, as ever, lies somewhere in between the two extremes.

Also read: Why exposing Zakir Naik might be a better idea than banning him

That Zakir Naik enjoys the patronage of the high and mighty in Saudia Arabia, Qatar and the UAE is a given. He has a resident visa of several Gulf countries, travels at will, enjoys unfettered access to the rulers in the Gulf and large parts of the Islamic world.

His channel, Peace TV, is beamed out of the UAE and has a large viewership across the Middle East (he claims the figure is about 200 million).

Zakir Naik is a big draw in the Middle East. 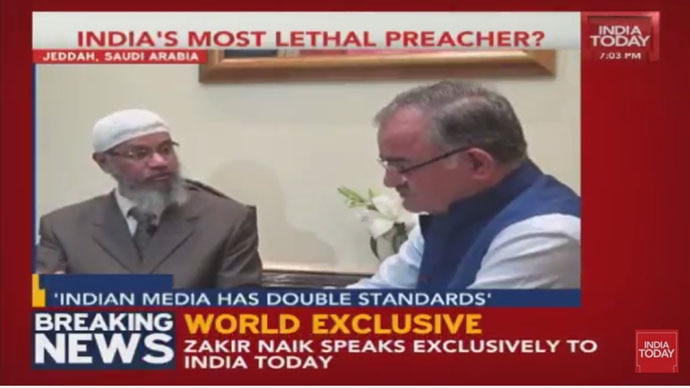 I had the occasion to interact and with and interview him last week in Jeddah. He arrived at the hotel where the interview was being conducted without much fanfare. All heads turned towards him the moment he walked into the lobby.

Arabs and Indians, out enjoying a late weekend lunch with their families, made a beeline for him, shaking his hand and posing for photographs. Surprisingly, even a handful of Europeans walked up to him and chatted amiably. An hour later, by the time the interview finished, word had spread, and the lobby was crowded by his admirers, hustling for selfies and autographs.

Naik spends most of his time in the Islamic world, and travels around the world lecturing and preaching. He went to an English medium school, and is far more comfortable in the Queen's language than in Urdu or Hindi and makes no effort to hide this.

He is different from most of the other religious leaders of his community, both in the manner he dresses and in his choice of the English language.

There are more than 200 mn fans but if ten misunderstood me then who should be blamed: Zakir Naik #DrTerror https://t.co/RUcJFlSaDs

He is almost always dressed in a suit and tie instead of the salwar kurta or sherwani. His sartorial style is at odds with his image as a hardliner. The only thing he has in common with the other Islamic leaders is the skull cap.

Also read: What Islamist, Hindutva preachers of hatred can learn from Gandhi

Daily Star's report was picked up by Indian media, but they failed to do the correction done by Star: Naik #DrTerror https://t.co/qebsGmdl1t

Seemingly unfazed by the heat that some of his remarks have generated in India, he didn't give the impression of being under pressure or being hemmed in by the welter of charges laid at his door.   I find myself distinctly uncomfortable with his overdose of religiosity, his hard edged puritanical views and his thinly disguised attempts to propagate his faith by running down other religions.

Naik, however, has a rather benign view of his role as a preacher.

"As a student of religion, I do a comparative study. The attempt is not to show others in bad light but to contrast Islam with others. They too have a right to do the same," he says by way of explanation.

A view that has few takers. 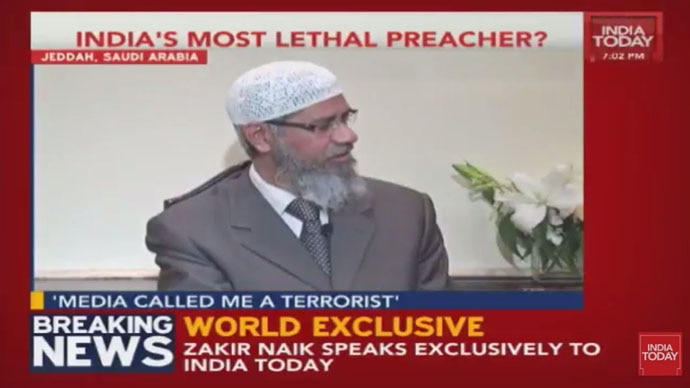 For most of the interview, Zakir Naik was feisty and animated, at times even angry with the media.

He refuses to accept that he is the cause of division, and bristles at being compared or equated with other hardliners like the Pravin Togadia or Sadhvi Prachi.

"Don't compare me with him. Play both our speeches in full and let the people judge who is doing the provoking," he says.

I condemn all terrorist acts as killing an innocent person is like killing the humanity: Zakir Naik #DrTerror https://t.co/eSNl0AlPd1

In the course of the interview, he vigorously protested his innocence, denounced terrorists and terrorism, termed the ISIS "anti-Islamic", refuted allegations that he had asked people to take up arms against the USA, accused the media of distorting and even doctoring his statements. As a believer and a liberal, I have many issues with Zakir Naik.

I believe in reconciliation, not conflict. I believe in engaging with other people of other religions and above all in peaceful co-existence. The politics of Zakir Naik unnerves me: religious identity must not be used to polarise communities but to build bridges, especially in this age of terror. And yet, I will not join the media cacophony to label him a terrorist sympathiser.

Zakir Naik has some explaining to do. He should return to India and face his critics. But he must also not be subject to a media trial. Everyone deserves a right to be heard, to be presumed innocent till proven guilty.

#ZakirNaik to India Today: I back Modi's quest to improve relations between two communities https://t.co/xY24JDdOod pic.twitter.com/N1cKzzSkM6

#ISIS, #Terrorism, #Islam, #Zakir Naik
The views and opinions expressed in this article are those of the authors and do not necessarily reflect the official policy or position of DailyO.in or the India Today Group. The writers are solely responsible for any claims arising out of the contents of this article.