Recently he raced to his second successive Super Series title in Australia.

Ace badminton player Kidambi Srikanth has swiftly exploded on the international stage. On Sunday, he raced to his second successive Super Series title in Australia, beating none other than reigning Olympic champion Chen Long from China.

The shuttler was at his offensive best as he beat his formidable Chinese counterpart 22-20, 21-16. It was his maiden Australian Open title that came a week after the win at the Indonesia Open. In both places, he upset current world number one Son Wan Ho en route the titles.

Overall, it was Srikanth’s fourth Super Series title and makes him a hot favourite for the upcoming World Championships in Glasgow, starting August 21.

“I am happy to maintain good form and win titles. I know everyone will start talking about the Worlds and what this means but for me I’m not thinking that far, I’m just happy to be doing well for now,” a jubilant Srikanth said after the win.

For a change, Indian badminton is not in news because of Saina Nehwal or PV Sindhu. Both women have been momentarily pushed to the background, thanks to the brilliant performances of the male shuttlers. Srikanth, 24, was playing his third Super Series final this season. In April, B Sai Praneeth won in Singapore, getting the better of Srikanth.

Srikanth and HS Prannoy then blazed the field at the Indonesia Open last week. Prannoy had two big scalps in Lee Chong Wei and Chen Long but bowed out in semi-finals. Srikanth, however, made the most of the opportunity on both occasions. “It’s is just that I’m not thinking of winning or losing. I missed competitive badminton and want to enjoy my game,” said the world number 11.

Indeed, Srikanth is playing in a different zone. He was impressive at the Rio Olympics too where he reached the quarters and gave a mighty scare to the legendary Lin Dan before losing. But as he pushed his body post Rio Games to pick an ankle injury, the talented shuttler took some time to return to full flow.

“It’s like it happened because I missed that period of competitive badminton. I wanted to hang in and play as many matches as possible. I am going through my best phase.”

In six meetings, he beat Chen Long for the first time. Long’s defence is difficult to break, but Srikanth was ready for a tough battle. The Indian, who rose to number three in rankings in 2015, is now more mature and strong. There was a phase when he had frequently lost after his sensational maiden triumph in China Open in 2014.

A transformed player, he is now doing justice to his enormous talent. Srikanth said he had to be smarter to tackle the conditions.

“These conditions are such that you can’t really attack, it’s a bit slow, you have to be prepared for a long match. In all the breaks I had the advantage, (coach) Mulyo told me to keep it going, not to make mistakes and allow him back into the match. My attack worked really well.” 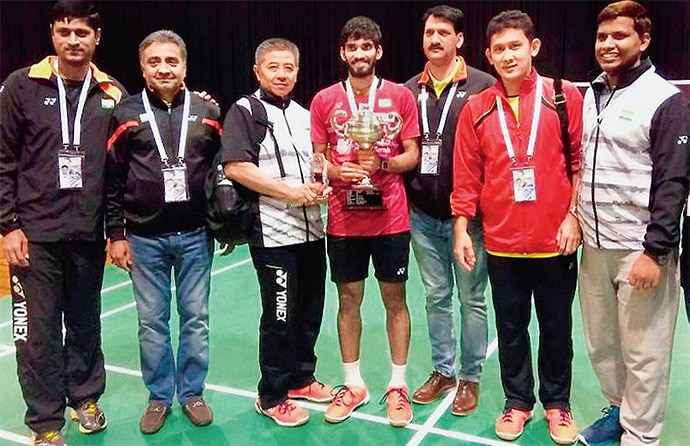 “I’m playing better after the Sudirman Cup. I should thank my physio for keeping me fit for these two tournaments. It was tough for me on Tuesday and Wednesday.”

The opening game was tight with long rallies but Srikanth was patient. In the second game, the Indian took a 6-2 lead and never allowed Chen, the two-time World and All England Champion, to bounce back. “There was a long rally early in the second game and after I won that I got more confident. If he had won it he would've kept doing it (rallies).”

He thus becomes only the fifth player in the world and the first Indian male shuttler to contest three consecutive Super Series finals.

Also read: Shame Virat Kohli has no respect for legends like Anil Kumble without a strong BCCI

#Chen long, #Super series, #Kidambi Srikanth, #Badminton
The views and opinions expressed in this article are those of the authors and do not necessarily reflect the official policy or position of DailyO.in or the India Today Group. The writers are solely responsible for any claims arising out of the contents of this article.

The writer has been extensively covering sports for last 10 years.