Didn’t see this coming, did you?

Four days into the World Cup, and Argentina, Brazil, Germany and Spain together have the same number of points as Iran. There might still be two group games to go for each of them, but the possibility of some of the big names missing from the knockout stages is looming large.

Let’s look back some of the talking points so far:

The old(ish) man and the sea of underperformers

Yes, he missed a penalty. Yes, he looked like his nerves were shot. And yes, he needs to step it up for his country. But, what was the rest of Argentina doing while Lionel Messi had a day from hell against Iceland?

Kun Aguero may have scored the goal, but the general theme for the side seemed to be to pass to Messi and hope.

The midfield was overrun by a very well organised Iceland side, and the defence seemed hell-bent on doing things to earn them a podium finish at the Bloopers of the World Cup segment. 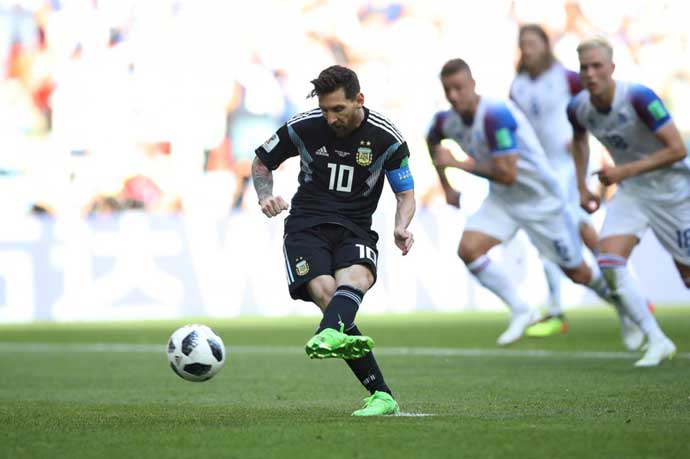 In a tough group made even tougher, another performance like this could mean an early flight home. As for Messi, maybe he should wear a Barcelona jersey under his Argentine one? Could help.

Of Germany, Mexico and Chucky

Just how ordinary were Germany last night? Their midfield had a Bastian Schweinsteiger-shaped hole, leaving the defence trying to fend off Mexicans running at them , and leaving the defending champions with a virtual final on Saturday against Sweden this early in the tournament. Mexico, on their part, were absolutely brilliant.

Moment of the Day 👀When @HirvingLozano70 scored against the reigning #WorldCup champions to give #MEX a dream start to Russia 2018 ️⚽️🎥 Highlights 👉 https://t.co/LOdKDX2Cwn📺 TV listings 👉 https://t.co/xliHcxWvEO pic.twitter.com/oYMWN6uuCM

They played with verve and purpose, never overawed by the occasion or the opposition, and deserved the win. The star of the show was undoubtedly 22-year-old winger Hirving Lozano – not only did he score the winner, he ran Germany ragged with his pace and skill throughout.

Nicknamed Chucky because of his resemblance to the killer clown, he’s sure to induce nightmares for a few more defenders.

You knew it was going in the moment he shaped up to hit it. The occasion never escapes Cristiano Ronaldo, and once Adidas launched a campaign with his bête noire Messi holding a goat – signifying that he is the GOAT, the chance to score a hattrick against Spain wasn’t one Ronaldo was going to let go of. The goal in itself was sublime. The curve, the dip, the precision – Ronaldo rolled back the years to get Portugal what could turn out to be an invaluable point. Let’s hope the two keep elevating their game to new levels every matchday.

This Portuguese commentator believed it was going to be a goal 5 seconds BEFORE Cristiano Ronaldo kicked it. 🔥🔥🔥🔥🔥🔥 pic.twitter.com/x2Mry518B8

It may yet play out to script, but this World Cup suddenly seems far more open. The bigger teams look far from the finished article, with structural issues in almost all of them, leaving the door just that little bit ajar for an outsider to get a look in.

Early days, but could we see a New World Order, or is it another false dawn?

Also read: I watched Sunil Chhetri play for the first time. It was a night to remember

Post your comment
#Football, #Fifa world cup 2018, #FiFA World Cup
The views and opinions expressed in this article are those of the authors and do not necessarily reflect the official policy or position of DailyO.in or the India Today Group. The writers are solely responsible for any claims arising out of the contents of this article.