Champions Trophy 2017: Why losing to Pakistan is a good thing for India

This if anything was a wake-up call for the 2019 World Cup.

India didn’t just lose to Pakistan, they lost to themselves as well. Making it to the finals, with a less than adequate team, and sticking to that winning combination, was pushing it, one game too many.

In spite of a batting top order that home-delivered India’s wins, the team refused to see the rest of the batting for what it was – and worse, continued to believe that four frontline bowlers will be enough.

As it turned out, against Pakistan, it was hard to tell who the frontline bowlers were – except for Bhuvneshwar Kumar and Hardik Pandya, everyone went for more than seven runs per over.

Which isn’t the end of the world, or the game, one-day totals in excess of 400 have been chased down on similar flat tracks – but very early, it was obvious, India was bereft of a Plan B or C.

After Jasprit Bumrah overstepped, handing Fakhar Zaman a life, he just wasn’t able to pull himself together; either that, or both Zaman and Azhar Ali had already spotted something which India hadn’t – that Bumrah, one of India’s four frontline bowlers, could be taken apart. 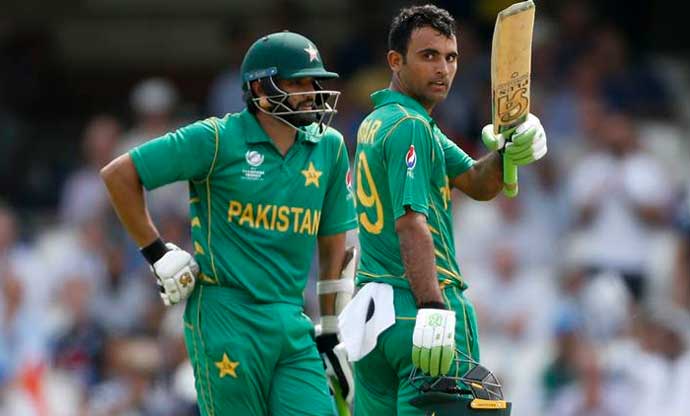 Bumrah’s bowling was part of a greater Indian plan – it was quite simple, to not give Zaman room outside off. Often that meant, Bumrah bowling wides down leg, or not settling on steady lines or lengths.

The left-right batting pair further unsettled Bumrah’s already shaky lines – often he was bowling to Zaman what he should have bowled to Ali and vice versa. After three overs for 24 runs, Bumrah had to be taken off.

Kohli’s hand was forced, he had to bowl Ashwin as early as the eighth over. Which was a bold move but it also showed us what we already knew – that Hardik Pandya was a batting all-rounder and in the bowling hierarchy, he was pretty much the fifth bowler.

Like Bumrah before him, Ashwin went for 24 off his first three overs. His first spell of four overs went for 28. His lines weren’t too different from those of Bumrah’s restrictive lines – down middle and leg, he too bowled his quota of wides.

India wasn’t trying for wickets, not surprisingly, they didn’t get any.

In a way, it seemed India had taken a T20-IPL approach to a one-day game. Even before they stepped on to the field, they had factored chasing a big total. And to chase that big total, they put their belief in their batsmen, as they had in the previous games. 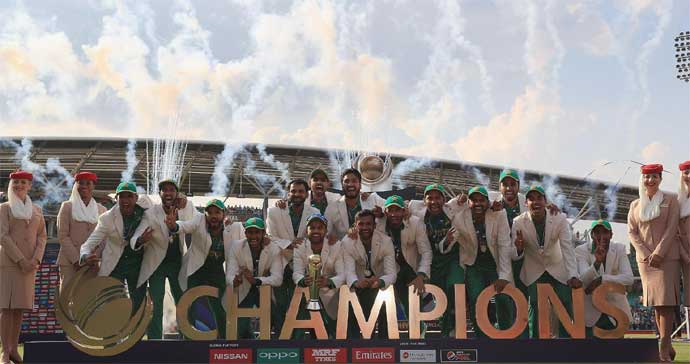 When you think of RCB, you think of its batsmen, whether they have any bowlers is beside the point – they appear to be there to make the numbers. But the deal with RCB is, that they always seem to be a bowler or two short. And to compensate that, they play another batsman or a batsman who can bowl a bit.

Virat Kohli is both India and RCB captain; he’s a man with an uncompromising cricketing focus. Part of this focus is to play seven batsmen and four bowlers to give India that balance and dare it craves for with the bat.

That dare with the bat, however, will be often achieved, with a terrifying scare with the ball. As against Pakistan in the finals. Good as India have been in the tournament, they have still not allowed themselves to be even close to their potential – the batsmen are there on paper, all-rounders by name and little else.

Just as Yuvraj Singh is a pale shadow of the fielder he once was, and rarely if ever bowls in internationals, both Ashwin and Jadeja might cut it as Test batsmen but in ODIs, they do not pass muster.

More worrying is the refusal to accept that neither player is as effective with the ball in ODIs or T20s as they are in Tests. While Jadeja appears more like a fielding all-rounder, Ashwin’s fielding is stuck in a 1990’s timewarp.

Against Pakistan, Ashwin went for 70 off his ten, Jadeja 67 off the eight he somehow bowled.  When one of the five have an off day, the go-to guy is Kedar Jadhav. Still an enigma, Jadhav is still the last resort bowler.

In the finals, he was first brought on to bowl in the 39th over; his third and last over, was as late as the 45th over. He had already made up for Jadeja’s two overs, he was now making up for Bumrah’s tenth over. Jadhav is the sixth bowler.

With nine 6s between those two innings. With such brilliance, there will be unpredictability – which could come with either bat or ball. Expecting consistency from him is not the solution. Letting him be your match-winner, and preparing for the perils of such a high stakes’ player could be the only way. Pandya is a free-spirit, and plays like one.

But to get the most out of Pandya, India will need to cushion its bowling a bit more, and prepare for days when he is more suited to be the sixth bowler. And for that, India must know which of the batsmen it can let go off or for that matter, scout for bowlers who can do more with the bat.

It will take some tough decisions, and delaying them won’t make them any easier. India need to look no further than Pakistan – they were the only team in Champions Trophy 2017 that introduced debutants – and not just one, but three of them.

Pakistan started by losing to India by 120 runs, they evolved to beat a stagnating Indian team by 180 runs.

Possibly a bit of déjà vu for Virat Kohli – after all those RCB defeats, he’s become an absolute dude at "taking it on the chin and moving on".

Could be better though, to drop some of that obstinacy, whoever is responsible for the team composition, and taking it to the mind and moving on in the true sense of the word.

Now is not the time to be romantic about anyone, this if anything was a wake-up call for the 2019 World Cup. It will be foolish to ignore it. Not everyone is fit for 2017, so to expect them to get any better is living in denial.

Over ten years back, on March 17, 2007, a high profile Indian team went down to Bangladesh in a World Cup game that sparked an early exit. If the warning signs are unread, it could be just as embarrassing for some of the greats of the game.

For starters, Rishabh Pant should play every match in the West Indies.

Also read: Pakistan played their best cricket in years and India the worst in recent times

#Champions Trophy 2017, #IndVsPak
The views and opinions expressed in this article are those of the authors and do not necessarily reflect the official policy or position of DailyO.in or the India Today Group. The writers are solely responsible for any claims arising out of the contents of this article.