The cricket World Cup and the glorious uncertainty of life

The match between England and New Zealand proved to be nothing less than what anyone would want a final to be. But in the end both teams deserve the glory, not one.

July 15, 2019, World Cup final started like most World Cup finals. The increasing intensity and the tension building up, most teams convinced it could be them instead of the actual finalists, both the finalists calling themselves underdogs, hiding the fact that cricket on most days is a day’s game. In days like these, it’s often a moment’s game. Just before the actual toss, one could see Britain’s famed red devils parachuting into Lord’s cricket ground bringing the match ball and handing that to the umpire. How about this for a spectacle! Trust the English do this!

Both finalists — New Zealand and England — were going to be first-time winners, led by captains who are astute and methodical but with contrasting teams. England had completely rebuilt itself after the ignominious exit in the last World Cup. From a team playing percentage cricket, Eoin Morgan has transformed it into cricket’s power hitters and in a way fearless as well. Captain Eoin Morgan had travelled a path very few cricketers travel. Born in Dublin, represented Ireland, switched to England and had to prove himself the hard way before the captaincy mantle came his way.

New Zealand, a country with half a million population, was represented by cricketers who double-up in other games as well, are one of the world’s most efficient. You got to be efficient when you need to choose cricketers from a population that is less than that of New York City. They are always looking for that sneaky single, a fielding side that is tightly bound like Maori warriors, not a great batting line up but a team that can consistently score 230 to 250 runs and then start their strangulation on their opponent. Their captain Kane Williamson, arguably the greatest New Zealander but unarguably the smoothest gentleman of world cricket is a leader most nations will die for in this age and time. Calm, composed, dignified, risk-taker and everything else rolled into one.

In a way, it’s also Karma that brought both the sides to the final. England had to win both of their last two league games against good opponents to qualify for semi-finals. New Zealand had to wait till the last ball of the league stage to assure itself of a semi-final qualification. Against India in the semis, New Zealand had shown nerves of steel and strangulated an opponent with superior firepower. England on the other hand, rolled over their traditional rivals, Australia. 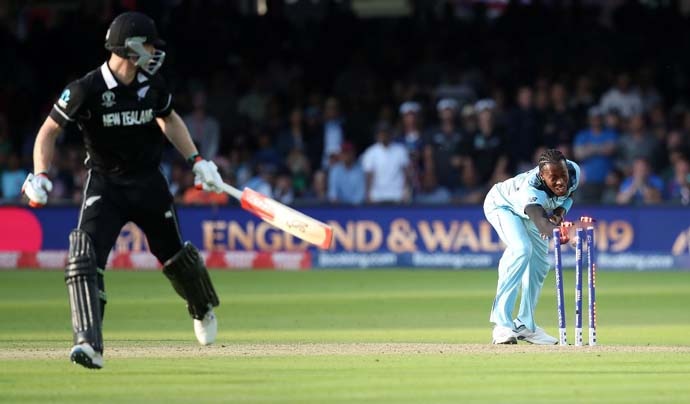 Both England and New Zealand deserved to be in the finals given the way they played. (Photo: Reuters)

New Zealand won the toss and started like the way they always do. An out of form opening pair trying to find its footing against a master class pace bowling, the middle order led by Ross Taylor and Kane Williamson grinding it out and always keeping their side in the game — though it might look otherwise when watching from outside, the late flourish that threatens to come but never arrives. After their fifty overs, they had hit their sweet spot score of 241.

For a belligerent side like England whose openers don’t portray fear, a target of this size always appears modest. This is the mistake most sides made including India and paid a bitter price. How often can an opponent measure your heart, tenacity and team bonding? Most commentators and cricket pundits wrote New Zealand off and the world was getting ready for an English win. The lesson in history is often you forget it, but you will be made to go through it.

England didn’t start the way they normally start as the pressure of a World Cup final made the opener not to throw caution to winds. Thanks to the excellent bowling of Henry and Grandhomme, mid-way through the innings, it looked possible that the improbable is going to happen and the nice guys might, after all, finish first and we all need to alter our textbooks. Five tickets down, England struggling and the pressure getting to them — it seemed to be a matter of time before the Englishmen will fold. 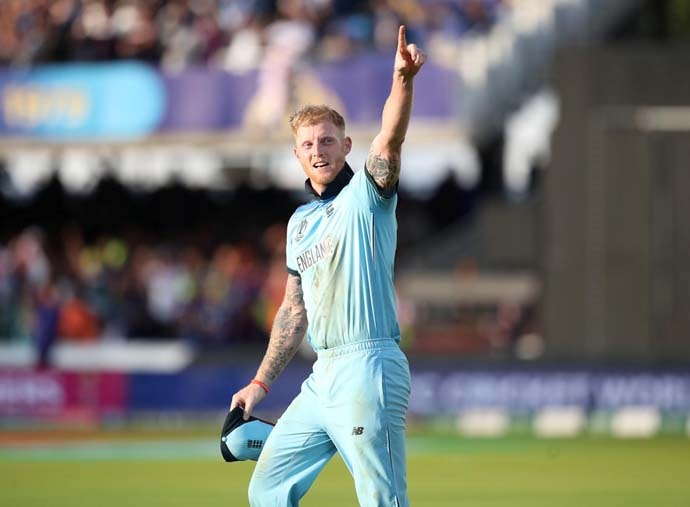 Ben Stokes was the man of the moment who turned things around for England. (Photo: Reuters)

Ben Stokes, often abused, vilified and known as the man who lost the previous World T20 final at Kolkata single-handedly by giving four sixes in his final over, chose to redeem himself at the big stage. Eschewing his big-hitting and in the company of Jos Butler, played percentage cricket knowing fully well, the closer they get they can make a match of it. After Butler’s loss in the 45th over, the game could have gone anywhere from there. But Stokes carried England closer to the finish line.

It was here that things started to turn. The catch by Boult of Ben stokes in the 48th over, with Boult’s foot touching the ad board before it was relayed to the other fielder, could have been a life-altering catch. Any other day, with wind on the right side, a not-so-clean hitting (only a bit), a boundary that is millimetres inside, the catch would have won the World Cup. But today, life had it the other way and it was signalled a six. It all boiled down to the last over where England needed 15 runs off 6 balls. (Photo: Reuters)

More crazy things were in store for the pundits who believe life is always fair and square. With England needing 15 off the last over and with Boult bowling it, the fourth ball set in motion things most of us won’t understand for the rest of our lives. With Stokes drilling the ball to midwicket and scrambling for two, Guptill almost went for a perfect throw and only to find the ball deflecting off Stokes' bat but running for a four.

No cricket match will see a six like this and adding to it the umpiring error of adding one run (the second run needn’t be counted as it’s a total of one run that was taken and four of the overthrow). The next two balls played itself to its script and took the match to a super over after a tie. The match went into a super over only to know that both teams made 15 runs equally. (Photo: Reuters)

More craziness was in store as again the super over ended in a tie. Only for the ICC rules to decide England to be the winner as it had the most number of boundaries hit than New Zealand. 26 to 17. No faulting the ICC rules as it was pre-decided and agreed. The goal post wasn’t shifted in the middle. But a World Cup match like this and the winner be decided in this way is not something I’m sure even the rule-makers have thought through. When players put their body on the line and practice hard, when we all seem to take life in its stride, twist in tales like these are cruel and removes the sport of its inherent charm.

This is also a day where everything combined to produce cricket’s outstanding match to date and also a day where a side couldn’t lay its hands onto the Cup because it didn’t lose the game but equally didn’t win the game either. That’s why maybe the betting company Sportsbet chose to refund over $700,000 to close to 18,000 people who had bet on New Zealand winning this World Cup. As their spokesperson said, "Let’s not beat around the bush. For a World Cup to be decided in this manner is an absolute disgrace and the punters shouldn’t pay for the ineptness of the ICC."

What's more, they extended this to the punters who betted for Federer winning the Wimbledon, as well. A game that was as crazy as this but still a winner was found with less outside influence. New Zealand played great cricket in the World Cup. They can console themselves and say that their time will come. (Photo: Reuters)

New Zealand can console itself that its time will come. But in a sport that celebrates randomness and thrives on it, that chance might never come. Like India, topping the league stage, just 40 minutes of play changed the whole equation and before they knew they were out of the tournament.

What would you tell a young boy or girl watching this game and trying to derive answers? That life is always fair and rewards the skilled, large-hearted and most disciplined? Or there is something else to life that we are yet to decipher — things happen for a reason, whatever you don’t get immediately, you get it in abundance some other time? I don’t have any answers but I might try something like this. Fans need to show sportsmanship as both teams did. (Photo: Reuters)

Be passionate and gentlemanly like Kane Williamson who displayed sportsmanship at its finest when everybody around him was losing their heads after the final. Be humble and a team builder like Morgan whose methodology and foresight changed his team to become world-beaters. Be willing to give more than you take from this game like Ben Stokes. All the players who played in the final deserve to be champions and they will have one hell of a story to tell to whoever listens to them.

Also read: Stop fuming over the 'absurd' boundary rule that helped England win World Cup. Here's why we must stand with ICC

Post your comment
#Super over, #World Cup Final, #Eoin morgan, #England cricket
The views and opinions expressed in this article are those of the authors and do not necessarily reflect the official policy or position of DailyO.in or the India Today Group. The writers are solely responsible for any claims arising out of the contents of this article.