How to embrace India’s series in Zimbabwe

Is it even possible?

As tall claims go, this is right up there. The buzz for the "Killer Cup" is possibly on par with first class matches in India. Both are telecast, but apart from a handful of selectors and players’ families and friends, is anyone watching?

I followed the last India-Zimbabwe series mostly on the car radio. It’s far less embarrassing. You don’t have to look at players, constantly reminded, you don’t know who they are. The grounds here are bigger and look even emptier, nothing drains the enthusiasm from a match more than an empty ground.

By the end of it all, you’re almost good friends with the five-ten people the camera keeps on trolling. Mostly, they’re yawning. If they’re not sleeping. In the first match, two gents were seated at a table. It was an odd sight.

Radio spares you such sights. The quick shifts from English to Hindi commentary are an art form in itself. Radio will help you learn a few Zimbabwe names, who knows, maybe all of them. By the end of a quick listen, Chamu Chibhabha and Elton Chigumbura will be rolling off your tongue like Mahendra Singh Dhoni.

And deep down you want to be connected to the cricket, don’t you? Okay, maybe not with this series, but what’s the harm in trying? 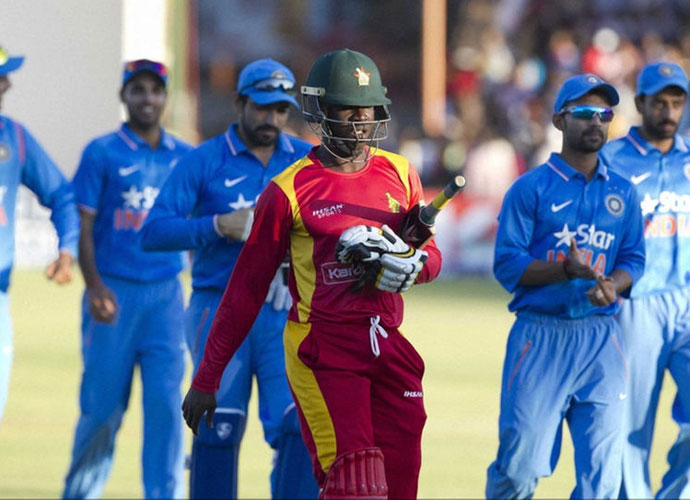 Almost all the fifty overs seem like the middle overs, more so in Zimbabwe.

KL Rahul could be a future great. Already he’s into a rare mode of either not scoring at all or scoring centuries. Even he didn’t know he was the first Indian to score a one-day century on debut. Already, Virat Kohli has immense belief in his RCB team-mate.

He backed him in the Test series Down Under where he scored a century, he backed him in the IPL too. Who knows where all this backing will take him? Could he become a first choice opener for India instead of Shikhar Dhawan? If so, the foundations are being laid right now in Zimbabwe. Do you want to miss the start of something big? Can’t you just hear them crowds chanting KL! KL! No? How about, Rahul! Rahul!?

Okay, so there’s something about KL Rahul’s demeanour that’s too smug, and you just can’t warm up to him, but no harm in trying, is there?

If a bunch of anonymous players doesn’t do it for you, surely Dhoni will? Why? Err, because he’s Dhoni? In the twilight of his career, leading a team of rookies, what can be more attractive? Okay, Kohli leading the A-Listers to wherever but surely you get the point?

Dhoni doesn’t play Tests anymore, and you have to cherish whatever little you get to see of him, even if it’s against Zimbabwe. And India is playing so many Tests this season. It’s as if, the entire revenue stream has been turned upside down because of a cricket conscience – to hell with the money, we want to save cricket first. But yeah, there won’t be any Dhoni in those five-day games, so enjoy it while it lasts.

What! You’ve already moved on, oh well, had to still try, and Dhoni is still a very compelling reason. Even if you just see him perform in huddles and behind the stumps and shrug at the occasional misfield. Something deep down tells me that this will be a riveting chapter in Dhoni’s cricket-cycle. And it’s got nothing to do with Cycle Agarbatti.

The one-day format can be repetitive. Almost all the fifty overs seem like the middle overs, more so in Zimbabwe. Not being engaged is far from heresy.  Give it a few more days, that good old IPL format will be back, India plays three T20s. The timing is almost the same as those IPL afternoon games that nobody watched – 4.30pm IST.

By the time you’re back home, lounging in your La-Z-Boy, remote in one hand, beer in the other, it’ll be down to those make-or-break last five overs.

An anonymous Zimbabwean will be bowling to an anonymous Indian. By the end of those five overs, you’ll have a new hero. And that’s what cricket is all about. Knew it all along, there was redemption for the series. If only they had started with the T20s, there would’ve been far more context to the ODIs.

#Mahendra Singh Dhoni, #Cricket, #IndVsZim
The views and opinions expressed in this article are those of the authors and do not necessarily reflect the official policy or position of DailyO.in or the India Today Group. The writers are solely responsible for any claims arising out of the contents of this article.