IPL 2017: How Virat Kohli can lead a bunch of fallen men

RCB’s next few matches could give us a peak into his powers as a leader. It could be both rewarding and ruinous.

Technically, RCB can still make the play-offs. But for a team that didn’t make it to the ground in the last two matches, that’s a long shot. If RCB were flattened for 49 in their match against KKR, four days later they were walloped by the Gujarat Lions.

RCB are silent, Virat Kohli, even though he speaks in the customary post-match interviews, is silent. He speaks by rote, when a team goes downhill as his, there’s not much to be said - all you can hope is that it ends soon.

But it won’t. Not for RCB, not for Kohli. There are five more arduous matches to somehow turn up for. The team composition can be tossed around but Kohli will remain captain, and in all likelihood, open the innings.

After the heady success as an opener in IPL-9, where he piled up four centuries, scored nearly a thousand runs, that too at a strike rate in excess of 150, this year is turning out to be frugality in the extreme.

So far in five matches, Kohli is striking at 126 - acceptable for most Indian openers in the IPL, but way too conservative for RCB’s liking. There are two half centuries but his batting average is nearly 50 runs down from the heady highs of 2016.

In 2016, Kohli almost single-handedly rode RCB into the finals. In 2017, Kohli is being weighed down by an almost wobbly bunch of erstwhile T20 greats. Like Kohli, both AB de Villiers and Chris Gayle have not played all RCB’s matches this year - while both Kohli and de Villiers were late entrants, and played five out of nine matches, Gayle has featured in six.

AB de Villiers has one 50 (an 89 not out in a lost cause), but just 61 runs from his other four games. He has looked unsure against spin, unable to weigh in during Kohli’s tough phase.

For a player who Kohli has often referred to as "the best batsman in the world", de Villiers appears to only turn up, much like a 12th man, when it’s time to field. Such is the punishing nature of the format, and more so, the tournament, even the best can start to look quite ordinary. 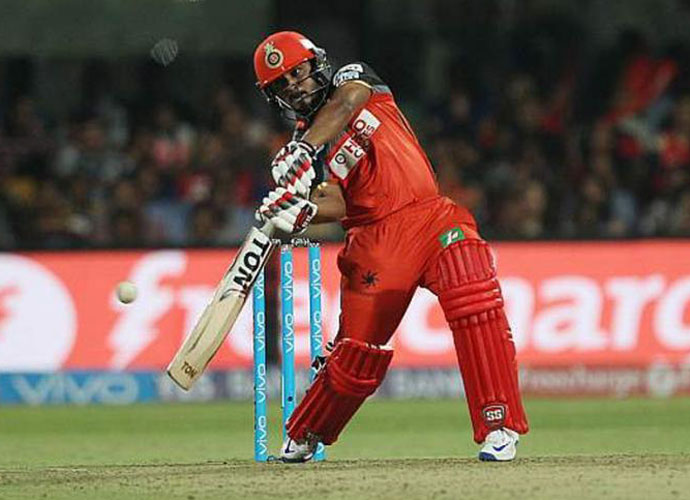 Kedar Jadhav in the middle order has shown much promise. Photo: BCCI

Compared to Kohli and de Villiers, Gayle’s numbers look even more jaded - like de Villiers he has only 50 (a 77 in a winning cause, at a strike rate of 200+), though from his remaining five matches he has just 75 runs, with his tournament strike rate dropping to 125.

For most batsmen, these numbers would be more than acceptable, but for RCB to win, these three batsmen needed to overcompensate not just their weak bowling but the absence of KL Rahul on top.

Kedar Jadhav in the middle order has shown much promise, and far more threat than RCB’s big three but it’s way too often stopped shy of defining the match. Jadhav has played eight of nine matches, although he’s been striking at 160, his average of 29 has been more of a support cast than the leader he needed to be.

In the match against Lions, he had the measure of the bowling but switched off and threw it away in only the ninth over - a 31 off 18 balls would’ve served well as a lower order charge, but did nothing to control the innings. It would go down as just another Jadhav cameo, another lost opportunity.

As for the support cast, they have been woeful - both Mandeep Singh and Stuart Binny are in their eighth IPL season, but looking at them play, you’d be mistaken for thinking each match was their first.

While Binny is picked as a lower order batting all-rounder, Mandeep is supposed to be a top order batsman. Binny has bowled four overs so far and somehow wrangled three wickets. With the bat it’s 77 runs at a strike rate of 111. Mandeep has 73 runs in eight matches, with an unacceptable strike rate of 90. Top that, he ran de Villiers out in the last match.

At which point, Kohli just looked away. There was nothing else to say or do. Kohli had lost his anger, quite possibly lost all hope in this bunch. RCB slid to 60/5 with 10 overs yet to be bowled.

If Mandeep’s numbers are dismal, then Shane Watson’s horror run with the bat is symptomatic of a far more acute illness that plagues RCB - in five matches, Watson has cobbled together 61 runs at a very unT20ish strike rate of 96.

If that wasn’t bad enough, Watson has bowled nearly 15 overs – two wickets for his troubles at an economy of 10.53. No wonder RCB benched him and left him to chat up Michael Hussey on the sidelines. Even there, he seemed off the boil.

While Gayle is 37 and Watson nearly 36, and both might yet have a few seasons of franchise cricket in them, it’s doubtful either player has a future with RCB. Kohli must play each match with this knowledge - that two of his overseas’ mainstays have been largely redundant. If Kohli started off doing the job of one Kohli - that of attacker, nourisher, sustainer - he now also has to overcompensate for the lacks of others.

It’s bad enough if Kohli doesn’t turn up on some days. Then to sit and watch the team do nothing, match after match, that can be sapping. No matter how much energy Kohli might have, being part of a train wreck takes its toll.

The best Kohli can do is look to bat 20 overs. Nobody else is going to do it. There is no hurry. There’s nothing left to prove. Just go back to the Zen of cricket clichés - play each ball on its merit, don’t expect the others to, for there’s little merit left in them.

And what good are leaders, if they can’t show those lost the way?

Post your comment
#RCB, #Virat Kohli, #IPL 2017
The views and opinions expressed in this article are those of the authors and do not necessarily reflect the official policy or position of DailyO.in or the India Today Group. The writers are solely responsible for any claims arising out of the contents of this article.