Can one man defy a DNA of cricketing chaos?

There's a joke in the IPL, it's repeated every season: Delhi Daredevils. It's not a team. It's a random collective of cricketers who come together to lose their sense of purpose. That's what a badly run franchise does to its stakeholders, be it the fans, the players, the coaches, the owners.

The owners? Who are these guys? What do they own? A building enterprise? With DD, they've deconstructed whatever they had in the first season, year after year, with meticulous lack of method but with an abundance of thoughtlessness. Players, coaches, whole teams have been picked and dropped, even India's great World Cup winning coach, Gary Kirsten couldn't do much, what could an U-19 guy do?

What if that U-19 guy was Rahul Dravid?

From the IPL auction table onwards, there was something different to DD this time. They had a computer printout on the table. This printout called the shots right through the auction. Who to chase? Who to buy? What's the limit? When to stop? When to go all out?

Going into the auctions, DD had a fat purse. It's easy to blow money badly when you have so much of it. In the previous auction, DD had gone all out for Yuvraj Singh. This season, they stayed clear of the big names. Rahul Dravid and Paddy Upton were yet to be signed on but their wish list appeared to be sitting on the table.

After Rajasthan Royals, Dravid and Upton were busy putting together yet another "moneyball" team. Who were these guys? Exactly. Why was Kurun Nair (base price Rs 10 lakh) going for Rs 4 crore? Another DD brainfade? 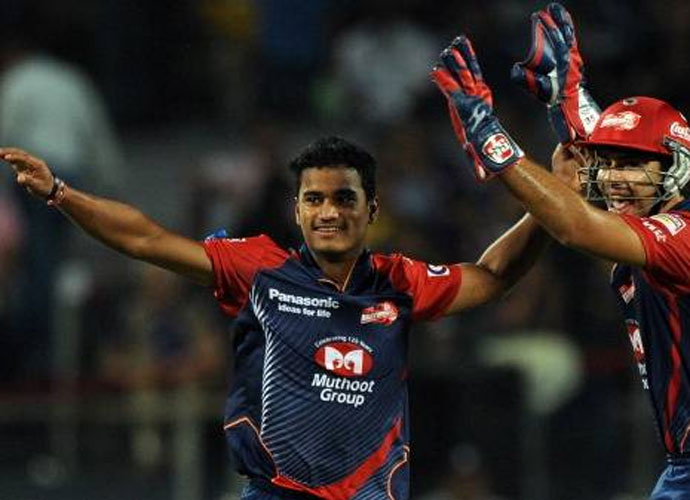 Why was the Daredevils gunning for an uncapped player like Pawan Negi (left)?

Nair is from Dravid's state, Karnataka, his batsmanship has been built on first class honours. He averages above 50. He shares his birthday with that other RR superstar, Ravindra Jadeja. Another December 6 born? Was Dravid looking at that too? What all does Dravid look at?

Against RCB, Nair added 134 runs with Quinton de Kock. He finished with a 54 not out. DD won their second match on the trot, chasing 191 down. DD doesn't chase down 191, what was happening?

Wasn't Pawan Negi Dhoni's boy at CSK? Why was DD gunning for him? That too against Dhoni's Pune? What had got into them? Rs 8.5 crore for an uncapped player? A lower order hitter and a part-time spinner at best? Rs 1.9 crore for U-19 wicketkeeper Rishabh Pant? Rs 7 crore for Chris Morris? Why wasn't DD going after famous international players? Why a faceless bunch?

And who's this guy called Carlos Brathwaite, why would you pay Rs 4.2 crore for a West Indian nobody has heard of? The IPL auctions were on February 6. By April 3, nobody had not heard of Carlos Brathwaite. And who he went to school with. On April 10, he hit his first ball in the IPL for a six. Into the Hooghly.

Quinton de Kock barely got a game last season. He's played all of DD's games this season. One fifty, one century, one not out, two wins. QdK is DD's biggest match winner with the bat. As an opener, and now a regular for SA in limited overs, he has ten ODI hundreds, half of them against India. Doubling up as a glovesman, he's a genuine all-rounder in the Gilchrist mode. He's also been the front for the franchise with the media, surely this is no coincidence?

In three matches, Amit Mishra is yet to bowl his full quota. Not even when he had 4/11 in three overs. Is there a science to that? Either way, it's still better than Mishra not being a regular in the team.

After the first match, Nathan Coulter-Nile hasn't played again. Last season's captain and top run scorer returned: Duminy is T20 T&T, just having him on the field ups the adrenaline. At some point he will bowl to left handers on the prowl. At some point, he could finish off a tight chase on a dodgy pitch.

Scores of 0, 3, 0, how long is the rope being handed to opener, Shreyas Iyer? He's a Mumbai kid, a FC average of 57, aT20 strike rate of 130, are they hoping his pedigree will finally pay off? What about Sanju Samson at three? When will get unstuck? Will he rekindle some of that RR magic?

Zaheer Khan as captain, had he not retired? After dropping a dolly in the second over against Punjab, the only champions he resembled were in the Masters Champions League. After the drop, it took a cosy assist to Karun Nair at the boundary to get the ball to the keeper. A run out happened. DD won. Zaks dismissed Gayle off his third ball, he owned him for two balls before that. Never mind he went for over 50 off his four overs, Zaks already appears to be DD's most successful skipper in a long, long time.

Already Dravid seems to have greyed a tad bit more, sitting in the DD dugout does that to you. Having Upton's thoughtfulness alongside will stem that greying somewhat. Having a plan, sticking to that plan no matter what, is not what DD does. That's what RD does. Who will win? DD or RD? Or both, together?

Can one man make the double Ds into the triple Ds - Dravid's Delhi Daredevils? Stay tuned.

#Delhi Daredevils, #Rahul Dravid, #IPL 9
The views and opinions expressed in this article are those of the authors and do not necessarily reflect the official policy or position of DailyO.in or the India Today Group. The writers are solely responsible for any claims arising out of the contents of this article.