IPL 9: With Dhoni's bizarre captaincy, Pune had to lose

The RPS captain sent even Ravichandran Ashwin to bat ahead of himself.

The name of the team was Rising Pune Supergiants (RPS) and its captain was none other than Mahendra Singh Dhoni - the man who had led India to many a memorable victory and made the erstwhile Chennai Super Kings (CSK) the most successful team in the Indian Premier League (IPL).

But in the IPL this year, the Pune franchise, making its debut didn't live up to its name - seldom rising, falling a lot more, and playing like dwarfs, hardly a "supergiant".

The Dhoni-led team lost a nail-biter against the Sunrisers Hyderabad (SRH) on Tuesday (May 10), going down by four runs at Visakhapatnam. Adam Zampa was the lone fighter for the RPS with 6-for-19, the second best figures in IPL history.

It really summarised the Pune team's plight in this tournament. What started on a high with a facile victory over defending champion Mumbai Indians in the tournament opener, soon turned out to be a nightmare. It lost four of their key foreign batsmen - Kevin Peitersen, Steve Smith, Mitchell Marsh and Faf Du Plessis, and forgot how to win.

With eight losses from 11 matches, Pune's chances in the tournament looks all but over now, and if it fails to qualify for the knockouts, it would be the first time that a Dhoni-led team will be failing to do so in the IPL.

Pune's woes have been compounded by a lacklustre show by its captain. Dhoni has been one of the most impactful performers in the IPL with the CSK. But he has been a pale shadow of his former self in this tournament, not scoring a lot of runs, and has been largely uninspiring with his captaincy. 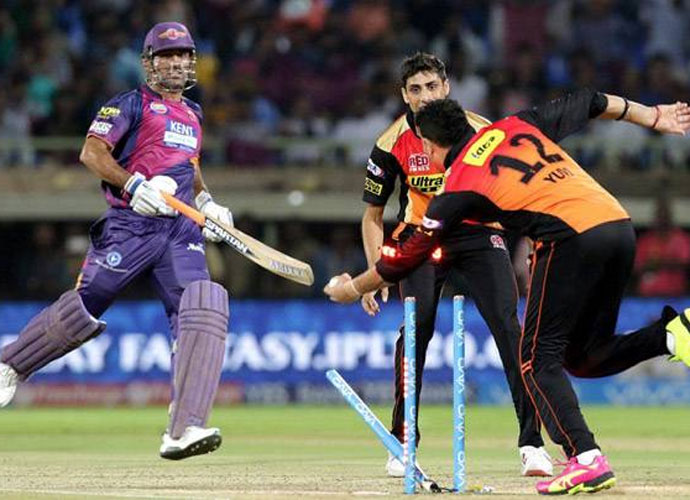 Dhoni caught short of his crease by SRH's Yuvraj Singh.

Perhaps one of the biggest mistakes Dhoni made in this tournament has been batting lower than he should. On Tuesday too, he came in at number six. That is too far down the order for one of the top batsmen of the side. Even Ravichandran Ashwin was sent ahead of Dhoni. Bizarre!

Granted that Ashwin has two Test centuries to his credit, but he is a bowler who can bat. The argument that he was sent in as a pinch-hitter really cuts no ice, for the counter-argument would be, who better to go after the bowling than Dhoni himself? Has Dhoni completely lost confidence in his own batting?

The running between the wickets that he prides himself on was not that great too, and he clearly looked jaded when he was run out by Yuvraj Singh.

Questions can also be raised on his team selection. When you have a more than capable all-rounder in Irfan Pathan in your team, what was the point of allowing him only one match? Certainly that's not the reason Irfan was bought by the franchise. That too for Rs 1 crore. More bizarre captaincy. Certainly as bizarre as his captaincy in the World T20 semi-final loss when he underused his strike bowler Ashwin and had Virat Kohli bowling the last over.

Cricket fans were expectedly not amused, and Dhoni was showered with brickbats. Here are some of the reactions:

@msdhoni believe me u r earning haters day by day...whts wrong pathan had done with u...#RPSvSRH

Yuvi ranout Dhoni.. ?? In Other Words, Dhoni's RPS are Out Of the Tournament! #RPSvSRH ?? pic.twitter.com/a2OHNppUMD

Dhoni has promoted Ashwin up the order. What is the role of the main batsmen of the team then.. like Dinda..

Dhoni has given R.Ashwin 4 over bowling and batting at No.4... Guess, next will be 50 cr dowry and beach facing property in Besant Nagar.

Dhoni sends Ashwin two down. Making up for not giving him to bowl this season. What is this? Gully cricket! #RPSvSRH

What happens to all those Ashwin overs Dhoni is saving? Some savings account is there for these purposes?

#MS Dhoni, #Rising Pune Supergiants, #IPL 9
The views and opinions expressed in this article are those of the authors and do not necessarily reflect the official policy or position of DailyO.in or the India Today Group. The writers are solely responsible for any claims arising out of the contents of this article.