IPL 9 shows Dhoni's days are over, Kohli is the new king

The RCB captain has led by example in this tournament. MSD has not been able to do likewise.

The ninth edition of the Indian Premier League (IPL) is almost a month since it started, and it has had its talking points. It had its share of controversy at the very outset, when celebrated commentator Harsha Bhogle was shunted out by the egoistic and authoritarian cricket bosses of the country (BCCI). More than anything it showed the dirty politics that has come to define the BCCI and indeed the IPL.

But from a purely cricketing perspective, two things have been amply clear, both loaded with significance:

1. Dhoni's star is on the wane: A team led by Mahendra Singh Dhoni struggling to stay afloat in the IPL is not what you would expect, would you? There was a time when the Dhoni-led Chennai Super Kings (CSK) used to be a hugely dominant force in the tournament.

The year 2011 was the high watermark for the CSK when Dhoni's side came from behind to win the title. It had started its campaign poorly, losing three of its first five matches, but then went on to win seven of its next eight matches, and beat the Royal Challengers Bangalore (RCB) twice in the knockout stages to win the tournament. Significantly, it was a time when the CSK (and Dhoni) was under the umbrella of BCCI strongman N Srinivasan (his company India Cements owned the CSK).

However, the team was suspended for two years on the recommendation of the Supreme Court-appointed Lodha panel probing match-fixing allegations. Srinivasan has also lost his position of pre-eminence in the BCCI.

Following fresh auctions, Dhoni's team was broken up. His one-time trusted lieutenant Suresh Raina was drafted into a different team, as was another of his favourites and an integral part of the CSK, Ravindra Jadeja. Furthermore, the livewire Dwayne Bravo, now the highest wicket taker in T20 cricket, also an important part of the erstwhile CSK, is not playing under Dhoni in this IPL. 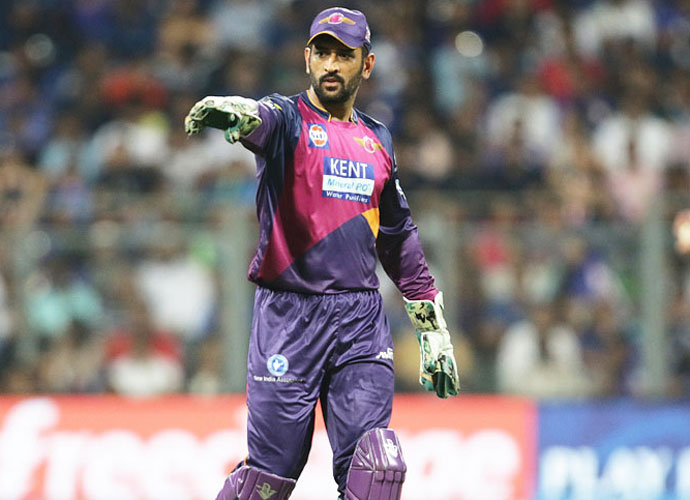 Dhoni has failed to create the same magic for Pune that he did with the CSK.

And now, "Captain Cool", who was a bit hot under the collar during India's World T20 campaign, has found himself in a spot of bother again with his new team Rising Pune Supergiants (RPS) floundering near the bottom of the table.

It has only three wins from nine matches in this year's IPL. Yes, the Pune franchise has been unlucky to lose four of its top foreign recruits - Kevin Peitersen, Steve Smith, Mitchell Marsh and Faf du Plessis - to injury, but all things considered, Dhoni has failed to create the same magic that he did with the CSK.

He has still not played that big innings for Pune. Perhaps he should consider pushing himself up the batting order, especially now that the team has lost some of its leading foreign batsmen.

Granted that he may not be having the team that CSK was, but he still has the services of players like Ajinkya Rahane, Ravichandran Ashwin, Ishant Sharma, Thisara Perera and George Bailey, among others. Pune's narrow win against Delhi on Thursday (May 5), one hopes, is the start to better things for Dhoni's team. It still has five matches remaining, but qualifying for the knockouts would be an uphill task.

Dhoni's captaincy for India during the World T20 semi-final loss to the West Indies was questioned even by former India opener Virender Sehwag, and now he has had a less-than-flattering IPL campaign. Can Dhoni inspire a magnificent turnaround by his team? He has not done much in this IPL so far. If Pune is to qualify for the knockouts, it would take something special. Dhoni could be the man to deliver that. But would he be able to? It looks difficult, given that the man who once had the Midas touch is long past his heydays.

Sadly, Kohli, in spite his roaring form, has not been able to lift the RCB, which is languishing currently at the seventh place in the eight-team competition, having lost five of its seven matches. A big reason for the RCB's shoddy show in the IPL has been that Chris Gayle - perhaps the most dominant player in T20 history ever - has just not warmed up to the occasion. Scores of 1, 0 and 7 is totally unbecoming of the marauder from the Caribbean. Kohli has carried his rich vein of batting form that he displayed in the World T20 into the IPL.

It is largely because of Kohli and AB de Villiers' brilliance that RCB has been scoring 180 pretty consistently, only to throw it all away, owing to some below-average bowling.

However, the biggest gain for the RCB, and indeed Indian cricket, has been Kohli's batting. This IPL also shows that Kohli, howsoever good he is individually, can't ensure that the team also does well, if that team chooses to stay dormant. Kohli all by himself can't assure you victory. A lesson for Team India perhaps, given that Kohli has often been seen as fighting alone in the blue jersey as well.

But what is beyond doubt is that he is fast reaching pole position in Indian cricket, a position that Dhoni has been occupying for a number of years. This year's IPL has been a reminder that a change of guard is not far away.

#Virat Kohli, #MS Dhoni, #IPL 9
The views and opinions expressed in this article are those of the authors and do not necessarily reflect the official policy or position of DailyO.in or the India Today Group. The writers are solely responsible for any claims arising out of the contents of this article.