Is Shikhar Dhawan's injury a blessing in disguise for India’s World Cup campaign?

Injuries will happen through the World Cup. But a champion side should approach it with the mindset of a marathon runner rather than the brilliance of a sprinter.

Cricket connoisseurs know that a single ball can change the course of a match.

It can also alter the fate of a player’s life and many, from Nari Contractor to Mark Boucher, have been unfortunate victims of the same. Similarly, a single delivery has compelled India’s star opener, Shikhar Dhawan, to temporarily exit centre-stage from the 2019 Cricket World Cup.

What makes this enforced absence ultra 'painful’ is the fact that Dhawan had just scored a sparkling century against Australia and looked set to be the mainstay of Indian batting this English summer. Despite being struck quite early on the thumb by Pat Cummins, his aggressive 117 exemplified not just Dhawan’s grit and class, but also his special value to India’s batting unit. As one of the pillars of the Indian ODI team, how deeply Dhawan’s rest on the sidelines impacts India’s chances to lift the coveted cup is now the big buzz in cricketing circles.

But what most see as a disaster may just turn out to be a blessing in disguise for India in its quest for glory.

Dhawan’s absence is undoubtedly a huge loss and denies India the advantage of the left hand-right hand combination (of Dhawan and Rohit Sharma) that has been the nightmare of bowling attacks across the world. But, as the adage goes, there's a silver lining along every dark cloud — this challenge may well turn out to be a great opportunity to test the bench strength of India’s untried middle order. With two smooth wins in its opening games, it’s a moment where India can afford to experiment with a new line-up before the business end of the tournament gets underway. 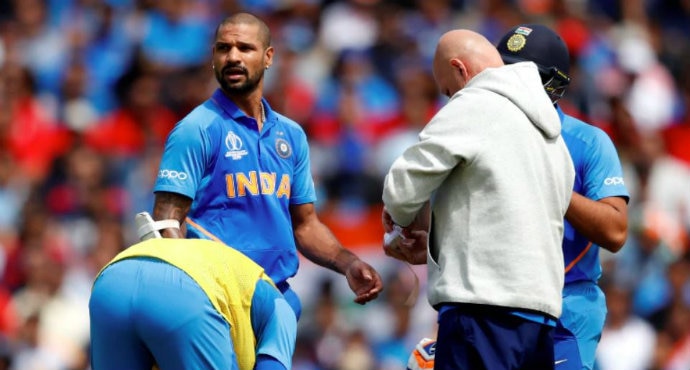 Keep a Plan B. And C. And D: Dhawan's injury highlights the need for teams to be flexible, and not just rely on star players. (Photo: Reuters)

KL Rahul is expected to open the innings and his brief stint at No. 4 would surely have added a new dimension to his thinking as a batsman. He has always been a dashing and exciting batsman to watch — but looks impatient to play too many shots at times. After learning to step in and just build a partnership, instead of being the dominant partner against South Africa, he would have understood the virtue of patience in the middle overs.

This makes him more dangerous as he can now build up for big knocks after negotiating the pace initially.

While most would vote for Rahul to take the opener’s position, it may not be a bad idea for the team management to even try out Dinesh Karthik at the top of the order — he is a quality player of seam and swing, and even a cursory glance at Karthik’s record reveals that he is a top-class utility player with a stable mind and nerves to serve India’s cause. Since both New Zealand and Pakistan have good pacers, it may be a great time to push for a new opening pair without disturbing Rahul, who seems to be enjoying his stint at number four.

Whose No. 4 is it anyway? If Rahul takes Dhawan's spot, Karthik or Shankar could be considered. (Photo: Reuters)

However, if the team management decides to go with Rahul as the new opener (as seems likely), India will need to find a suitable No. 4 — it would then be a toss-up between Karthik and all-rounder, Vijay Shankar, for this crucial spot.

If Karthik has experience and proven prowess as a batsman, Shanker has all-rounder abilities. Besides being a technically sound batsman, Shanker has the composure to rotate strike in the middle overs — a critical factor in ODIs, he also has the big shots to accelerate runs when needed. A fine example of this was his knock in India’s ODI against Australia in Nagpur a few months ago when batting at No. 5, Shankar scored a fighting 46 off 41 and helped captain Virat Kohli build a sizeable total, despite a terrible collapse at the start.

In addition, Shanker is more than handy as a medium-pacer and a brilliant fielder — his inclusion in the playing XI strengthens Indian bowling and gives Indian fielding a sharper edge. Shanker’s presence as an all-rounder would also pose a challenge to Kedar Jadhav, forcing him to pull up his socks — and all this will only augment the team’s overall strength.

If neither Karthik, nor Shanker inspires confidence, Mahendra Singh Dhoni could get the No. 4 spot — especially if the team loses early wickets. His cool and calm approach can absorb the pressure and lay the foundation for strikers like Hardik Pandya to play their natural game in the latter half of the innings. It’s worth remembering that last winter in Australia, Dhoni had scored a match-winning 87 not out in the third ODI — while batting at No. 4! In two other matches on that trip, Dhoni had scored half-centuries while batting at No. 5 and the former captain has often come good in matches after the openers have fallen early. If the middle order is tweaked in Dhawan’s absence, Dhoni’s batting could be crucial to continue India’s winning momentum. So, why not him? Dhoni is capable of absorbing pressure and laying the foundation for strikers — which India could benefit from. (Photo: Reuters)

While all these permutations and combinations are worked out, what happens if Dhawan’s injury does not heal quickly and he’s totally ruled out of the World Cup?

In that case, India will still have enough time and matches to allow Rahul to get used to the fire and fury of pace bowling in English conditions. Also, the team could induct the aggressive southpaw, Rishabh Pant, who is being flown to England to acclimatise with conditions there and be a ready cover in case Shikhar is unable to play any further part in this World Cup.

Dhawan’s injury exposes the constant fragility of players — it also highlights the need for teams to be flexible in their approach and refrain from relying on just a bunch of star players. Players on the Indian bench will now have to step up and play key roles. As different players are tested out in the league stage, several options will be tried that may otherwise not have been explored — the team gains in an overall sense.

In a long tournament like the World Cup, injuries are a threat that all teams have to cope with and a champion side may well be the one which reflects the focus and fitness of a marathon runner to stay the course, rather than the brilliance of a sprinter. Given the Dhawan crisis, India will have to get its bench strength on their toes and in playing fitness — and these may be key positives that prepare India better for the final stages of the tournament.

Taking a philosophical view, Shikhar has tweeted a famous couplet by Urdu poet Rahat Indori, where he claims that, “It's not our wings but our determination that gives us flight.”

Dhawan’s tweet reflects that his spirit remains high and if the rest of the team imbibes the same fighting spirit, Virat’s warriors — despite Shikhar’s injury scare — could well propel India to World Cup glory.

#Dinesh Karthik, #Kl rahul, #MS Dhoni, #World cup match today
The views and opinions expressed in this article are those of the authors and do not necessarily reflect the official policy or position of DailyO.in or the India Today Group. The writers are solely responsible for any claims arising out of the contents of this article.

Author is a professor of journalism. He currently heads the Department of Mass Communication at the University of Rajasthan. He is a veteran journalist, an acute observer of politics and worked as Resident Editor for Star News and NDTV in Rajasthan for nearly two decades.