Golf is so inherently unpredictable in nature that cricket’s famous maxim of 'glorious uncertainties' appears almost an apology.

Due to unfolding of an unprecedented build-up, more than just history was riding on this year’s Ryder Cup (RC). Additionally, last week’s sad demise of "King" Arnold Palmer - Arnie - (from the famous trio of Jack Nicklaus and Gary Player like the fab-four of tennis today) will cast a continous shadow over proceedings and surely stir golden memories of his exploits.

I can already visualise the solemnity and moist eyes on the first tee and amongst galleries reliving, re-enacting the deafening roars of Arnie’s army, when the US team is leading and winning. This atmosphere alone is likely to define this year at Hazeltine.

On one hand, you have the European team comprising of a rainbow of countries (only UK and Ireland represented Europe till 1979) brought together, though separated geographically, linguistically and culturally, yet sharing similarities through shared history

Then you have the US team, though technically a single nationality, yet representing different ethnicities which make America the melting pot of  many nationalities. It also shares its history with the European continent – original home of the most.

Thus, despite the apparent rivalries, the RC brings long-separated brothers together symbolising the unconscious wish to connect - an umbilical cord-like link.

I still remember, as a kid, the euphoric countrywide celebration when India beat England to win a series first time in that country in 1971. Ajit Wadekar, till today, is feted for that achievement.

Similarly, the consecutive "whitewash" of England by the West Indies, in 1984 and '85-86, was celebrated by Caribbean nations as if history was being corrected and revenge taken.

Such countries should thank the forefathers for formulating these contests as they bring people together and old connections are renewed. The world would have been poorer without these connections.

Golf is so intrinsically and inherently unpredictable in nature that cricket’s famous maxim of "glorious uncertainties" appears almost an apology; its turn and twists are unmatched - instances abound about many come-from-behind victories, but it is the famous collapses that continue to linger in public memory, casting ghosts like shadows on players.

And the moment a player thinks that he/she has cracked the game's mechanical or mental code, the next moment they are brought to their knees. 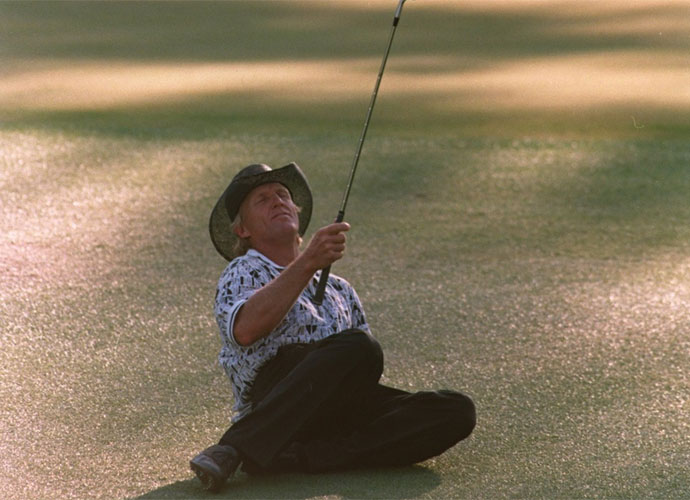 Australia's Greg Norman looks down after missing a putt in the final round of the 1996 Masters.

Ask "Shark" Greg Norman about losing the 1996 Masters to Nick Faldo after having lead of six strokes, or Rory Mcllroy for frittering away a four-stroke lead on final day at the 2011 Masters, or Jean van de Velde for squandering a three-stroke lead on final tee in the 1999 British Open, with one hand literally on the Claret Jug only to lose in a single hole and show the world what golf can do even after playing brilliantly for 71 holes, and achieving infamy (for snatching defeat from jaws of victory) and fame (illustrative case to be taught by gurus of golf).

Ryder Cup (since inception in 1927) has seen oscillation in domination. For first few decades, it was dominated by Great Britain and then by US from '60s onwards. So much so that in 1979 on advice of Jack Nicklaus to improve competitiveness and intensity, the European team (earlier represented by Great B and Ireland only) included players from other European countries, and entry of players like Seve Ballesteros brought flamboyance and crowds to contests.

This widened the talent pool and made Ryder Cup what it is today, so much so that now Europe has won eight out the last ten contests.

Ryder, like Davis Cup, shows how nationalistic spirit can fuel a player to demonstrate extraordinary prowess and perform superhuman feats in complete contradiction to prediction or world rankings.

We have our very own Leander Paes symbolising many superhuman achievements in vanquishing higher-ranked players in the Davis Cup, or when individual players singlehandedly win Davis Cup for their countries, like Andy Murray did in 2015 or when he again won the gold medal in this year’s Rio Olympics.

This nationalistic fervour can be seen in players like Ian Poulter, who has rarely come close to winning Majors but has an enviable record at RC; similar statement can’t be made about Tiger Woods who, despite being world number one for most part of a decade, doesn’t have an impressive record in RC.

Then the question is whether playing for one's country brings out the best, especially when backed by a team of talented mates, making up for deficiency in self-belief. The answer is both yes and no if we look at past performances.

The build-up to the actual event is phenomenal, including this year, and for three days the world would be either glued to their TV screens, or cross club gates to become galleries, craning necks and straining bodies to witness the ever-changing excitement, drama and ephemeral euphoria evaporating every minute and where dramatis personae can emerge unexpectedly.

Where, a shot or putt that creates frenzied celebrations from one player (Jose Maria Olazabal’s victory dance in 1987 that was labelled unsporty, or fist-pumping by Poulter, or jumping into lake by McGinley in 2002) or entire team celebrating the victory on the final hole (mostly) or even when the game is unfinished (Justin Leonard’s over 45 feet putt on the 17th hole during the famous Battle of Brookline in 1999 that led to hysterical invasion by the US teammates and wives - unthinkable on usual tour).

Sinking long putts are part of turns and twists of the game - remember over 40 feet putt of Tony Jacklin on 18th green in 1969 while playing against Jack Nicklaus that put reverse pressure on Jack to putt a short one which he did. But, while retrieving the ball, he took a small step to pick Jacklin’s marker to concede, and that became an ultimate symbol of sportsmanship.

This famous "concession" halved the match but the US still won the cup as it had held the cup coming into the contest. Peeved US captain Sam Snead kneaded and furrowed his eyebrows into a frown, stating that the match was meant to be won.

Nicklaus' concession is famous as one can’t and doesn’t concede even a one foot putt in stroke play format played on professional tour.

In contrast, in RC, not conceding a small putt of few feet can be a strategy to arouse animus and unnerve the player enough to miss the putt.

Ironically, the concession is remembered as one of the greatest gestures of sportsmanship when Nicklaus stated later that he didn’t want Jacklin to miss in front of his home crowd. The image of both Nicklaus and Jacklin putting arms across each other’s shoulders and walking to the club house became an iconic image that defines golf’s greatness as a game.

This throwing of arms across adversary’s shoulders is an ultimate declaratory silent statement of forging a lifelong brotherly bond and a ceaseless camaraderie. A similar image was witnessed after Tom Watson vanquished Nicklaus on 18th hole during their famed  "Duel in the Sun" at the British Open in 1977.

History remembers such incidents of sportsmanship more than the event or eventual winner: Take an incident of a fortnight ago wherein during the triathlon in Mexico, an elder brother, on the cusp of crossing the victory line stopped, surrendering his lead to pick his disoriented and collapsing younger brother (Brownlee brothers), lending shoulders to fling him across the finish line, before him, enabling him to take the silver and then an ambulance.

Meanwhile, another athlete had crossed the line to claim gold. But for this selfless act, the world wouldn’t have known the event or the name of both brothers.

#Golf
The views and opinions expressed in this article are those of the authors and do not necessarily reflect the official policy or position of DailyO.in or the India Today Group. The writers are solely responsible for any claims arising out of the contents of this article.