That the PM is serious about India producing more champions, one can expect more professionalism from federations.

It's heartening to note Prime Minister Narendra Modi has decided to set up a special task force to prepare an action plan for the next three Olympics - 2020 to 2028.

A week has elapsed since the closing ceremony of the Rio Olympics. Silver medallist PV Sindhu and bronze medallist Sakshi Malik have returned to rousing welcome ceremonies, though bites from a top politician on P Gopichand have been jarring.

At the same time, those pounding their chests and crying for India to do better in the Olympics need to understand that we were never a nation which produced world beaters.

Sports federations have set up review committees with the National Rifle Association of India (NRAI) first off the blocks. More will follow suit.

In the past too, post mortems were conducted. Former sports stars sat on judgment and various corrective measures were prescribed. In the case of India hockey, after the 2010 London Olympics 12th-place finish, there was soul searching and the team has finished eighth this time.

People are still not satisfied with it but the consensus is we need a good foreign coach and Roelant Oltmans has done his bit for India.

The same applies for several other sports where the services of foreign coaches have been utilised, though it's about time their roles and contribution are analysed.

Negativity and sports don't go together. PM Modi has done the best possible thing for sports by announcing at a meeting of the council of ministers that the NDA government is fully behind India's sportsperson who compete in the Olympics.

In the last one week, there have been all types of articles on India's performance in Rio and what all can be done for improvement.

All this is immature talk as minus government support in this country, athletes from a huge number of disciplines will be starved of funds for training and exposure. 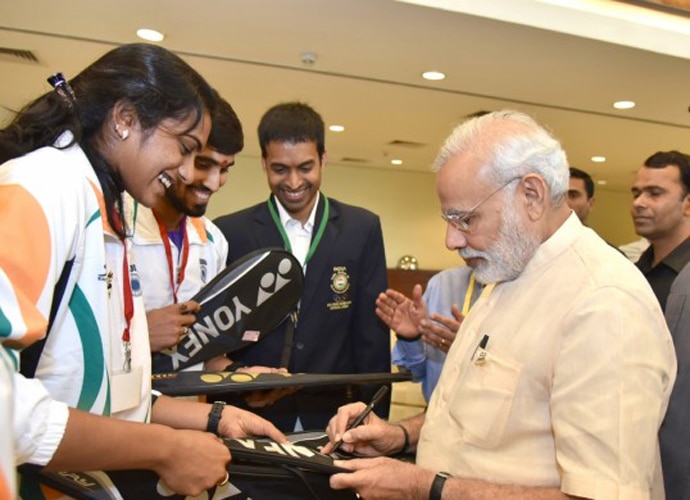 There are many number of private groups who are claiming to be messiahs of sports in the country.

For every private body from the corporate sector which is "supporting" elite athletes, there is a much larger contribution from the Indian government.

Comparisons are being made with Great Britain as to how India can produce more champions and more money needs to be spent.

Britain has a national lottery system for sports, which cannot be imagined in India.

All this is not going to happen overnight. Modi has said the task force for the next three Olympics will prepare overall strategy for sports facility, training, selection procedure and other related matters.

There will be in-house experts and people from outside, said the message from Modi.

So, what has prompted the prime minister to take such swift action?

People may think celebrities like Sachin Tendulkar have openly asked the prime minister to support Indian sports and he has reacted.

No, that is not the entire reason. Modi has often spoken about the size of the youth population in the country.

And when the youth population is huge, it means there is talent to be tapped and champions can be produced.

None in India before this talked of preparing athletes for three Olympics.

There is a message to national sports federations as well because "selection procedures" and related matters will also come under the task force.

Had it been some kind of an order from the sports ministry, the sports federations may have reacted by saying this is an attack on their autonomy.

Now that the prime minister is serious about India producing more Olympic champions, one can expect more professionalism from sports federations.

It is well known that when it comes to selection matters, be it picking athletes or even coaches, there has been severe manipulation.

Take archery, wrestling and many other sports, federations have played politics and favourites have been put on board.

In some sports, we have no next line of players and Leander Paes, at 43, is still taken to the Rio Olympics where he makes an appearance like a tourist. He turned up a day before the opening ceremony.

This government is not going to see India placed 67th in the medal tally.

It expects something much better and is ready to back the athletes.

Preparation for the Olympics does not start a year before the Games. The Asian Games, Commonwealth Games and world championships in several disciplines need to be factored in. All these events fit perfectly well in the Olympic cycle.

But there is much more to be done than just the government backing elite Indian athletes.

The support for talent at the grassroots is pathetic and sports at school and college is at rock bottom.

For sports to improve, it has to be meshed with the academic curriculum. The youth needs to be encouraged to play sports.

All this can be done only if the government is serious and pushes education institutions to give sport a place of importance.

That, too, needs to be underlined by the task force.

#Narendra Modi, #Olympics Task Force
The views and opinions expressed in this article are those of the authors and do not necessarily reflect the official policy or position of DailyO.in or the India Today Group. The writers are solely responsible for any claims arising out of the contents of this article.