How Rahul Dravid can save Indian cricket

His understanding of the game, from grassroots to institutions can stop India's cricketing bomb from ticking.

Making it to Siri Fort's walking track before sundown has its perks, not least the acid greens bathing in a golden sun, with cricket whites strewn across the field. On a good day, there's a match on, and these cricket whites are a well balanced punctuation.

On other days, there are the three cricket nets, and the catching practice drills close by. Reason enough to shorten my walk path and encircle the cricket field instead of going past the football grounds as well. On one such walk, I decided to peek into the goings-on at the nets.

There were kids, no more than seven-eight, trying their darndest to drag the ball to the other end, with little success. The ball ended up wide either side of the wicket. Often it pitched a few times before it rolled ankle-high to the other end. 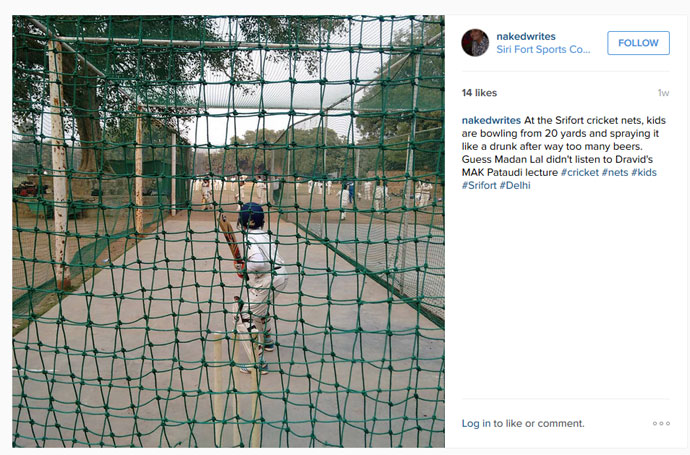 Rahul Dravid's MAK Pataudi lecture was still fresh in my mind. He had spoken of how kids started off bowling the full 22 yards, and because it wasn't easy to get the ball across that challenging distance, they altered their bowling actions. These altered bowling actions went unchecked by their junior coaches. Why would they? Their wards were delivering results, and continued to do so with these faulty actions.

Before you know it, some of these kids were playing under-15 and under-19 cricket. This is when their bowling actions came under scrutiny; they were called for chucking. For years, these kids had bowled like this but now they had to go back and change everything. How easy could that be?

I asked the coach manning the action whether the length of the wicket was a full 22 yards - he answered in the affirmative. Close by, Madan Lal overruled, saying it was 20 yards. It still seemed way too long.

I asked the coach if he had seen Dravid's MAK Pataudi lecture - he seemed clueless with a big WTF on his face.

Madan Lal is a World Cup winner from 1983. He's also in-charge of the cricket academy at Siri Fort. Rahul Dravid never won a World Cup. He was the captain during India's first round exit in 2007. I have little memory of Madan Lal saying much, as for Dravid's Pataudi lecture, that one streaming on bcci.tv is nowhere enough.

It must be played and replayed in every cricket academy across the nation, possibly across the cricketing world.

It lacked airy fairy headline grabbing quotes. It was the real deal, littered with priceless details, pretty much a road map to rejuvenate cricket, who knows, even save cricket from its own devils. BCCI's tough boys should ensure his recommendations are forced down the throat of these academies.

These academies have a role far greater than entertaining a parent's passing fads from cricket to football to karate. As Dravid emphasised, cricket is up against football like never before in India.

Largely because of the way cricket has been taught (cashing in on the 2007 and 2011 World Cup wins, lures of the Indian Premier League (IPL) ) it has entertained way too many parents who shoehorn their kids into the sport for the wrong reasons or worse still, for no reason whatsoever - "Areh, Mrs Varmani's son is going to cricket, my son will go also, haan"

It's unlikely Rahul Dravid took to cricket to mint money or become a star. Even today, as throughout his career, it's an uncommon understanding of the nuances of cricket, from the grassroots to the institutions and their running that make Dravid tick.

And to stop India's cricketing bomb from ticking, this man must be allowed far greater challenges.

Under-19 coach is a start. Leave the BCCI's cricket advisory committee to Tendulkar, Ganguly and Laxman. They can take care of the smiles and the occasional lip service to Indian cricket.

To make Indian cricket rock steady, you need a man ready to get his hands dirty in the nets. Who better than a gentleman to save the game?

#Cricket, #BCCI, #Indian Cricket, #Rahul Dravid
The views and opinions expressed in this article are those of the authors and do not necessarily reflect the official policy or position of DailyO.in or the India Today Group. The writers are solely responsible for any claims arising out of the contents of this article.