Ramachandra Guha has shown the mirror to Indian cricket

The eminent historian has exposed how the gentleman's game is hogged by superstar culture.

One is not sure how Team India skipper Virat Kohli and his famed batting line-up will find their timing against Pakistan in the ICC Champions Trophy opener on Sunday, but noted historian Ramachandra Guha already has. As the outgoing member of the CoA — Committee of Administrators — Guha has done what none could do before for Indian cricket.

By calling a spade a spade and hitting out at the “Superstar Culture” in Indian cricket, Guha has not only slammed former greats of cricket but also castigated the CoA for being in a state of inertia and not doing anything constructive.

The last few weeks in Indian cricket have been one of turmoil. Nothing "sensational" happened in the Indian Premier League, but once the Indian team flew out of India, all kinds of rumours have been floating around about the friction between Virat Kohli and coach Anil Kumble.

On Saturday, Kohli dismissed reports of his rift with Kumble as “speculations” and that the team is focused on playing cricket. Reports coming in from England suggest the two are going about their job of preparing for the Champions Trophy in right earnest.

One would have thought in a surcharged atmosphere, when India play Pakistan and hardliners question why we play any sport with a rogue nation, the mood at home would be one of optimism. There have been more than skirmishes in the Kashmir Valley and it needed an Indian win against Pakistan to fire up the patriotic fervour even further.

However, Guha’s email to CoA boss Vinod Rai has kind of taken the focus away from such a huge contest as the average cricket fan is now well aware of how superstars in the game have been having a ball. To be sure, Guha has analysed the scenario beautifully, the way only he could have. 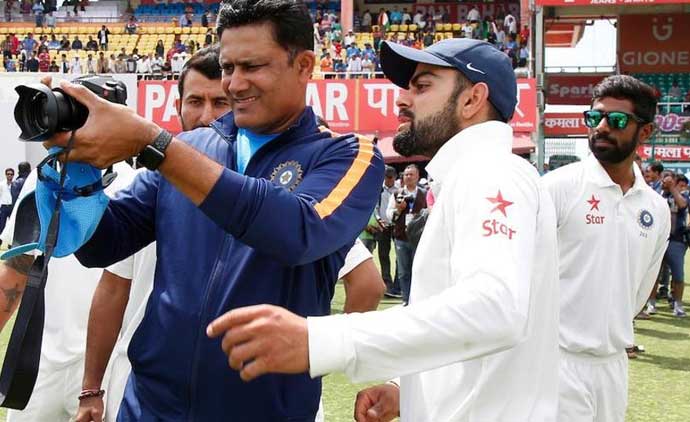 A number of people were critical of Ram Guha as he had not attended meetings of the CoA. Perhaps, he had understood the body was not really interested in doing the work it was entrusted with and was instead focusing on issues which should have been dealt with by the Indian cricket board (BCCI) officials.

So, was Guha’s timing perfect?

I would think so, as submitting his resignation to the Supreme Court could have been easily misconstrued. A lot many think Guha is close to Kumble and he is extremely unhappy the way the coach conundrum has been handled by the BCCI. Just as an artist uses his brush and paint to bring life to a canvas, Guha has portrayed the superstars in Indian cricket — past and present — in a classic way.

In a country where people call Sachin Tendulkar “God” and other stars are seen as beyond criticism, Guha has exposed each one with a touch of class. It’s not like pure vitriol, but a man who was so nuanced in writing his letter to Vinod Rai, did not have any hesitation in calling a spade a spade.

Conflict of interest is nothing new in Indian sport. Yet, when it came to cricket, so many people were getting away. Deep down, each superstar which Guha has mentioned was only interested in his own brand building, linked with commercial interest.

To point a finger at Sunil Gavaskar, Sourav Ganguly, Rahul Dravid or Anil Kumble would have been blasphemy. Guha did it with conviction and has backed his words with a proper analysis and how conflict of interest has been overlooked repeatedly.

Last week, I had written about the CoA not doing its job and cleansing the state cricket associations had not even begun. Guha has pointed out the inactions of the CoA and how valuable time has been wasted. There is no way you can ask Guha to take his resignation back, just as Anil Kumble is “supposed” to have made up his mind not to seek a fresh contract as coach of Team India.

Sport has a strange way of dealing with realities. If India defeat Pakistan in Sunday’s gut-wrencher, actual cricket will be back in focus. Should there be a reverse, you can well expect tons of criticism. The TV experts who Guha has slammed will give their own gyaan, and lace it with patriotism.

Irrespective of what happens in Sunday’s match and what shape India’s campaign takes place in the Champions Trophy, points which Guha has raised should not be forgotten. There are several issues he has raised and each one points to a deep rooted malaise in the system.

As a body appointed by the Supreme Court, the CoA has huge, unfinished business. Guha has reminded the nation of chaos that prevails in the Indian cricket system.

Also read: BCCI got a well-deserved slap in Dubai

Post your comment
#Cricket, #Ramchandra Guha
The views and opinions expressed in this article are those of the authors and do not necessarily reflect the official policy or position of DailyO.in or the India Today Group. The writers are solely responsible for any claims arising out of the contents of this article.