Great expectations by Kohli and Shastri

To be translated by their darling boy, Rohit?

"Rohit Sharma is a class player, it's just a case of him smelling the coffee and then we know what he can do."

Rohit Sharma has been blessed with Ravi Shastri and Virat Kohli. Their belief in him probably surpasses his belief in himself. Each new lease of life that Rohit's Test career receives seems to have a new angle to it. Rohit is now packaged as can-take-the-game-away-from-the opposition-at-No 3 wala Rohit. "Of course he will have to be patient to start with," Shastri will add, hedging his bets, as if by saying all this, Rohit will restrain himself. It appears to Shastri and Kohli that they have the controls, the joysticks, and Rohit is this highly intuitive video game, just waiting to do their bidding. "Leave ball, Rohit!" Rohit will leave ball. "Smash for six!!" Rohit smashes for six. "Through the covers". And Rohit on the front foot will dutifully drive.

In November 2013, Rohit blasted two Test centuries during Tendulkar's farewell series against an Invitation XI from the West Indies. Following those home Tests, Rohit has toured South Africa, New Zealand, England and Australia and Bangladesh. In these 16 innings, he's accumulated two half centuries and seven single-digit scores - three ducks and four times simply 6. Will Rohit get as many chances to fail and then succeed in Tests as he did in the shorter format? Will he continue to be given a rope longer than most?

In the warm-up match against the Sri Lanka Board President's XI, Rohit batted at three in the first innings, making 7. His supposed competitor for that spot, Cheteshwar Pujara, came in much lower at six, made 42. In the second innings, Rohit was made to open, he scored 8. Pujara's long vigil from 28/3 to 112 ended when he was retired at 31. It now appears to be a foregone conclusion that the No 3 slot is for Rohit, and India will go in with five batsmen plus the wicketkeeper, Saha.

Both Rohit and Pujara played three Tests down under scoring 173 and 201 runs respectively. What appears to have been an ordinary series for Pujara, seems to be the start of something big for Rohit. He was retained as India's number three for the lone Bangladesh Test.

As the new Test captain, Kohli has repeatedly emphasised the need to score quickly. In Rohit, who strikes at 51.62 in Tests and Kohli at 53.13 (compared to Pujara's 49.25) is the new attacking India. While they're at it, why not pick Raina too - he strikes at 53.14. All these bloated perceptions are often based on the players' ODI and IPL records - seldom do they have much bearing on how a player transplants to Test cricket. Few would know that before Pujara's lean patch in England and Australia, he had a much better Test strike rate than both Kohli and Rohit.

Shastri has harped on about an aggressive brand of Test cricket, about not being afraid to lose Tests in order to win them - about taking 20 wickets. So in all possibility, India will look to field five bowlers. It gets tricky though. India's Mr Patience, Murali Vijay, is out with injury - the five other batsmen all play a similar brand of cricket, more hit ball than leave ball or block ball. And while Ravi Shastri attributes England's Ashes' success to five bowlers, he will do well to notice the impatience in Australia's batting. But for Chris Rogers, the Aussies have batted like Test cricket had gone out of fashion and they had a T20 league to catch.

"I think what he definitely brings at No 3 is the flair factor. With the kind of cricket that this team is looking to play, wherein we are wanting to at least go past 300 on each batting day, that's where somebody of his (Rohit) calibre can chip in and contribute in that manner."

Bangar even went to the extent of saying that Rohit is batting well in the nets. Déjà vu all over again. Gautam Gambhir said something like that three year's ago and I made this cartoon. 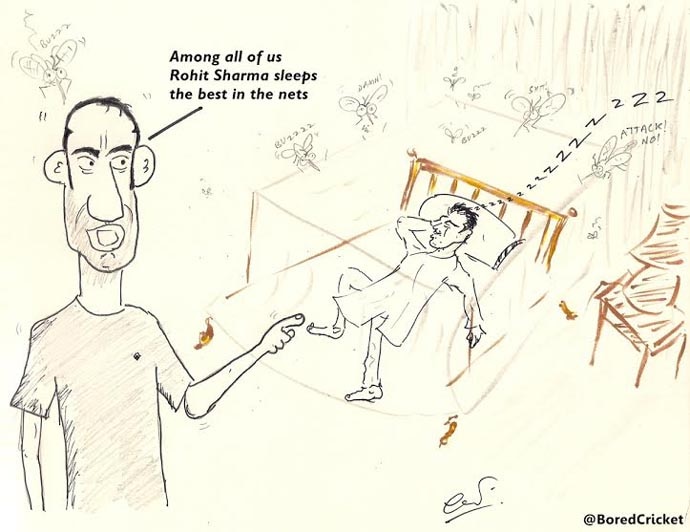 C'mon Rohit, do something, shut us all up, we're all in such a terrible loop. But if you don't care for coffee, kindly tell the spin doctor to stop ordering it.

#Virat Kohli, #Ravi Shastri, #India vs sri lanka
The views and opinions expressed in this article are those of the authors and do not necessarily reflect the official policy or position of DailyO.in or the India Today Group. The writers are solely responsible for any claims arising out of the contents of this article.