Questions will now be raised on India's line-up and why they were not able to achieve a modest total of 239.

He came, he saw, he conquered! Sadly for India, Ravindra Jadeja could only win the hearts of millions of cricket fans and not the game against New Zealand.

He batted incredibly, bowled intelligently, fielded brilliantly and yet ended up on the losing side.

Table toppers in the round robin stage, India were keen to enter their fourth World Cup final, millions were praying overtime for Team India to lift the World Cup but at the end of the day, its New Zealand who have marched into their second consecutive title clash. Credit needs to be given to New Zealand as they could ably defend a modest total. (Photo: Reuters)

In a stunning turnaround, New Zealand defended their modest total of 239 on the second day of their rain-affected clash. After the Kiwis added 28 runs to their overnight score from 23 balls, they set up a target that India would normally be confident of chasing down easily.

But the fiery pacers from New Zealand had other ideas.

In the space of the first 19 balls, they skittled India’s top three, including the Cup’s top scorer, Rohit Sharma, skipper Virat Kohli and KL Rahul all dismissed for just one run each. Kiwi pacers, Matt Henry and Trent Boult had virtually delivered a knock out punch.

As Henry picked his third wicket, Dinesh Karthik falling to a brilliant catch by Jimmy Neesham, India was reeling at 24 for 4 by the 10th over. Surprisingly, Hardik Pandya was sent ahead of Mahendra Singh Dhoni.

The Pant-Pandya duo put on a slow but steady 47 run partnership. But after a brief recovery, Pant, displaying his immaturity, went for a hoick against the only Kiwi spinner Mitchell Santner and was caught at deep midwicket. A little later, Hardik repeated the mistake sending India into deeper trouble. 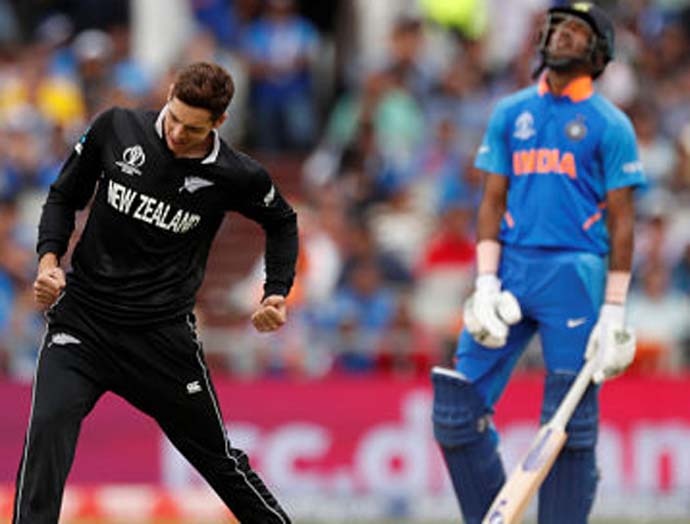 Rishabh Pant and Hardik Pandya got involved in a good partnership but got out to immature shots. (Photo: Reuters)

Virat’s warriors were now tottering at 92 for 6 when the last hope for India walked in.

Ravindra Jadeja is a humble man who often comes across as shy off the field.

But this time when he entered the field, there was a steely intensity in his eyes and a sense of purpose.

He joined Dhoni, for his first knock of the World Cup. And what a knock it turned out to be! Batting aggressively, Jadeja took the attack to the opposition the way he stepped out to Neesham for a glorious straight six and two towering sixes against Santner signified his bold and brave approach. With Dhoni playing his cool, calculating game, the Kiwis were suddenly put under pressure for the first time in the innings. Ravindra Jadeja came out with an aggressive intent and tested the New Zealand bowlers. (Photo: AP)

Where everyone from either side struggled on the slow Manchester pitch, Jadeja, it seemed, was batting on a different wicket. His hitting was clean, his defence compact and the running between the wickets electric as usual.

As he put together a fighting century partnership with Dhoni, Indian fans began hoping big again. The two took India past the 200 mark. The counter-offensive was now on the verge of taking India into the final that earlier looked well beyond their reach.

But just when the game seemed to be in their grasp, Jadeja miscued one and was caught at covers by Kane Williamson. 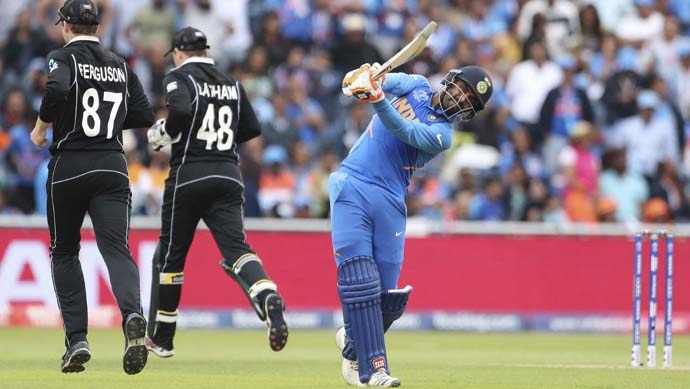 The sensational knock of 77 in 59 balls had brought India to the doorstep of an improbable win. But soon, Indian dreams were shattered as Dhoni, one of the finest runners between the wickets, was run out to a direct throw from Martin Guptill.

The game and the tournament were truly over for India!

Before the World Cup, Vijay Shankar was called a ‘3-D’ player and selected on the basis of his skills in all three departments of the game. Till he got injured, Shankar never really fulfilled that potential but the unsung Jadeja surely did.

He played just two matches in the entire championship but clearly reminded everyone about his abilities as an all-rounder that have served India for several years though he is often under-estimated and disregarded even by former cricketers. Against New Zealand, however, Jadeja’s swivelling sword cut all those belittling his talent into ‘bits and pieces’. Before his batting blitz, he was a livewire in the field with a terrific catch on the boundary at the end of New Zealand’s innings and even ran out Ross Taylor with a direct throw from the outfield! His bowling figures of 34 runs for one wicket in 10 overs were the joint best in the match in terms of strike rate along with Mitchell Santner.

The match was all but lost until Jadeja walked in to bat.

And the loss would have been massive if it had not been for him - India owes the narrow margin of defeat to ‘Sir Jadeja’.

Like in 2015, India's campaign has come to a sudden, grinding halt. Despite the bowlers firing at their best, the batting superstars have flopped badly in a crunch game. It begs serious questions of the line-up they played through the tournament.

Playing Pant at four was always a punt. Rohit was likely to fail by the law of averages at some stage; ditto for Kohli. But clearly, no special plans were made for such possibilities and that too in a knock out game speaks poorly for India's tactical preparations for a World Cup semi-final. Why Dhoni, India’s finest in handling pressure, was sent as low as 7 in this game is mindboggling, to say the least.

Congratulations, of course, are due to Kane and his Kiwi band.

They bowled and fielded brilliantly and their slow and steady brand finally emerged victorious against the fancied Indian side. They may not have eye-candy stroke-makers or super-talented young guns, but the Kiwis are a hardworking, utility team that works within its limits, uses its brains to the optimum and often punches well above its weight! New Zealand played the match on their strength and did not experiment. (Photo: AP)

India will do well to learn the right lessons and take a hard look at its team composition to perform better in future having squandered a great chance to win the World Cup. Ultimately, Virat's warriors fell way short of the courage and intelligence that helped Kapil's Devils to triumph in England 36 years ago!

Post your comment
#India lose to new zealand, #Semi final, #World Cup 2019, #Team India
The views and opinions expressed in this article are those of the authors and do not necessarily reflect the official policy or position of DailyO.in or the India Today Group. The writers are solely responsible for any claims arising out of the contents of this article.