Delhi Daredevils could give Kohli a hard time today

It may look RCB has a big advantage, but Zaheer's team can turn things around.

With a week to go for the Indian Premier League final, it couldn't have been a more interesting edition. As teams brave the heat and dust and criss-cross the country, they need to be ready for the last big push.

If in the past eight editions at least two teams looked certainties going into the playoffs, this time there is no such clarity. It only goes to show that the cricket in the IPL has been riveting with Virat Kohli and AB de Villiers hogging the limelight.

Their batting has been nothing short of murdering the bowlers and in a venue like the Chinnaswamy Stadium in Bangalore, it looks even better.

Kohli and de Villiers lead the "sixers" chart and if you ask the bowlers how it is to hurl the white ball at them, they will be able to share their woes.

As of now, from the top six teams in fray, any four can make it to the top four. Everything boils down to the last set of matches.

For the Delhi Daredevils, it was very well-timed win against Sunrisers Hyderabad on Friday.

It was a must-win situation and Karun Nair played a knock which was worth its weight in gold as he slammed 83 off 59 balls.

For a side whose form has oscillated between sublime and ridiculous not just this year but in previous editions as well, the Daredevils had their task cut out. 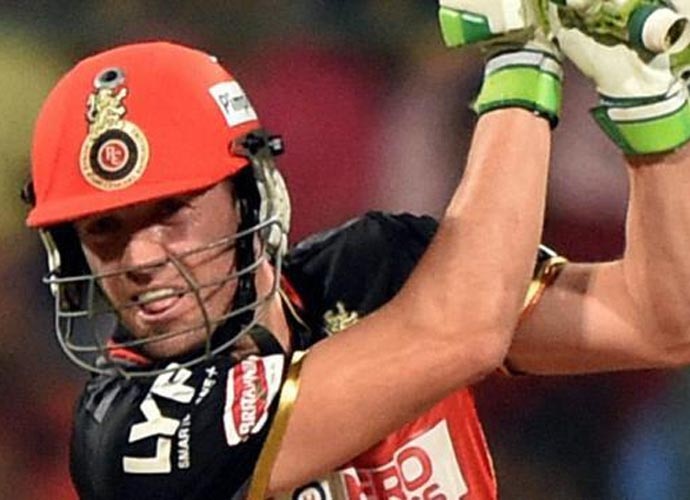 AB de Villiers is in an explosive form. (PTI)

They have a clutch of problems to deal with and the lack of consistency of the batsmen looks pronounced.

To be sure, the overseas batsmen have not batted with authority and between Nair and Sanju Samson, they have taken it upon themselves to ensure Delhi stay in the hunt.

The start for the Delhi Daredevils was shaky and the loss against the Kolkata Knight Riders in the opener severely dented their net run rate.

Add to it the results in two previous matches against Pune and the Mumbai Indians, and Delhi has flirted with danger.

Seen from a fans' point of view, some of the decisions the team management took while naming the playing XIs were beyond explanation.

To play three spinners against the Mumbai Indians was a reflection of how they had misread the pitch as from Shahbaz Nadeem to Amit Mishra and Imran Tahir, they could not do well.

Against the lowly Pune team, Delhi again did not do well and lost to MS Dhoni's side under the Duckworth Lewis method.

Even against the debutants who were shaky throughout the season, Delhi did not grab the opportunity.

All rests now on the big match against Royal Challengers Bangalore.

Also read - IPL 9: For Kohli, nobody's undroppable, not even Gayle

On paper, it may look Kohli's side has a big advantage, but Delhi need to play smart cricket.

Zaheer Khan's side does not have the explosive batting talent of Kohli, de Villiers and Chris Gayle, but Delhi bowlers are capable of striking.

The ground in Raipur is bigger than the one in Vizag and that's one reason why Delhi can do the unthinkable by defeating the Bangalore side.

Agreed, when you have three big hitters whacking the ball out of sight, the bowlers are under pressure.

This is where skipper Zaheer has to use his experience and wisdom and lead from the front.

People sang paeans about Zaheer and Rahul Dravid in the early stages of IPL 9 when the Daredevils were winning. Now the time has come for the think tank to plan a good strategy against Kohli's energetic bunch.

With JP Duminy not batting well, Delhi could even try out Sam Billings in the key contest. He can bat well under pressure and deserves a chance.

If one looks at the way IPL 9 has panned out, it has been held with clinical efficiency though shifting matches out of Maharashtra citing drought as the reason defied logic.

It put two teams - Mumbai and Pune - under pressure, though they have taken it in their stride.

There is talk of crowds dwindling in the IPL this time and that's something the organisers need to take a good look at.

For years, despite the sleaze and dirt in the IPL, the crowds had been lining up at the gates to watch the glitz, glamour and gladiators in action.

Whether it's a result of the IPL being held too soon after the ICC World T20 or fatigue for the fans in the shortest form of cricket needs to be looked at. The brand value of the IPL is at stake and the men at the helm of affairs cannot ignore this.

Then again, prime time is not just about watching the IPL on television before dinner. The TV viewers are using other options, more so since the Assembly elections also provided twists and turns of a different kind.

#Zaheer Khan, #Virat Kohli, #IPL 9
The views and opinions expressed in this article are those of the authors and do not necessarily reflect the official policy or position of DailyO.in or the India Today Group. The writers are solely responsible for any claims arising out of the contents of this article.