What Ryder Cup 2016 will be remembered for

The inherent unpredictability of golf and its turns and twists were perfectly played out.

My last detailed post prior to Ryder Cup (RC) was a priori projection explaining the context of the game.

We now know that the USA decimated Europe to dust with a scoreline of 11-7 - worst in last 35 years - which hardly anyone predicted. Reasons?

Like all group sports, be it football, baseball, cricket or rugby, it’s some individuals who eventually turn the contest on its head and something similar happened this year. Let’s note what happened at this year's RC.

The leader board, indeed, belonged to Patrick Reed who gave a virtuoso performance both as player and a "conductor", with putter in extended arm, becoming a baton to galvanise galleries to give guttural groans, grunts and roars reaching deafening decibels to create a cacophony reaching a crescendo creating country (read nationalistic) music, but missing the main element of harmony and melody comprising soulful sounds.

The "C'mon" command to comrades and crowd, complemented by exhortation that entailed euphoria, bordered on xenophobia that was never experienced at this scale in golf before.

Rory Mcllroy also did likewise initially but was restrained in later holes by falling into rear in the match and he couldn’t mount a rearguard action. One felt that Reed and Mckllroy became golf gladiators in a duel aren, egged on by frenzied crowds (60, 000 on Sunday, October 2). Reed’s clutch putts unclutched him from the gang of ordinary golfers and catapulted him into gallery of golf's greats.

In the process it left Rory, after the recent one million pay packet from FedEx victory, clutching barely for straws, to retreat to an Irish club with straw hat and lemon barley.

Some holes behind, Brandt Snedeker was repeating Reed’s act in a split mirror act. Somewhat similar but far more subdued roars one hears at Augusta’s Amen corner every year but at Hazeltine these roars reverberated across the entire course and course of the matches sans relief. 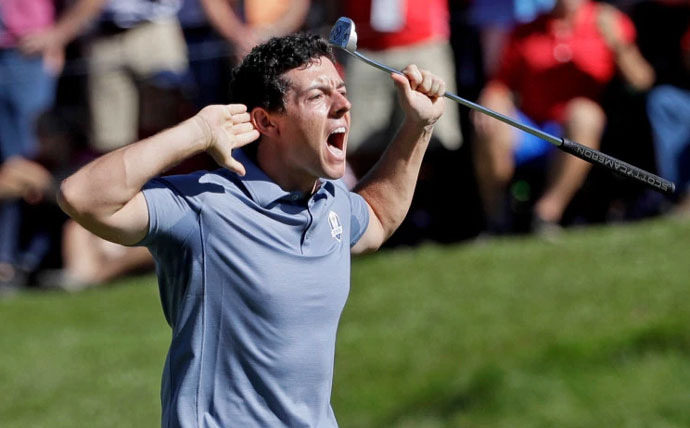 Europe's Rory McIlroy gestures to the crowd after making his putt on the eighth hole. (AP photo)

In the first two days, as stated, Rory roared both in sound and fury and in act, by leading from the front. Patrick Reed turned a friend in need for Jordan Spieth by carrying him on the final stretch singlehandedly on Saturday afternoon when Speith seemed to injure his hand possibly by plenty of palmy high fives, fist bumps, knuckle knocks and passion fuelling the hands movement towards unintended collision oblivious of adrenaline flow - like all teammates.

If it were a stroke play event, we would have seen surreal screenplay, scripting the same scene of Spieth’s shot going into water on par three at the Masters; but the joy of match play format helps makes life-long friends and extending helping hands and offering shoulders in an otherwise intensely lonely sport with none to lean on.

My prediction happily has hit the bulls eye in many respects:

(i) Reed’s passionate play particularly putting Rory’s roars into silence and reformed his reputation  from being cocky to become cocksure of conquering and also being credited with creative artistry around the greens.

(ii) Dustin Johnson intimidated but didn’t dominate as he hit water and missed putts, but he still won matches due to partnerships and an inconsequential end when he finished finally on Sunday.

(iii) Rory also had the momentum in the first and last match and lost close matches, though won in between

(iv) Team motivational maxim is not yet out but Arnie’s bag of 1975 victory on first tee was meant to motivate before every match. The exact motto would be out sooner than later and would confirm my hunch

I had pointed out the reasons behind the huge fan following for match play format of Ryder Cup. Brook’s Koepka’s slicey shank shot, watched  with shushed silence, gave joy to club golfers through identification that even professionals shank their famed shots , sometimes.

This RC would be remembered in witnessing a classic duel between Sergio Garcia and Phil Mickelson who exchanged 19 birdies between them (US team birdied a record 62 on final day unlike never before in RC). It is indeed great that match was halved and would have been a huge heartbreak if one had lost.

For once, Garcia’s putter was red hot and his final kiss, implanted on it, was testimony to his gratitude knowing how history is against him in putting record. One can only say "Gracias Garcia the Great" for gracing the game of golf, and for Mickelson for showing how golf is ideally played as a gentleman, with equanimity, grace and composure – so much so that his victory leap was just a minor take off of few inches from ground a la after his first victory at the Masters.

My last post explaining the inherent unpredictability of golf and its turns and twists were perfectly played out in the RC. The first three hours of the final day demonstrated how the match was evenly poised with no easy pickings for predicting outcomes. In fact, up to 12 holes the difference between two teams was of only one hole swing possibility except one.

Too much of frontloading the best players on final day individual matches is a good strategy to motivate the following players but if they are rookies (Europe had six and virtually unknown on US PGA Tour) or inexperienced, then the strategy can fail and equal and opposite reaction or reverse effect can take place - from front to followers if front leaders fumble, as it happened on Sunday.

In contrast USA had the luxury of having a larger pool of players with PGA Tour experience and this helped greatly. In alternate foursomes, the old strategy of pairing a top dog with a less gifted player didn’t work on the second day when Martin Kaymer was paired with Garcia though Rafael Cabrera-Bello was in top form in the morning and proved his match-winning talent on the final day again by comfortably winning his singles match. But I guess one has to give chance to all nationalities in the European team.

Competition at the RC is virtually an encompassing test of one’s character, composure, concentration and execution of consummate skill in totality, as most  players have to play 90 holes and that too over three days; whereas in regular PGA Tour tournaments one plays 72 holes over four days, with forenoon/afternoon tee times adjusted for first two days. In contrast, in RC there could be barely a gap of an hour or two before starting another round of 18 holes again. No wonder Rory stated that he finally ran out of steam on the back nine on final Sunday. Understandable with the load on his shoulders to lead and win every match to act as a catalyst for others.

Europe’s captain Darren Clarke ‘s benign avuncular look, accentuated by his salt and pepper beard/hair but his unlinked gaze, furrowed eyebrows, arms crossed across chest, arguing animatedly with Poulter gave away the inner turmoil in face of impending pounding on the final day.

Mass appeal of the present gladiator-like golf game in an arena will soon need relaxation of dress and colour code like we see in tennis majors except Wimbledon. This is likely to change the character of game-time is not far when playing in fluorescent colours and cargos would need to be allowed to professionals. And, one doesn’t know what happens if crowds like these begin to appear in Majors and money in millions is at stake.

Next RC would be in France and hope to see refinement of rivalry brought about through that famous book of golf etiquettes. Or, is this year the year of nationalistic yearnings as seen in Brexit, US elections and elsewhere? And golf can’t escape the trappings of the times we live in.

Last but yet lasting forever are images of players displaying the entire emotional spectrum that makes all human: fist pumping and chest thumping (virtually all players), embrace (virtual inseparable one between Davis Love and Ryan Moore on 18th hole that brought the Cup and all around), repressed anger (Rory cupping ears "I can’t hear you" and removing an abusing spectator), graciousness (Rory’s statement stating that it was all fun and games between Reed and him and that crowds were good for golf), acknowledgement and acceptance (Darren Clarke’s concession of opponent’s superiority), passion (Reed, Pieters, Koepka, Snedeker) regret and complaint (Danny Willet first apologising before the start and reconfirming his brother’s view on partisan crowd despite sport demanding hallowed bi-partisanship), and of course tears and tears (Davis Love, Bubba Watson almost replaying Olazabal’s teary outbursts after Medinah while remembering Seve Ballesteros), revenge (that Europe will bounce back in France).

And though not written all over but felt inside one’s soul of each one over there and all over - the single thought that Arnie watched all the drama from above and that all owe a lot to the Arnie for what he brought to the game. God bless his soul.

Adieu and alvida my fellow golfers.

#Golf
The views and opinions expressed in this article are those of the authors and do not necessarily reflect the official policy or position of DailyO.in or the India Today Group. The writers are solely responsible for any claims arising out of the contents of this article.