From Jammu to IPL 2022, Umran Malik's journey in 7 points

Umran Malik of Sunrisers Hyderabad (SRH) took his first five-wicket haul in a game against Gujarat Titans last night. Take a Look at Malik's journey from Jammu to playing IPL 2022.

Umran Malik, the young dynamic cricketer from Jammu is unstoppable. In the last match against Gujarat Titans at Wankhede stadium in Mumbai on April 27, 2022, the fierce pacer from Sunrisers Hyderabd (SRH) demolished the batting order of his opponents.

Blessed to take my first five-wicket haul in IPL, but a win would have made this even sweeter. We will keep fighting to win more games. #OrangeArmy pic.twitter.com/LOVdipz5f2

Though Gujarat won the match thanks to the heroic performance by Rashid Khan in the last over, the performance of Umran Malik stood out. In the eight matches he has played so far in IPL 2022, Malik has claimed 15 wickets with an economy of 7.97. His graph in SRH has been tremendous. 90% of his deliveries are above 150kmph. He has garnered a lot of appreciation from veteran cricketers like Dale Steyn, Michael Vaughan, Sunil Gavaskar and Irfan Pathan.

Here are the stats on his performance:

What went into making Umran Malik, the next big thing in Indian cricket? The story of Umran Malik from the lanes of Jammu to world's biggest T-20 league is as incredible as his bowling.

Here is his journey in 8 points:

Malik hails from a small village named Gujjar in Jammu. He has two sisters. His father sold vegetables. Malik would say that his two sisters were very supportive of him, even at times when his father wasn’t. But when Malik started to approach cricket professionally, his family supported him. 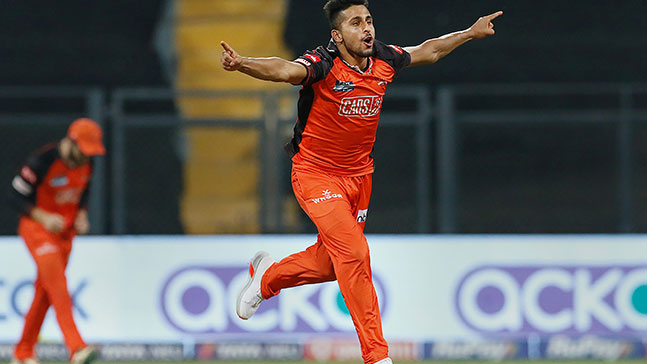 Much before he got into hard ball cricket, Umran was skilled in tennis ball cricket. He was a star player in his area and teams from other districts would scramble for him to play for them. And they had all the reasons to so. Malik with his sheer pace would win the matches alone.

It takes one talent to recognise another. Irfan Pathan, one of India’s best yesteryear bowlers took no time in assessing the talent of Umran Malik. Malik was introduced to Pathan by Jammu & Kashmir cricketer Abdul Samad, who was also retained by SRH. Pathan was J&K team’s mentor back then.

“When I saw him bowling the first time, he reminded me of Waqar Younis," Irfan Pathan said in a Star Sports video on Umran Malik.

From humble beginnings to beating batters with his ⚡ pace - #UmranMalik is winning all the ❤️!Catch more such inspiring stories on #Byjus #CricketLIVE, on the Star Sports Network & Disney+Hotstar. pic.twitter.com/6d7JxbxNOd

Pathan said that Malik had everything and he felt happy to see him bowl. The yesteryear cricketer also said that all Malik needed was proper guidance, and he was happy to take Malik under his wing.

Malik made his T-20 debut in 2021 when he played at the Syed Mushtaq Ali Trophy tournament for Jammu & Kashmir. He also made an A-class debut in the Vijay Hazare Trophy a month after that. His first class debut for India A vs South Africa was in November last year.

6. FROM NET BOWLER TO BEST BOWLER FOR SRH In 2018, he was spotted by the SRH scouts who roped him as net bowler for the team. However, he would not play until 2021, in the second leg of IPL in Dubai when team’s pacer T Natarajan was kept out due to Covid-19. Malik got his big break. Malik remembers the moment as the biggest one in his life. He said he went straight into Abdul Samad's room and said,"Bhai, tere bhai ka naam aa gaya."

In the first match against KKR, Malik in the first over had left an impression. He had clocked 150 kmph in the first match only. In his first spell only, he had kept the top KKR batters like Shubman Gill and Venkatesh Iyer on their toes. Though he went wicket-less in the four overs, conceding 27 runs, Malik had impressed everyone by his performance.

Ahead of the IPL auctions in 2022, Umran Malik, was surprisingly retained by SRH management for Rs 4 crore. This was in the reckoning because Malik ,in the three matches that he played in 2021 had bowled extremely well. He gained attention in a match against Royal Challengers Bangalore (RCB), where he bowled five balls in a row above 150 kmph.

While Umran Malik is leaving the country impressed by his performance on the field; his father, who still sells vegetables at a stall in Jammu is elated. Malik senior now wants his son to dorn the Indian jersey.

#Umran malik jammu, #Umranmalikipl2022, #Umranmalik
The views and opinions expressed in this article are those of the authors and do not necessarily reflect the official policy or position of DailyO.in or the India Today Group. The writers are solely responsible for any claims arising out of the contents of this article.