2017 US Open golf champion Brooks Koepka is no Tiger Woods

The US Open concluded this morning in India with Brooks Koepka winning with third lowest score in modern era and this championship saw 140 players marking sub par score cards - a record over 124 players recording earlier.

Ironically, after Trump triumph, US "open" society is steadily showing signs of shutting its shores, forgetting history that being open opened all closed doors to supremacy. Mercifully, there are still no presidential proclamations prescribing prohibition for professional golfers to play in US Open - not that there are any from countries of banned list.

As it is, despite the emitting impression of being an easy pursuit, golf with languorous stroll after languidly swinging a stick, hides hidden horrors and is one of the toughest sport to master. It is evident in 442 'Major' championships played in history (forget other world tour championships), one can count the masters of the game and the list wouldn't exceed ten.

Ask any professional player, who would undoubtedly utter concede that ultimately unpredictability and uncertainty constitute the core of the sport. If that wasn't enough, just consider that US Open so far has been played over fifty different venues spread across length and breadth of vast swathes of US landscape.

To impress the point and perspective, just consider that four majors in tennis are played on same surfaces every year whereas in golf except for iconic Masters, matching equally majestic Master Bobby Jones, other three Majors are played on different courses every year.

This poses a posse of challenges to all professional golfers and a challenge to predict a champion as seen in last seven successive major producing a first-time champion.

One knows, Brooks's brilliant ball striking brooks no comparison but simply stating the fact of his victory in a straightforward style steals the drama in a story. 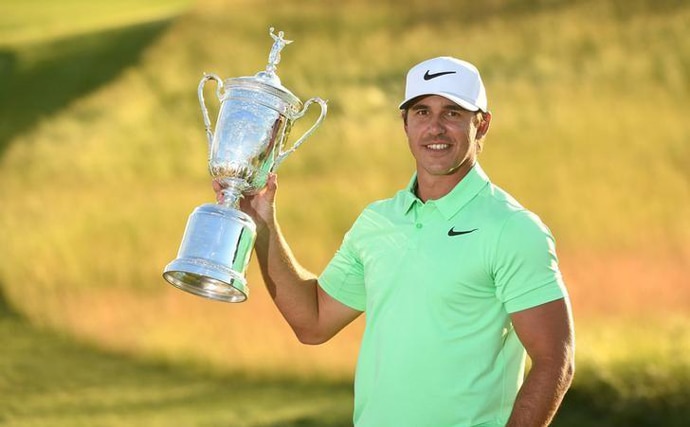 Like Tiger Woods, a fellow Floridian, he has massive musculature ( beefy biceps bulging even when holding lightweight trophy ) to motion ball over long distances; at ten ,had an accident, like Tiger had twice, but he came over to grinding golf practice and gain greatness by caressing Erin Hills golf course to alter his professional course but on the contrary, Tiger's professional and personal life went off course ; he equalled with Tiger( Pebble Beach 2000 )and Rory Mcllroy (Congressional 2011) for the lowest record of 16 under in US Open( only Rory and Kaymer have better 20 and 19 respectively); like TW on back nine homeward stretch in most Majors, he stretched his lead beyond reach at Erin Hills to reach record books and history; Brooks showed Tiger like focus all through four rounds proved by driving accuracy (averaging 307 yards and 4th most accurate of tee), fairways hit (88 per cent), 62 out of 72 greens hit in regulation (86 per cent) and averaging 1.71 strokes in putting - way better than 13/30 ratio of fairway/putting per round recommended by David Duval for winning at Wisconsin; Koepka can match the club head swing speed of 125 km/ph of Tiger Woods, besides Dustin Johnson (another Floridian native) .

This year's 117th US Open was played on Elin Hills Golf Course in Wisconsin. It is the longest (7,845 yards) course in Major's history and combined with 60 yards wide fairways (compared to half that at last year's Oakmont) will make one conclude that long hitters would overwhelm the course.

But a second look will reveal that its sloping terrain is shadowed by such long Fescue thigh-high grasses that roughs of British link courses could compare with easy going walk in teddy bear's garden.

Kevin Na stirred the hornet's nest by narrating the no rescue or clue to overcome Fescue grass nestling on the edges of fairways where ball location itself becomes the primary challenge, not playing the shot.

He advocated that professional players pool in and pitch for organising their own tournaments- like the way, the tour started originally more than a century ago. Ironically, it didn't affect his play on the first day and stated that his post be read in humour not as a critique of the golf course.

The course is considered a blend of two breeds and aptly called an American-Scottish hybrid course, where hybrid game of good length and iron play, not of hybrid clubs, would yield good results. Course's challenge of Wisconsin can make golf greats wilt and wince and wonder what went wrong to win. It was expected that winds, like link courses, would blow over four days but winds hardly blew except some minor breeze on the fourth day.

The winds were to cause woes to an extent that predicting a winner would be like an answer 'Blow 'in in the wind" The rain wasn't expected but it arrived and softened the scores and course allowing players to shoot under record under pars. So, the unexpected happened producing unexpected course conditions with totally unexpected results for top three and the eventual champion. And we haven't even mentioned the unpredictability of mental and physical part of swing necessary to win. Tiger Woods is famous for using his driver only once in four days on 8,500 yards Royal Liverpool golf course when he missed nearly all bunkers to win the British Open in 2006. If the wind had been a factor at Erin Hills, then one would have surely seen the adoption of a similar approach by most golfers. In other words, if the course had played with the wind as expected then results would have been as unexpected as the eventual winner Koepka.

The cut was one over par and was joint lowest ever. Amongst world's top twelve, eight actually missed the cut. Course length alone counts for nothing: despite endowed with exceptional skills of driving long distance, all top three (Dustin Johnson, Rory Mcllroy, Jason Day) terminated their trysts with triumph and walked away empty handed, without contending for championship or cash -not that they would miss latter very much going by their overflowing kitty.

Though to golf followers missing cut by top pros is acceptable but in other sports, it would be an anomaly and would be equivalent of Louis Hamilton not even qualifying to appear on Sunday race or Nadal losing in first round in French Open where he has won ten times.

Just last year Dustin dusted off the last hole challenge to win a Major for the first time and then he walked ceaselessly to claim world number one status. He even came close to winning the Fedex million-dollar jackpot that was lost by last minute skillful show of virtual ace by Rory McIlroy, who otherwise struggled to win whole year. This year, Dustin tumbled from stairs to miss Masters championship and again stumbled out of this US Open - perhaps owing to new parenthood.

Rory (as mentioned in my last article) continues to oscillate between brilliant play one day interspersed with pedestrian play and is yet to pull and put a four-day cumulative performance counting for the championship. Like his record-breaking victories, he needs first-day solid lead leading to victory. He is yet to show how he could spectacularly leap back to leaderboard from his first day massive drop off the lead- like Tiger used to do.

Daydreaming days of Jason Day reached dream realisation in reality, in 2015, by becoming world number one. After that, injury and personal life issues have delayed his recovery to ride again to reclaim the top spot.

Missing cut by world's top three reflected how mere driving distance wouldn't take one the whole distance to victory as all three drive long and straight if tour statistics are trusted. Their failure proved that one must not only have this skill in one's arsenal but also show tremendous will to muster mental strength and master muscle mechanics and then match these with shot making skills in a holistic way - euphemistically called the 'zone'.

This elusive condition should function well not over only 18 holes but over 72 holes and four days to count for claiming any championship.

Ricky Fowler continued to flirt with first win at Majors by equalling first day US Open record of seven strokes under, but despite reaching 11 under once to lead on second day, his performance petered out to playing around par ending as tied 5th and also tied with Lee Westwood with most top five finishes in Majors since 2010 . Fowler and Dustin are learning from Butch Harmon to butcher the courses and harmonise their motion to execute the perfect swing.

Paul Casey and Lee Westwood despite possessing physical prowess to power themselves to a podium finish, continue to come close but inconsistency caused their collapse while crossing the final hurdle. This time both showed their supreme skills especially on the second day but couldn't carry on their march to the mountain top of the championship.

Casey showcased brilliant play on the second day and but for triple bogey on 14th hole he would have been marching easily to top the leaderboard. He recovered to clock five birdies and showed how one should live moment to moment or one shot at a time comparable to concentrating one ball at a time in cricket.

Hideki Matsuyama continues to show his brilliance as he did by shooting bogey free 65 on second day and 66 again on fourth day to end as T 2nd . He showed that his stopping to stay still for seconds on top of his swing is not going to stop him, or affect his staying power for long, from winning majors, as with each effort he is coming closer.

Even last year Major winner Stenson seems to have lost the golden touch of straight hitting - his strength - and missed cut and similarly did Bubba Watson. Spieth despite enjoying a formidable reputation, of being the best putter on professional tour, couldn't overcome putting woes despite hitting 15 fairways (possibly best in career) in one round and ended tied 35 and after finishing ironically indicated to go back and work on his putting!

#Elin Hills, #Brooks Koepka, #Golf, #US Open
The views and opinions expressed in this article are those of the authors and do not necessarily reflect the official policy or position of DailyO.in or the India Today Group. The writers are solely responsible for any claims arising out of the contents of this article.