Athletes didn't shame India at Olympics, our sports minister did

Vijay Goel is singularly unfit to lead a revamp of sports in the country.

The Rio Olympics has ended with a disappointing medal haul for India. Despite an unprecedented number of Indian athletes qualifying for the mega sports event, India returned home with a diminished medal tally of one silver and one bronze, compared with six medals achieved in the last Olympics.

The performance looks much more disconcerting if it's compared with that of other nations. The second most populous nation settled for a poor 67th place in the medal standings. Leave alone any comparison with US and China which had 121 and 70 medals respectively, even smaller, impoverished nations like Kenya and North Korea fared much better than us, a supposedly emerging superpower.

The below par performance, must pave the way for a thorough introspection of what led to such a poor performance. Any such stocktaking will bring out an array of factors like mismanagement of sports associations, absence of a sporting culture, poor acclimatisation with the conditions in Brazil, inadequate sports infrastructure and bad luck (many Indians had trough draws and some missed medals by a whisker).

But the role of our sports minister in this underperformance deserves to be subjected to special scrutiny.

Also read: How long will India be satisfied with so few medals in Olympics?

Vijay Goel has hogged the limelight for all the wrong reasons during the Olympics. He has brought shame to the country and the august office of the sports minister and failed to perform his duties. This is how:

1. Failed to ensure basic support for athletes who gave their all for India

This Olympics was marked by the sheer lackadaisical manner in which the Indian officials dealt with their role of helping athletes give their best performance. Whether it was making Dutee Chand travel in economy class for 36 hours while themselves enjoying business class travel, or creating anxious moments in the boxing team when they ran into trouble over improper jerseys, or turning down Dipa Karmakar's request for her physio to accompany her, or to not even providing water and refreshments for marathon runner OP Jaisha during her race, the sports officials have done all they could to sabotage India's chances.

Jaisha fainted at the finish line and could have died because of such negligence by the Indian officials, who couldn't have been more unconcerned about the Indian athletes as they were in this Olympics.

Also read: Isn't it shameful that a country of 1.25bn wins only 2 medals at Olympics?

As the sports minister, Goel can't wash his hand of the misdemeanour of his officials. His defence, that the federations were culpable, doesn't wash, as many of the missteps were by authorities directly under him (like the Sports Authority of India, which had not allowed Dipa's physio to accompany her to Rio). Also if he is so helpless, then why did the taxpayers have to foot the bill for his presence there?

2. Maligned India by displaying "know who I am" attitude

Goel's sins were not just that of omission but also of commission. His entourage was making illegal entries into prohibited areas, so much so that the organisers had to warn that the minister's accreditation will be cancelled. At an event where all nations try to put their best foot forward, it couldn't have been more awkward for India than to have been called out for the high-handed and uncivil behaviour of its minister.

India is often subjected to scorn for the "know who I am" attitude of its public officials and Goel just ensured that such an image of India will only grow more persistent.

3. Hampering athletes in their performance

Goel barging into prohibited areas distracted our athletes. Instead of focusing on their performance the athletes were made to humour the selfie-loving minister. In a high stake event where even the minutest of things is the difference between winning and losing, this hampering of athletes by none less than our sports minister couldn't have done any good to India's performance.

4. Humiliating athletes and undermining their self-respect

Goel disrupting athletes for selfies also amounted to humiliating them. For, these athletes strive all year round to attain perfection for Olympic glory, but even on the days that the Olympics are on, when they are the cynosure of all eyes, they are forced to be trophies for ministers and bureaucrats, forced to pose for selfies. This demeans our athletes. Is it too big a thing to ask a minister to let our athletes bask in glory for once?

The disrespectful manner in which athletes were treated was also revealed during an Independence Day dinner hosted by the Indian embassy, when the athletes were fed peanuts, tea, coffee, juice and cookies, instead of a full-course meal they had expected, having already skipped their dinner at the Games Village.

Now surely, a minister can't pretend to be helpless about the conduct of an embassy of his own government.

The sports minister's many gaffes also included wishing contesting athletes with posters that focused more on him than the athlete. For instance, in the picture accompanying his tweet wishing boxer Shiva Thapa on the eve of his contest, Goel appears prominently and Shiva makes a small appearance as if as an afterthought.

This picture exemplifies what's wrong with Indian sports. Instead of being about the sportspersons, it has become all about the politicians and bureaucrats who have hijacked sports management. 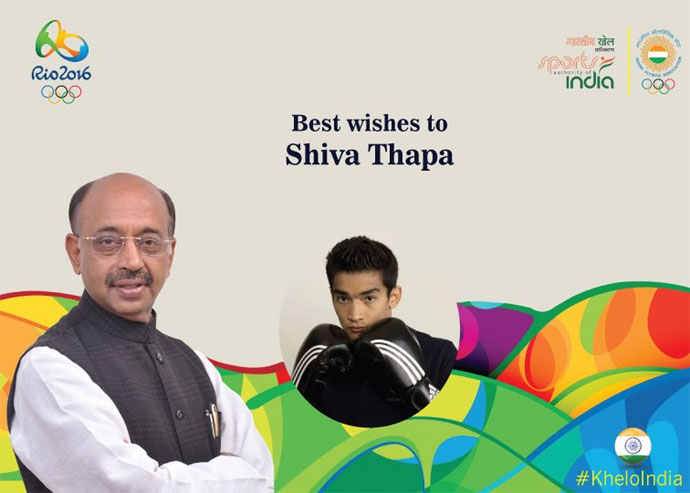 Goel appears prominently in this picture and Shiva Thapa makes a small appearance as if as an afterthought.

Goel's obsession with himself was such that he didn't even care about getting the names or photos of the athletes right. He misspelt Dipa Karmakar as Dipa Karmanakar and wished Srabani Nanada with a photo of Dutee Chand. One can excuse for a moment our sports minister being ignorant about our Olympians' names but surely he could have checked their names and photos instead of disclosing both his ignorance and lack of respect for our Olympians?

At a time like this, when the need for charting out a new course in sports is felt more than ever before, Goel's self-important attitude, his poor supervision of facilities for Indian athletes, his ignorance about India's leading sportspersons, his lack of respect for them and the way he bossed the Olympics organisers around makes him singularly unfit to lead this revamp.

As a measure of accountability for his missteps and gaffes during the Olympics, and for his unsuitability to lead Indian sports in these testing times, the prime minister must ask Goel to put in his papers as the sports minister and assure the country that the sports ministry will be a facilitator and not a hindrance in reviving sports.

Post your comment
#Dipa Karmakar, #Rio Olympics 2016, #Vijay Goel
The views and opinions expressed in this article are those of the authors and do not necessarily reflect the official policy or position of DailyO.in or the India Today Group. The writers are solely responsible for any claims arising out of the contents of this article.