Has Virat’s victory-virus infected Kedar Jadhav and others in the Indian team?

Few will remember Jadhav's maiden one-day century against Zimbabwe. Few will forget this one against England.

Kedar Jadhav will turn 32 this March. His turn to play international cricket came a little over two years back. Since then, he’s played less than 20 games for India. Jadhav wasn’t always a regular in the Indian team, except when they flew to Zimbabwe. Where he scored his first one-day century. Few will remember that one though.

Few will forget this one against England. Openers gone, Yuvraj and Dhoni gone, that much mentioned score, 63/4, and the inevitability of the situation and the target facing him. What did he have going for him - he had scored eight centuries in List A cricket, 13 in first-class, he was a journeyman cricketer of sorts, his mom and dad and wife and child were in the stands – but beyond that, his captain, he of 26 ODI hundreds, was at the other end.

If you wanted to chase down any target, there was no better man to chase it with – he could be his own engine and yours too, he could be the wind, the words, and just the belief you needed to see – for Kedar Jadhav’s dare to dream big was as much as a look into his own desires as a look into Kohli’s eyes.

They had the know-how of scoring 26 centuries – of which six were made chasing targets in excess of 300. Kohli’s eyes gave Jadhav a peep into 14 centuries scored by him in successful run chases.

And as Jadhav continued to draw on his own abilities, he saw, right in front of him, something magical happen – something that went beyond the 27th ODI ton and the 15th ton scored in a successful run chase. He saw his chats with Kohli in the dressing room play themselves out in the middle. He saw how you chase a fairly unlikely target from a situation gone horribly wrong. 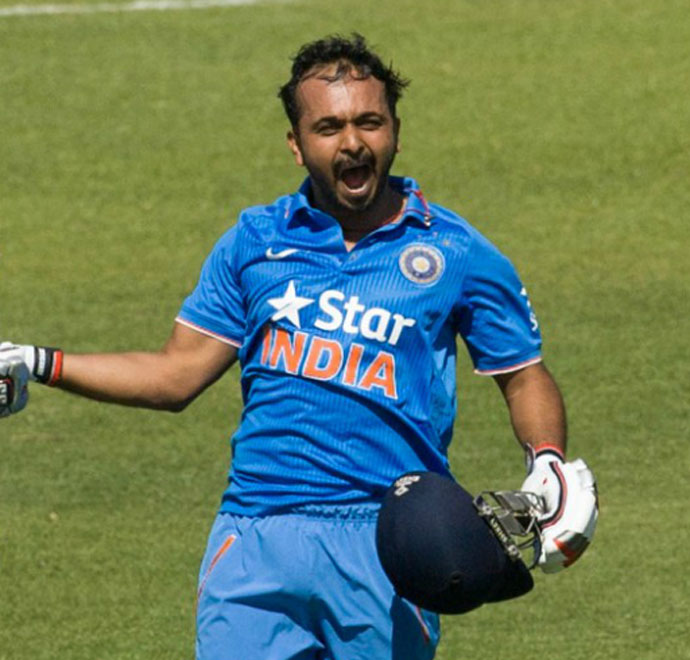 Kedar Jadhav scored his first one-day international century in Zimbabwe. Few will remember that one though.

Just when it appears you have your backs to the wall, you push the walls back – the walls can be your own inhibitions or the bowlers coming at you ball after ball. You free yourself of defeat because right then it appears the game is already lost.

His captain counter attacked, played more in the air and over the top than he had in recent memory. The calculations had gone for a toss because there was nothing left to calculate. At 63/4 in 12 overs, there were no repairs to be made – it was burn down the house in the hope that the flames would take England down as well.

When your captain frees you to attack, like hell, you attack. There was nothing in the pitch, not much in the bowling, it was a tiny ground, it was home. It was his home ground. It was all blue in the stands.

From the word go, Jadhav was in overdrive, scoring way more rapidly than Kohli. While Kohli’s presence at just over run a ball gave India comfort and control, Jadhav’s boundaries shocked – they appeared to come out of nowhere.

Unlike Dhoni and Yuvraj before him, there was no illustrious international CV that preceded him. He was just doing his thing, whether it was timing through the covers for six, or swiveling away to the square leg boundary for four. It looked like Jadhav was having an IPL net session against an IPL team in his IPL backyard.

It seemed that simple, he seemed that assured. And while Kohli reached his 50, and sixed his way to a hundred, you had Jadhav’s innings hurtling down unannounced on some Rapid Transport System.

It seemed quite unbelievable, except when Kohli taunted his little partner to run faster or run a second even when there wasn’t one. In spite of those taunts, Jadhav was unfazed, like some veteran of 74 first-class games in his own little kingdom. Invariably, these taunts would be followed by a nonchalant boundary.

Just as when the cramps appeared as he closed in on his century, the boundary appeared again, 96 became a 100. England still didn’t know what had hit them. It still didn’t look like an amiable little guy like Jadhav could hit them that hard.

By then, Virat Kohli had reached superman mode and hit a six that had WTF written all over it.

200 runs and 25 overs later, when Virat Kohli fell, and the cramps weren’t getting any better for Jadhav – he had seen enough into those eyes to know and believe that the game was already in the bag. With that belief, cramped Jadhav, in spite of collapsing at the crease, hit two more sixes and a four after his hundred.

And in the process, Jadhav scripted some ODI history:

Jadhav's strike rate of 157.89 for his 120 (76) is the eleventh highest strike rate for a second innings hundred in ODI history. #IndvEng

After winning the Man of the Match award, Kedar Jadhav thanked Virat Kohli. It was a moment of rare honesty and emotion, both Jadhav and Kohli seemed quite overcome. Few things can give more satisfaction than sharing knowledge.

Virat had just taken Jadhav through the 36 chambers of Kohli’s Shaolin, on the sidelines and in the middle. Perhaps, a bow followed by a hammed “Master!” in a dubbed Chinese accent would’ve been appropriate.

#Kedar Jadhav, #Virat Kohli, #Ind Vs Eng
The views and opinions expressed in this article are those of the authors and do not necessarily reflect the official policy or position of DailyO.in or the India Today Group. The writers are solely responsible for any claims arising out of the contents of this article.