Original ideas were killed in the making of this post.

To eke out a few Likes on Facebook, some thugs will pass off your updates as their own. If they could, they'd pass off your selfies as their own. Not surprising then, that a bunch of FB cricket pages (with hundreds of thousands of followers) do this day in and day out, post after post. Do they hire a bunch of underage kids, lock them up in a sweatshop and make them pry through trending topics - "oh wow! #IndvsPak, #ViratKohli, 231 Likes, 159 shares, Troll sir very happy when he sees this".  Ace photoshoppist @NotDavidWarner nails it - "Facebook? Don't even bother trying to police. At least 20 crappy meme sites exist, and they have no talent other than stealing content, just make your watermark bigger than theirs, if that's possible."

A message from @TheGoanPatiala informed me that my Shikhar Dhawan cartoon was doing the rounds on Whatsapp - only it came with a massive Troll Cricket logo, and if that wasn't enough, it had a TM too. My signature and credits had been removed. I first posted this Dhawan cartoon on December 31st, 2013, with the World Cup and Dhawan's form on the up it called for a twist. I posted it on 10th March, 2015 again, within an hour and a half it had been reposted by Troll Cricket. Their brazen branding and Trademarking of my work, made me mad. I was determined to show them for what they were - next, I fully expect them to pass this piece as their own.

My first such experience was when a Kohli-Dhoni cartoon appeared on a cricket website without my consent. I mailed the site but they only paid up when I shared the screenshot with them. Next @hashtagcricket alerted me - my old Baba Ramdev cartoon had resurfaced on a hardcore commercial website (with close to a million followers). There was both an apology and a willingness to take the cartoon down. Having spoken to cartoonist, Satish Acharya, about this, I was in no mood for their nonsense; this is what I told them - "My cartoonist friends and I have faced this problem way too often - we have arrived at only one conclusion that those using content without permission should pay for it. I'd appreciate if you could please pay me Rs XXXX- for using my cartoon on your website." Once again the screenshots helped in a prompt payment. Here's @NotDavidWarner on some of his forgettable experiences - 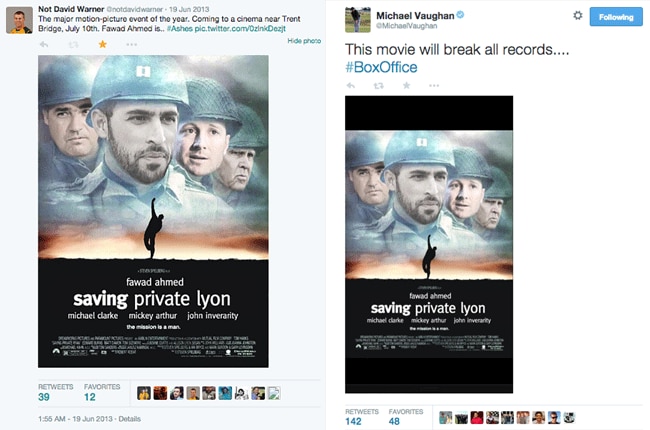 "Cricket Australia was flying Fawad Ahmed to the UK at the start of an Ashes' series to sure up their spin bowling ranks. By chance I created a #boxoffice film poster called "Saving Private Lyon" with the relevant characters Photoshopped into the relevant places. It was brilliant, but I had never warmed up to watermarks. Twitter was abuzz, unfortunately it buzzed when THE Michael Vaughan tweeted my image, sans watermark, sans credit, and being the first humorous cricket related Ps image to hit Twitter - it was a success. I was bitter as f***. I vowed never to leave a watermark off an image ever again - unfortunately my design sense still forces me to try and hide it in the graphic, unlike our friends at Troll Cricket who will slap an ugly logo across the protagonist's face just so that people think they created the image. Haha, as if. They are as untalented as they are unethical, and luckily they have slowed down in stealing my stuff since I called them out on Twitter.

Some of the bigger Twitter heists I have suffered/ can remember with names that I can think of?@MichaelVaughan (via @nickobrady26) popping my stolen image cherry (142 RT)@warwicktodd_not Enjoying the fruits of my Channel 9 pitch map meme, even giving credit to some half-arsed FB site who stole it from me, all the while my watermark stuck out like a white guy at an NWA concert. (309 RT)@SriniMama16 wanted a piece of the Phillip Hughes pie. Everyone else was mourning, he was stealing. (1.3K RT)Plenty more I can't be bothered to count, most recently AB de Villiers 'fastest 100 race' with Usain Bolt. (TooMany RT) - thank god Harbhajan Singh RT'd the real tweet, restored some faith. @HahaCricket serial offender. Worst of the worst. An ex-employee of theirs recently apologised to me on Twitter for their constant plagiarism."

"My sportskeeda article was Anu Maliked by someone. I immediately complained to the editor and they were quick to warn the pirate" - @TheGoanPatiala  " It's been happening to my cartoons also. Want to take legal action, but don't have enough time to chase lawyers and all. May be you should consult a lawyer friend." - @SatishAcharya Editorial Cartoonist.

Satish, I really would have liked to consult my lawyer friend @IslandExpress, but he's honeymooning in Vietnam.

I'm on Twitter, watching the tweets roll by, it's 12:25 AM, still high tide. @saeedsherazi tweets an image to @karachikhatmal in the hope of a Retweet, what else - it's a hilarious image, even funnier when you consider the text that goes with it.  It's been lifted word for word. I can't help myself. I tweet - The image belongs to @notdavidwarner

This is a collaborative post. Please do comment if we missed a mention; if you want to expose an online thug, tweet to us @BoredCricket and @notdavidwarner

#Trolls, #Social Media, #Piracy, #World Cup 2015
The views and opinions expressed in this article are those of the authors and do not necessarily reflect the official policy or position of DailyO.in or the India Today Group. The writers are solely responsible for any claims arising out of the contents of this article.