How WrestleMania 32 broke its 29-year-old record

The Undertaker truly lived up to his reputation.

On April 3, WWE shattered a nearly three-decade-old record. WrestleMania 32, the annual flagship pay-per-view (PPV) of the Stamford-based company, drew a record 1,01,763 fans to the AT&T Stadium in Dallas. "The Showcase of the Immortals" as WrestleMania is often termed didn't have it easy en route to its 32nd edition.

A slew of injuries to top stars including John Cena, Randy Orton, Seth Rollins and Daniel Bryan made the record shattering spectacle almost improbable. But Vince McMahon saw to it that WWE managed to better WrestleMania 3 which had so far remained the most attended WrestleMania. It saw the legendary Hulk Hogan bodyslam Andre The Giant much to the shock of 93,173 fans.

So how did WWE manage to put together a wrestling card which eventually bettered the attendance record set 29 years ago?

The closing match on the card was for the WWE World Heavyweight Championship. It featured 14-time world champion Triple H and Roman Reigns. Reigns, who happens to be the cousin of Dwayne "The Rock" Johnson, has for long been pushed as the top baby face of the company. 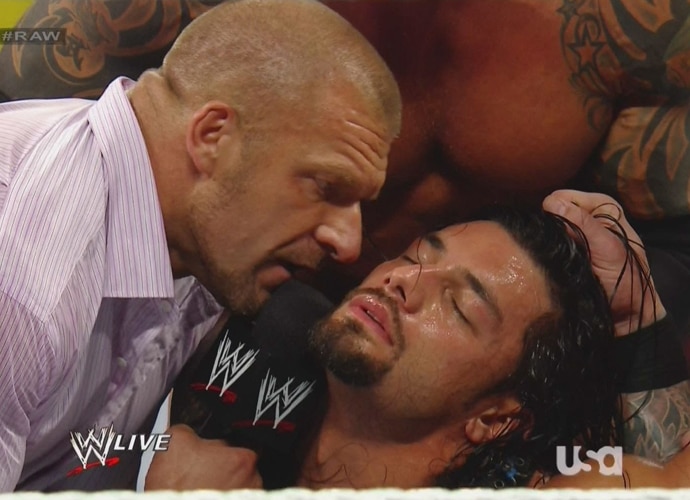 When Roman reined in Triple H.

Despite opposition from a section of fans who continued to boo Reigns at AT&T Stadium, WWE creative ensured Reigns' victory at WrestleMania 32. The match concluded with Reigns delivering his finishing manoeuvre called Spear to a sledge hammer-wielding Triple H.

But WWE will have to do a lot more to elevate Reigns' stature. When it comes to popularity, he is nowhere close to matching the fan base of legends like Hulk Hogan, Stone Cold, The Rock and John Cena. However, a long title run following WrestleMania 32 will likely provide Reigns with an opportunity to set up his Roman empire. As WWE struggles to find a successor to John Cena, the company seems to have for now pinned its hopes on Roman Reigns.

The Undertaker has had a reputation of stealing the show at the grandest stage of them all. WrestleMania 32 was no different. Two months back nobody could have imagined a 51-year old Taker wrestling Shane McMahon inside a Hell in a Cell. But the match did take place and that's what makes WWE thrilling as a product since it throws up unexpected storyline twists.

Though wrestling legend Bret Hart termed the idea of Vince McMahon's son fighting The Undertaker as full of "nepotism", the fans appeared to have appreciated the match like none other. This was evident as one could hear fans periodically chant "this is awesome" as Taker and Shane tore apart each others' bodies in a 30-min long contest.

Shane McMahon took a 20ft fall from the top of the steel structure to provide WrestleMania 32 with the ultimate photo-op. The Undertaker sealed the deal by taking his WrestleMania record to 23-1 with a Tombstone Piledriver. Come WrestleMania 33 and fans would eagerly await Undertaker's 25th WrestleMania appearance but the question really is: does the Undertaker have one more match to deliver? That's something which only time will tell.

To make up for the injury losses, WWE paraded a host of legends much to the delight of fans. These included Stone Cold, Shawn Michaels and Mick Foley. The event also saw a surprise match featuring The Rock which lasted for just six seconds.

The Rock's victory over Erick Rowan was followed by the return of John Cena. Together the duo dismantled the Wyatt Family and left over 1,00,000 fans at Dallas in a state of ecstasy. But cameos are short lived. Cena will remain sidelined for a few months due to an injury which forced him to sit out of WrestleMania. On the other hand, The Rock will concentrate on Hollywood.

Another highly anticipated match at this year's WrestleMania was the No Hold Barred Street Fight between Dean Ambrose and Brock Lesnar. Considering Lesnar's billing as an indestructible conqueror, it seemed highly unlikely that Ambrose would be able to pin him for a victory.

The stipulation which allowed the use of weapons provided "The Lunatic Fringe" with an opportunity to draw level with Lesnar's brute force. But at the end of the day it was the former UFC Heavyweight Champion Brock Lesnar who walked out with his arms raised high.

Even in his loss, Dean Ambrose won. Unlike Reigns, he is a perennial fan favourite. While Ambrose does need a big win to challenge the Roman Empire, he is indeed moving in the right direction. Losses to Triple H and Lesnar at Roadblock and WrestleMania, respectively are bound to catapult him to the status of a main event star rather than an all-season mid card player.

WrestleMania 32 leaves behind an open debate. Who should be given primacy at "The Show of Shows"? WWE has often been asked to choose between wrestlers who are on the road for over 300 days during the year and part-timers who show up only during big events.

If the likes of Triple H, The Undertaker and Brock Lesnar are bound to headline WrestleMania without wrestling throughout the year, then where does it leave the rest of the locker room? The debate has been around for quite some time now.

The solution lies in ego balancing. You can't take the company forward without investing into new stars that are all full-timers. But you can't make new stars without having them go against the best of the best. "To be the man, you gotta beat the man."

Therefore, a clash between full-timers and part-time legends is inevitable. But the WWE has to ensure that attention is divided. A company which invests primarily in stars of the previous era is doomed to fail. It has to keep cultivating newer and better performers for the future.

Post your comment
#WrestleMania, #WWE
The views and opinions expressed in this article are those of the authors and do not necessarily reflect the official policy or position of DailyO.in or the India Today Group. The writers are solely responsible for any claims arising out of the contents of this article.