It’s about the stillness – if his bat doesn’t get you, his gaze will.

Yuvraj Singh has just collected his Man of the Match trophy; he’s asked to stand between three beaming middle aged men who form the presentation party. Yuvraj complies. He stands there, with them, still. Almost like stone. Almost stoned.

Before that, Ravi Shastri interviews him, congratulates him, applauds him, applauds his partnership with Dhoni – there too, Yuvraj is still. Focused on his answers, which have clarity, simplicity, he says nothing more or less than needs to be said. Shastri quips about marriage working for him – Yuvraj matter-of-factly mentions lady luck, going on to thank his mother and Guruji. Yuvraj’s smile, that smirk of old, the wisecracks, they’re missing. 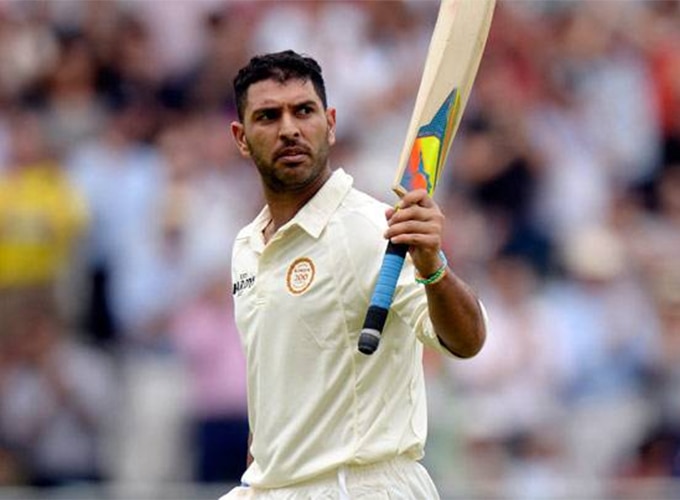 At 35, making a questionable comeback, yet again, Yuvraj has little left to prove to anyone – what is left to prove, is perhaps, only to himself. Possibly the most watchable batsman of his generation, the beard suits this new sadhu like avatar of Yuvraj.

Yuvraj last scored an international century in that World Cup he won for SRT in 2011. Since then his journey has been well documented, and will continue to be documented, repeatedly – The Yuvraj chronicles are about the six sixes, the World Cup, the aftermath, and the incredible comeback to cricket after cancer.

But there was only so far that reputation of the 2011 World Cup and the 2007 World T20 was going to take him. Here in 2017, more than his fans, Yuvraj appears to inhabit the present.

He looks leaner, way meaner than he has in an age. The eyes seem hungrier, almost on a hunt, ready to prey on the bowling. As in the recent past, Yuvraj scored First Class runs and was picked for the national side. Unlike before, Yuvraj and his bat surged away to a big hundred – his highest ODI score, 150.

Throughout his innings, it was as if Yuvraj had not moved. It was as if he was a robotic replica of the Yuvraj masterclass, perfected in the laboratory to regain that lost zeal, to recreate that magic of old, from a fading memory.

The movement was that slight, it hardly registered. The shots, as you come to expect of trademark Yuvi shots, are in these swooping, majestic arcs – as if a supremely quick dancer has just struck a pose, and you’re left baffled with the final pose that you can barely recall what happened before - and whatever must happen, happens.

In this case, it’s that high bat-lift swooping down so fast, you almost expect cartoon speed-lines next to his bat. But did the bat move? Or did Yuvraj move?

Yuvraj Singh’s movement only registers when it’s awkward. When he’s amateurishly fishing outside off, tying himself in silly knots against the shorter stuff or prodding against an off-spinner. That’s when his flow is dammed.

But that was not the Yuvraj of Cuttack. It took him nine deliveries to get going with his first four, also the only time he looked rushed by the short delivery. Within five balls, he had three boundaries.

Yuvraj Singh, the video game, was at the crease. It was as if you and me had the joysticks. And even though Yuvraj hit 21 fours and three sixes, he ran 48 of his runs and 46 of Dhoni’s, at no point did it appear as if he ran at all.

Coming in at the fall of Virat Kohli’s wicket at the end of the third over, Yuvraj Singh batted till the end of the 43rd over. He batted for over three hours. When he was dismissed, he seemed to have barely broken into a sweat.

Why would he, he had barely moved through the innings.

He was with Dhoni, and Dhoni was him. Deep down he knew that for any opposition that was a frightful prospect. And for them to stay in that fright, all they had to do was stay put.

Which they did, like the immovable objects that they are.

Also read - Is Yuvraj Singh to Virat Kohli what Suresh Raina was to MS Dhoni?

Post your comment
#Comeback, #Update, #Yuvraj Singh
The views and opinions expressed in this article are those of the authors and do not necessarily reflect the official policy or position of DailyO.in or the India Today Group. The writers are solely responsible for any claims arising out of the contents of this article.