Asus Zenfone Max M2: The good, the bad and the ugly

The Zenfone Max M2 is an interesting option for buyers in the segment, and as such, is worth taking a closer look at. Here's our take on it.

It was a good 2018 for the Taiwanese tech giant, Asus. Through the year, it launched multiple blockbuster phones which undercut competing offerings in not just price but at times features and overall value too. And one of the phones that very much sums this up is the Asus Zenfone Max M2.

The budget-segment offering launched towards the end of December 2018 brought with it a good mix of features and impressive core hardware at an aggressive price to make a foothold in the crucial segment of the market. However, the device recently got a price cut and is currently available on Flipkart for as low as Rs 8,999 for the entry-level 3GB RAM and 32GB storage variant and Rs 10,999 for the 4GB RAM and 64GB storage variant.

The new price thus makes the Zenfone Max M2 quite an interesting option for buyers in the segment, and as such, worth taking a closer look even after two months of its launch.

We've used the device for a while, and here's a low down on the good, bad and the ugly about the device. One of the better things about the device is its build and design.

Despite being a little industrial in terms of design, the phone excels when it comes to the build quality. Instead of going down the glossy glass/ plastic back road, Asus has used metal to craft the rear panel of the phone. The frame of the phone has been made using toughened plastic which melts into the glass panel fitted on the front.

Although this decision makes the device not stand out as much as some other phones in the segment – or even it elder sibling the Max Pro M2 for that matter – it does give the Max M2 a solid feel to it.

Another good thing about the device is its weight – a consequence of some intelligent work by the design team at Asus. Let me explain.

By using matte finished plastic as the element of choice for the frame, Asus has intelligently balanced the weight of the metal back and managed to provide the phone with the kind of heft which makes it pleasant to hold in the hand. The use of the particular material also gives the device a nice two-tone finish which is quite appealing to look at. 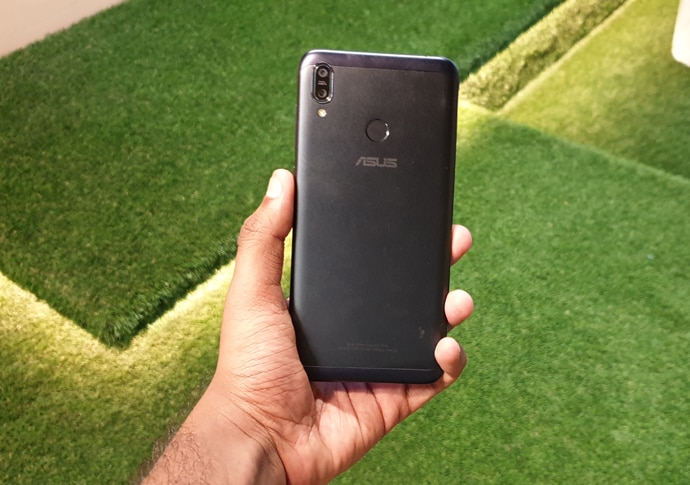 Moving on, the phone also packs some impressive tech for the price under the hood.

The device is powered by an octa-core Snapdragon 632 chipset paired with up to 4GB of RAM and 64GB of storage. This particular combination paired with stock Android – slated for an update to 9.0 Pie – provides the phone with above par performance for the price.

As a result, the device performs well during usual day-to-day tasks such as browsing, calling and even tackles most games quite well on up to medium graphical settings.

This backed by the impressive battery life of the device ends up being another positive for the phone. Keeping the lights on the device is a massive 4000mAh battery pack that paired with the efficient 632 SoC and low-resolution display got us through almost two days of moderate use on a single charge. However, the low resolution of the display, which despite being a positive in terms of battery life, does end up being a con when it comes to usage.

Although, the overall performance of the notched 6.26-inch IPS-LCD panel is satisfactory – owing to its adequate brightness and good viewing angles – the slightly low pixel density of 269 ppi and the HD+ resolution do serve as a cause for disappointment – i.e if you're really looking for one.

Having said that, when you factor in the price that the phone is being sold at, Asus' decision to use a 720p panel on the Zenfone Max M2 starts to make more sense.

But the same cannot be said about the camera performance of the phone. Definite corners have been cut here and considering how camera performance has become central to the success of phones across all price segments, Asus could have surely done more to improve the picture taking prowess of the Zenfone Max M2.

At the back, the phone features a 13-megapixel lens with an f1.8 aperture and 1.12um pixels. Partnering this primary lens is a secondary 2-megapixel depth sensor and an LED flash. Now, on paper this sounds about average for a phone in the price range.

However, as we've seen from Asus phones before, in the real world, performance wasn't as much.

When fed with adequate light, the rear camera gives decent performance, but the device does tend to take in a bit too much light at times and pictures, as a result, come out a little over-exposed. Things get even worse when you take the camera out for a spin in low-light conditions. Pictures come out lacking little detail and colour accuracy also takes a little bit of a hit. Well, there isn't anything particularly ugly about the phone.

Even the cons of the phone can to an extent be explained as a consequence of the aggressive price tag of the Zenfone Max M2.

However, if you're craving for the ugly is not satiated and the inner critic in you wants something to latch onto to, then sample this.

The device comes with a Micro-USB port, which to be honest, was a pain for me as I generally use Type-C cables with most other phones.

Apart from this – first world problem of mine – the Zenfone Max 2 proved to be a solid companion during the time I used it and, as such, comes recommended for anyone looking to buy a device in the particular price range.

Also read: Imran Khan in denial over Pulwama attacks - a waste of videotape and air time

Post your comment
#Discounts, #Review, #Price, #Specifications
The views and opinions expressed in this article are those of the authors and do not necessarily reflect the official policy or position of DailyO.in or the India Today Group. The writers are solely responsible for any claims arising out of the contents of this article.